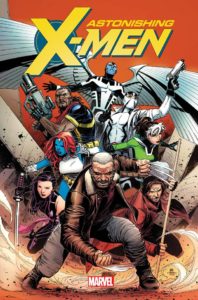 So I have already discussed the other titles coming out of this ResurreXion event, but now they just fully released another title called Astonishing X-Men.

Marvel had been releasing images of the team slowly, at first. So this is the final image of the team and the title of the book. So let’s take a look at the roster we have, because over all this looks like a pretty solid team.