Comic Relief Podcast – Issue #15 – Welcome (Back) To The Podcast, Hope You Survive the Experience. 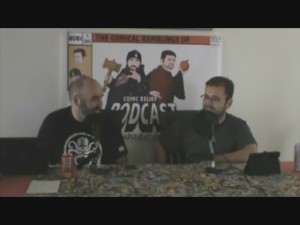 So, it’s been awhile since we’ve released a new issue of the Comic Relief Podcast -… well, podcast! Last time, as a matter of fact, was March, 2015. That’s right, we’re talking just about 7 months ago. (I can’t even believe it’s been that long!) Well, as it would turn out, we actually attempted to do something a little different in April of 2015 – and do a Video Podcast. However, the kids were there, the television was on in the background – and no amount of editing was going to make this do-able (mostly because I try to make these sound and be every bit as professional sounding as possible; and still have fun!) Well, there was just a lot of background noise and interruptions, so the video went into the back burner. Well, just the other day, I realized how long it had been since we put out a podcast, and I thought, “I should dig out the video we did; edit the video, put it on Youtube, and then rip the audio from the video and just make that a podcast – with interruptions, poor sound quality, and all! Just – let it go! It’s October (and tomorrow is Halloween!) – so why not unleash a spooky sounding episode?”

We have not had the chance to record, due to things happening at our job (that took Maico away for several business trips, for quite a few weeks!) – and just drastic things happening all around! But things are beginning to find their pace again, and we hope to record a proper podcast where we can talk about all these shows that have just started their new season – and including some new shows, such as Supergirl!

In the meantime, here’s the audio from the video podcast, back in April 2015 – keep an eye on our Youtube channel (I will link it here too when it finishes uploading!) for the actual video itself!

If you don’t want to stream it – and want to download and treasure the MP3 forever – you can download it right here. (Right click and SAVE AS…)