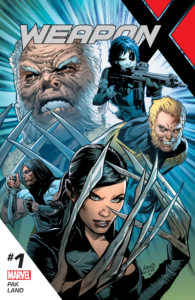 Taking a look at several of the ResurreXion titles, I thought I’d share some thoughts. I already covered X-Men: Blue and X-Men: Gold.

First, let’s take a look at Weapon X. Though the book is called “Weapon X” the team that the book revolves around is not actually the team “Weapon X.” As it turns out, they’re just a band of mutants fighting the newly revamped organization called “Weapon X” which no longer seeks to use mutants, but rather sets out to exterminate them. So Old Man Logan and Sabretooth apparently pull a team together that consists of them, as well as Lady Deathstrike, Domino and Warpath. Now the main thing that concerns me is this Weapon X program going out of their way to exterminate mutants… I can’t help but feel, in order to legitimize the “threat” that Weapon X poses, some potentially unused, low level mutants may meet their demise. But the book has Sabretooth and Warpath, and the art looks pretty clean. So I will pick up the first issue and see where that takes me. 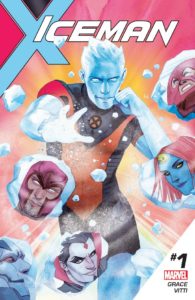 CBR calls him one of Marvel’s most prominent gay characters, but I don’t think he’s more prominent than Northstar. Because Northstar coming out was a big deal. He’s also had a full on wedding to his then boyfriend. But – that’s neither here nor there. (Well, I suppose it is here).So while this series will focus on the “616” Bobby Drake, I am more than sure it’s probably going to center on the fact that the “time displaced” Bobby Drake came out as being gay in All New X-Men #40… which will have the “616” Bobby Drake probably questioning his own sexuality (since the time displaced one is supposed to be the same exact Bobby Drake from the past… Don’t worry, if you have a headache trying to understand this, you’re not alone). I can’t imagine the entire series will be spun around his sexuality (though, no doubt will be the “hook” to the book to capture the extended audience), although reading the interviews I’ve seen with Sina Grace – it does seem like this is pretty much going to be a book about Bobby discovering himself…  She did mention the fact that Bobby is an Omega Level Mutant would be explored… (to what context, I have no idea, since she made no mention of villains or anything during any of the interviews I’ve read). If it’s going to be a touchy feely book with no fights tossed in there for good measure (I mean, does Iceman even have a rogue’s gallery?), this will no doubt be a book that I personally skip. 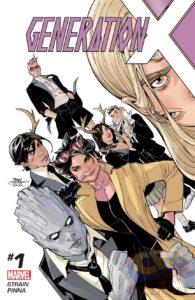 The book will center on young mutants who don’t really fit in the reopened Xavier Institute, pretty much being led by Jubilee (is she still a vampire? With a kid strapped to her back? Or is that being tossed out the window? Or was it resolved? I don’t even know anymore, because mutant books and characters have been such a train wreck these last many years!) So anyway, the new school is broken up into three segments: Next Generation of X-Men, which is those mutants who are being trained and fit for the role of potentially becoming X-Men; Next Generation Ambassadors, which is those mutants who are sent to speak on behalf of the mutants; and finally, the… Next Generation Of…? Well, there’s mutants who just aren’t fit for battle, and have mutant abilities that may be physically uncomfortable for humans to see… and that’s what Generation X is about. So Jubilee will be leading them, and on the team will be Quentin Quire (well, at least the writer knows how to pick out the useless mutants), Eye-Boy (who has an eye on his tongue…? That is his mutant power? Isn’t that just a deformity?), Benjamin Deeds (I don’t even know who this is?), Nature Girl (Really? Really?), Bling! (I can’t even make this up… I mean, I could, but I’d need to reduce my intelligence to near non-existent), and Nathaniel Carver (who is newly created, and the writer admits; is half Korean, because she is also half Korean, and said that she wouldn’t be doing her or Greg Pak any justice if she didn’t – and I quote – “create a hapa hero”), who has the ability to see someone’s past via touch (which is just like Longshot, and several others who have already existed). I think it’s pretty clear, this will be an easy pass for me. 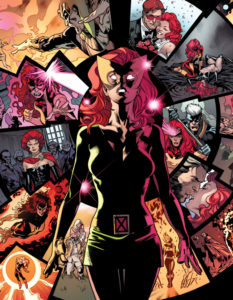 My main problem with this? Even before it’s launched? How long until she gets the Phoenix Force? How long before she gets it, then “dies” and comes back a hundred times, becoming the same joke that the original Jean Grey eventually became? This Jean Grey comic will focus on the time displaced Jean Grey, who knows what happens to the original Jean Grey, and all the things she’s done. My other problem is, long before Jean Grey (the original) became the joke that she became with her dying and coming back so much; she was one of my favorite all time female characters; especially during the Hellfire Club story that eventually led to the Dark Phoenix story. And I’m afraid that the book is going to try to “recapture” that type of Jean with this young, time, displaced Jean… and I don’t know. Hopeless is even quoted as saying, “… given that Grey is preparing for the return of the Phoenix Force to Earth, other previous and storyline-futre hosts of that cosmic entity could also factor into this ongoing title…” I am just entirely too skeptical, and my dislike of these time displaced versions of the original X-Men make me even less inclined. Another worrying fact is, that Hopeless was quoted as saying, “The first thing I re-read was Brain Michael Bendis’ All New X-Men, because Teen Jean was born there.” I’m sorry. What? If these time displaced X-Men are indeed versions of the original X-Men, then Teen Jean was not born there – so was born in the X-Men book when it originally came out. That’s almost … insulting. 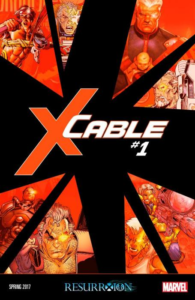 I don’t believe the details for the Cable series have been released yet, so that should be coming up soon…

1 Response to A Look at ResurreXion