Another time coloring; did this one in just under two hours. Just trying to get faster and doing things and not over think things. Didn’t turn out too bad, considering the original B&W image I had to work off of.

Turned into this with some brain relaxing digital coloring…

Some time late 2013 (after October) or early 2014, DC Comics was relocated from New York, New York (where it’d been since it’s inception back in 1930) and moved to Burbank, California, to be closer to the parent company, Warner Bros. This, when announced, apparently wasn’t a big surprise to many who worked at DC – it seemed there’d be some rumblings before the official announcement made by DC Entertainment president, Diane Nelson. In 2018, she would eventually resign.

So as employees of DC Comics, who’d lived in New York; some of which packed up and relocated to the other side of the coast for work – life was a drastic change (going from New York to California, is like being in a hot shower and then jumping into a cold pool – in that life and the way things move and work, can be drastically different).

Now, here we are in 2020 – the year of Covid-19 and everything else horrible; and as if that wasn’t bad enough, with everyone struggling – Warner Bros had to make a business decision that would, naturally, impact personal lives. Warner Bros has done “some reorganizing” and by doing so, laid off over 600 people.

Surprisingly, at least to me – because he’s a name I’ve always known in comics – Bob Harras was one of those who was “let go” due to the reorganization. At DC, Bob Harras was Editor in Chief. Another big name I saw, impacted was Bobbie Chase. Not impacted, was Jim Lee, who remains CCO at this time. From what I’ve gathered, they’re saying one third of DC’s editorial ranks are being laid off.

It’s a terrible time to be laid off right now; finding a new job in this current, Covid-19 world is next to impossible, as most businesses are on pause; waiting to see when and if this Covid-19 thing comes to an end. My thoughts are with those who have lost their jobs. As someone who has been laid off before, with a company shutting down, I am hoping these people can somehow land on their feet.

Sending them all, much love.

Posted in Uncategorized | Leave a comment
Posted on August 10, 2020 by Comic Relief Podcast

Didn’t care for how this one turned out, but whatever. Keep learning. #UncannyXMen #XMen #Wolverine #Rogue #Storm #UncannyXMen158 #UXM158

Using the light/dark trick is much, much, much more difficult on Marvel black and white images, because the artist tends to overly shade everything – making it a very cluttered picture to try and do the light/dark trick. But I think – while on Wolverine, it was messy – it actually looks nice in the Brood/Sleazoids and the background.

And this is where I would have normally stopped.

I thought this one would be easy; but Petalwing’s webbing proved difficult. This could use a lot of touching up (fine tuning the coloring of the leaves, and really a lot less “coloring out of the lines”) – but this time, I timed myself to give me just two hours to see what I could produce. It ain’t so bad.

I owe Vaeri over on the Father Tree Holt, for turning me on to understanding using the Dark/Light shading. Before, I’d just color black and white images with one base color; she showed me how to use the light/dark tool to really give an image a 3D life. I’m still learning (she’s incredible at it). But I feel like it’s really helped.

Here’s a black and white ElfQuest image I colored.

And my color version:

I clearly got a ways to go; there’s some stuff I could improve on (obviously), but I am proud of how her tips helped bring this image to life.

Edit: Wasn’t happy with how light it was, so I touched it up, darkened it, brightened up some of the colors, and am much happier now.

So if you follow us on Facebook, Twitter, and Instagram, you know I’ve been re-reading West Coast Avengers. These days, I’ve not really enjoyed the newer comic book market – let’s be real, it’s been like that for years, with a few exceptions. I understand that the market has changed, and if anything, through Twitter, the new generation of comic book readers are wildly enjoying what’s coming out – and that’s all that really matters.

But in the meantime, I have thousands of comics that I could go back and re-read, because it’s been forever.

I’ve been recently re-reading West Coast Avengers and not at all surprised that it has managed to hold up all these years.

If you’re looking for issues of West Coast Avengers (or any comics), we have an Affliate link with MyComicShop’s website that tosses a few coins to your Witcher (that’s me) for every purchase. It’s not much, but it helps.

Note, if you click either of those links and just continue to surf other comics, and still purchase while you clicked the link, it sets a cookie that still grants us the benefit. So for example you click one of those links, but then search the site, look up Uncanny X-Men and buy issues; as long as you didn’t close the browser (or click someone else’s affiliate link), it should still register for us.

I am absolutely addicted to the art Twitter user, BeefCakeBoss2 has been kicking out. Here’s just a sample of some of them – so I would strongly suggest giving him a follow, and he does these as commission art now, after being released from his job (Covid strikes again). So if you’re looking for a hero or villain that he’s not done yet; or maybe he’s done one but you want something different – hit him up.

I’ve even used Adam-X, Dazzler, and Gambit for the banner on the Facebook, Twitter, and Instagram page (to represent each of our favorite characters as us) –

Here’s an example of some he’s done.

It’s time to fight your friends!

Hold up; before you go delivering an unexpected body blow to your good friend – let’s read what I mean first, right?

Well, the folks at Cold War, Inc. have released a game called Fight Your Friends. (Available Now!) Don’t worry parents, this isn’t one of those crazy, harmful, internet trends you hear about – but it could be – with any luck – a fun, trendy game to safely play! So let’s talk about Fight Your Friends.

The game comes with 60 unique characters – with the idea that these characters meet at Carnaval de la Lune, a nexus for all realities that meet and converge here to create an arena where the best group comes here in hopes of winning the tournament!

The game is broken down by stats – represented at the top of the card as Attack, Magic, and Defense. As two people flip their cards over; who ever has the card that wins by the most points, wins that round (so for example, if Player 1 has 1 attack higher, and 1 Defense higher; but player 2 only beats their Magic by 1; then Player 1 has a total of 2 points, so player one wins the round).

Aside from greatly detailed character portraits, on the “ticket” piece of the bottom; you find the character’s name, their gold value, their “special action”, and then on the right; three icons – the first (the tapestry) represents the character’s Order (Red = Society, Purple = Tribe, Blue = The Network), Class (Red = Warrior, Purple = Witch, Blue = Rogue) and Type (Red = Natural, Purple = Supernatural, Blue = Enhanced). So by looking at Tazy Crazy above, you can see she belongs to The Tribe Order, The Witch Class, and the Supernatural Type. But are all Order, Class and Type the same color? Not at all. Let’s take a look at another, shall we?

You can see Anne Bonny comes from the Society Order, Rogue Class, and Type is Natural.

So how does this work? You essentially pick your ten Friends (or crew) from the deck (no duplicates allowed!) of cards with a combined gold value of 30 or less. You play against another person – you look at your deck and see who you want to be the first contender from your deck and each of you lay down your first card, face down. Then, when you’re both ready – you flip over the card – whoever has the better over all score of stats (compared to the other) wins. So let’s take Anne vs Tazy as an example.

First we compare their Attack – Anne has a 6 with Tazy having a 4. So Anne wins by 2 points in regards to the attack. So next we look at Magic. Well, Anne has 0 here, but Tazy has 4, so Tazy wins by 4 here. Then we look at Defense, Anne has 1, while Tazy has 4, so Tazy wins by 3 here. Now, in the total scheme of things; it doesn’t matter how much over you are better than the other card. So for example, Anne has 2 points better in Attack; but this is still only 1 point for Anne. Tazy had 4 points in Magic more, and 3 points more in Defense; but these boil down to 1 point victories in each slot. So Anne won 1 slot, Tazy won 2. Tazy is the victor.

Round two, Tazy gets to remain standing; as well as putting down a second card from their deck! (Now Tazy would have a friend at her side!)

Whoever put down Anne, now has to put down their second card (while Anne is considered knocked out), now has to compare against Tazy’s player’s second card – hope to win that round, and then has to face of against the Tazy card as well. And the battle continues. This goes on for four rounds. As I said, keep an eye on those special powers; because in some cases, special powers may chain react for a better result!

At the end, count up the gold from your perspective winning piles and see who has the most gold!

The game is quick and easy to learn! It’s a great price! Especially for such magnificent art, and the potential replay-ability of the game by mixing your characters up and seeing what combos may potentially work best for you!

I want to thank Alex Fisher of Cold War for giving me the opportunity to play and enjoy this game! 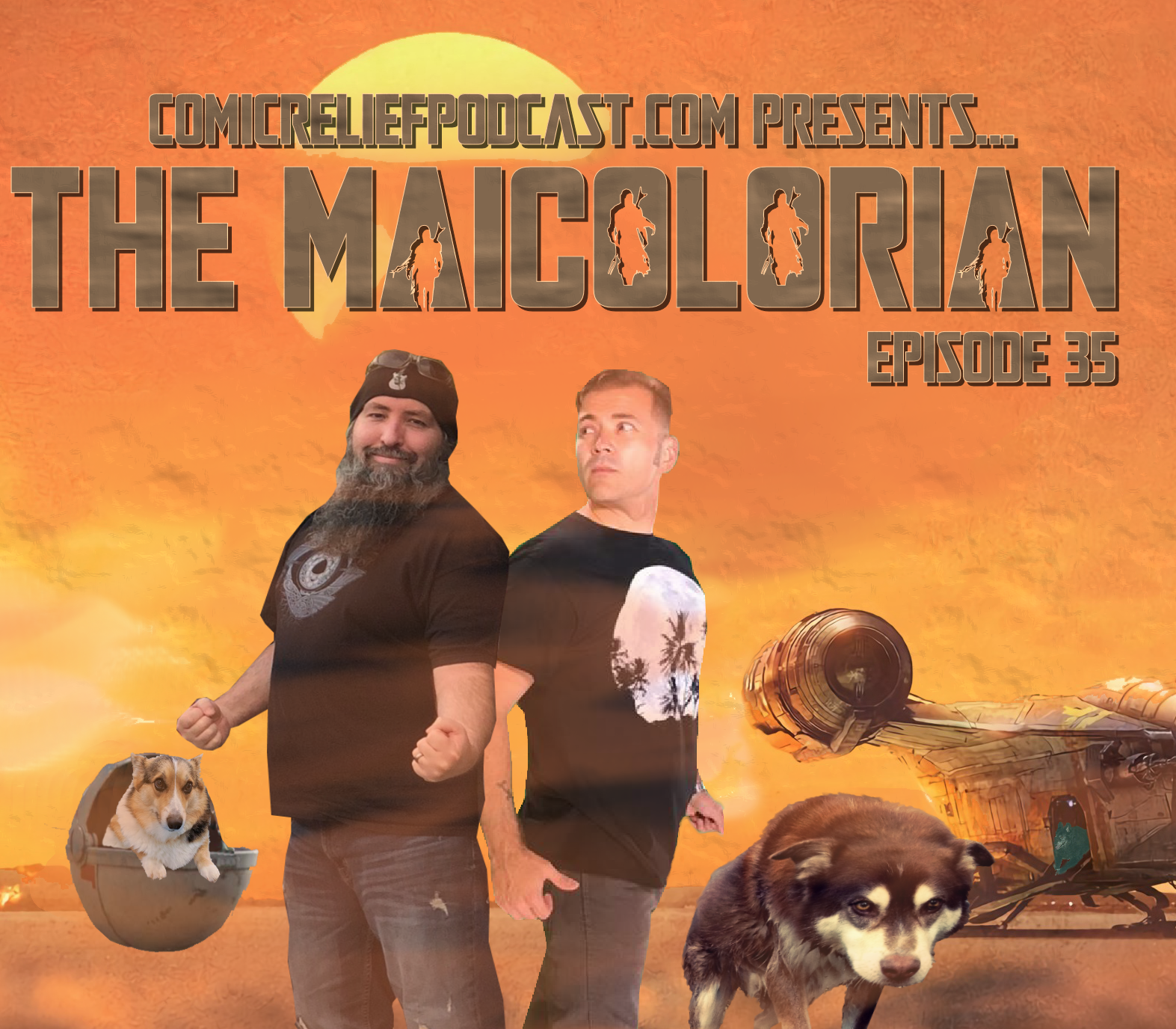 Maico Moreno returns to The Comic Relief Podcast – as we discuss The Mandalorian on Disney+. Maico also opens up as to why he’d been absent and his health that kept him from being a part of the podcast for all the episodes over the last two years.

It felt great to have Maico back on the podcast and feeling that chemistry once again between he and I. (And I mean that in a heterosexual way, I swear!) Amiee will continue to also be a co-host also, with it being myself, Amiee and Maico, or just myself and Amiee, or myself and Maico! The podcast that’s all about threesomes! Wait – that’s not what I meant!

Listen – why don’t we just get to it?

If you want, you can download the episode if you want. It should appear on iTunes shortly also.

NEW! Like the image? Want to decorate your desktop and just stare at the awesome? Download the wallpaper!