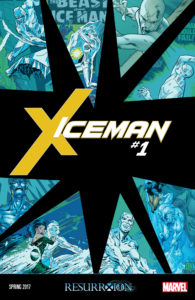 So, after quite some time of speculating Marvel was doing away with mutants in favor of Inhumans, because of the movie rights between Fox and Marvel/Disney – it looks like they’re unleashing some new mutant titles. One of the titles announced was Iceman. Iceman has been a “fan favorite” for quite some time. His “sexuality” has come into question by rabid fans who claim that Bobby is gay, and in the closet. With Marvel’s recent kick to “diversify every single Marvel character” – could this series focus on Bobby trying to discover who he is sexually?

More importantly, will a “fan base of Iceman fans” be enough to carry a book before it gets cancelled by the sixth issue? I certainly have my doubts about this book lasting very long because of a lack of sales. It almost seemed doomed to fail. 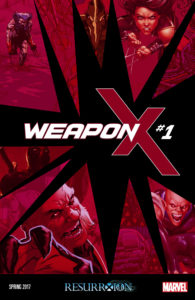 Another book that has so far been announced Weapon X. This book was pretty dark when the previous series came out; all the references on the cover are references to the existing series. I wonder if it will be about Canada’s Weapon X program, or if we’re getting a new character who is going to adopt the “Weapon X” name (say, for example, a resurrected Logan? Or will X-23 take that name… when say, a resurrected Logan returns?) Do you see where I am going with this? I think Logan’s been dead long enough, that somehow, we’re going to see him return.

One can hope (that one, at least, being me), that all these time alternate versions (the “young, Original X-Men”, “Old Man Logan”, etc) all return to their time lines, and Marvel gets it together and streamlines these characters to avoid any confusion. But… that’s probably not the case, since (young) Scott Summers is a part of the upcoming series, Champions.

Have you got some book titles/characters you hope get their own ResurreXion title? Let us know on Facebook and Twitter!