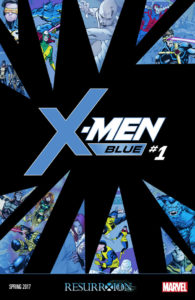 I’m torn. Literally, torn. After releasing hype about the X-Men would be “returning” to the Marvel Universe, and they teased an X-Men: Blue and X-Men: Gold team, much like the days of the 90’s when the X-Men were frequently broken up into both teams. There was a lot of mystery as to who would be on which team, and who would be the creative team behind each book.

So let’s begin with X-Men: Blue. The team will essentially consist of the “Original X-Men” – but their teen versions that were brought into the “616” Marvel Universe (or whatever the main continuity is called, since the events of the most recent Secret Wars) from the All New X-Men title several years ago. 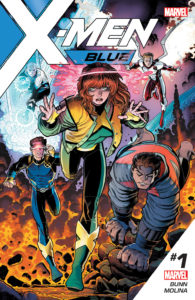 I have hated the All New X-Men concept from the start; well, let me be more clear. I thought the idea of yanking the original X-Men into the present time to show them what they had become was an interesting idea. I thought this would have ramifications on the current X-Men. But instead, what they did was keep these teenage X-Men in the present. Time paradoxes aside (since this is supposed to be the very same X-Men in the current time line, and not an alternate reality) – the consequences of what these X-Men should dramatically impact everything the current X-Men are doing. But that wasn’t the case. So what we have now is the regular Angel, Beast, Jean, Scott and Iceman as well as the teenage versions of them running around in the same universe. Got a headache yet? I had hoped – perhaps believed that All New X-Men would be a reset for the current X-Men. That their teenage selves would see what they’ve become and suddenly the current original X-Men “reset” because of the changes that their teen versions make in the past. That would have been an interesting read. Not having both of them running around in the same universe.

Someone might ask, “Why get so bent out of shape? It’s comics!” Well, the X-Men were something I have always been passionate about (we’re talking the 4th grade, and without going into too much detail – let me tell you, that was a long time ago). So the X-Men are my passion; the way some people love race cars, some people love football teams, and all of that other stuff.

Now… all of that said… the reason I am torn is because Cullen Bunn is writing the X-Men: Blue book… and let me tell you, Cullen Bunn has never done me wrong when it comes to writing fantastic stories. He’s made me care about characters I’ve known little about (Sinestro, for example) and restored my faith in Uncanny X-Men recently, when I had felt that all hope was lost. So if there’s anyone who can make me care about these time displaced teenage mutants, it’s going to be Cullen Bunn. Art will be by Jorge Molina. 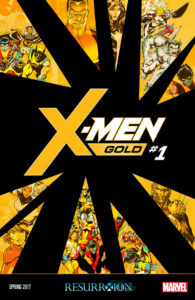 The X-Men: Gold team roster looks to be more up my alley of what I would expect to see in a X-Men book. Marc Guggenheim will be the writer on that book (and I recognize his name from Young X-Men (so there’s a weird sense of irony that he isn’t writing X-Men: Blue since the team is composed of the young versions of the original X-Men). Art will be by Ardian Syaf.

The cast of X-Men: Gold will be: Old Man Logan, Nightcrawler, Colossus, Storm, Kitty Pryde, and Rachel Summers (as a new name Prestige). 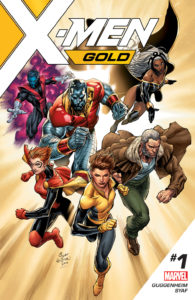 That is a line up that seems more in line with what I’d expect to see in an X-Men book. I was almost certain that “ResurreXion” was hailing the return of the original Wolverine to come back from his (apparent) death.

Both of these books will feature female leaders; X-Men Blue will have Jean Grey as the team leader for the first time, while X-Men Gold will feature Kitty Pryde as the leader of the X-Men.

This cast leaves in question where several other “active” X-Men will end up. Where is Emma? Where is Magik? Where is M? Could they be heading to the ResurreXion title Generation X? That’s my speculation. But there’s others that were popular in the 90’s, that are currently active and in neither book – and don’t seem like a good fit for Generation X, for example Psylocke. She’s currently pretty busy in Uncanny X-Men. And where will all of this put Sabretooth, who is also pretty busy in Uncanny X-Men?

Both of these books will begin releasing in April 2017, and ship twice per month. (Remember when the X-Men did that a long time ago?)

X-Men Gold writer, Guggenheim, is best known for his work on The CW’s Arrow and Legends of Tomorrow, while Syaf worked on The New 52 Batgirl series with writer Gail Simone (and if you have listened to our podcast, you know how much I loved Gail Simone & Syaf’s Batgirl, so this makes me very excited!) Guggenheim has teased that one of the first threats the X-Men: Gold will face is a team of Brotherhood of Evil Mutants that should surprise readers.

For X-Men Blue, with Professor Xavier (still?) dead, the team will be “mentored” by none other than the greatest enemy they knew – Magneto. Bunn also promises that the concept that these time displaced X-Men are potentially causing massive, damaging ripples in the time line. Bunn would not reveal who the X-Men Blue will face off; but he hinted it’s one of the best “villain duos ever.” (If I were to make a guess, given the X-Men history, I am going to say it’s Black Tom Cassidy and Juggernaut).

Now the question is – Where is Rogue? Where is Gambit?