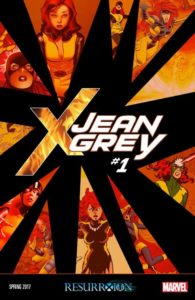 Two more titles have been announced. One of them is Jean Grey. This isn’t remotely surprising. Jean Grey has always had a pretty big following (though, for me, the height of her character was during the original Phoenix/Dark Phoenix era, and then again, when they brought her back for the original X-Factor run… somewhere after that, Jean Grey became a train wreck, for me…) But, it looks like Marvel wants to give another crack at giving the readers the most popular and well loved female mutant, Jean Grey. The question comes along; will it be the (time displaced, young) Jean Grey or will it be the regular Marvel Universe Jean Grey? To be honest, I don’t know where either of these characters stand currently in the Marvel Universe. 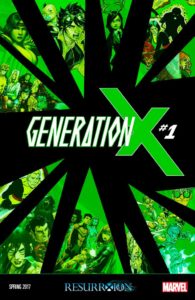 Another book they announced was Generation X. I remember enjoying this book when it first came out, but it eventually got a little strange in their story telling. But I always enjoyed the characters. However, I doubt that this will feature most of the original members of Generation X, because most of them have been killed. Let’s take a look at the original roster: 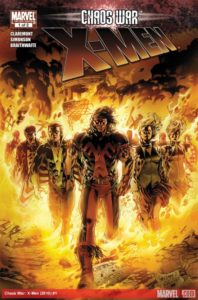 Banshee – Died, trying to prevent two airplanes from colliding into one another, if I remember correctly. To my knowledge, he’s not been since. I do believe he was in X-Men: Chaos War, as one of the dead mutants seen along with Thunderbird (who, also, ironically died, trying to stop an airplane). He was also resurrected as Death during an Apocalypse storyline, but I don’t recall if he was ever put to rest again, or still running around as Death. 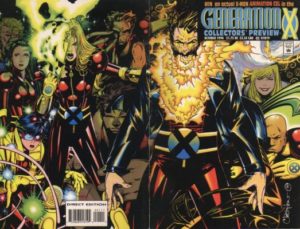 Chamber – Alive. He lost his powers when Scarlet Witch did her “No More Mutants” thing, and became a member of the “X-Men New Warriors” as I affectionately call them, using tech to emulate powers. He has since then, regained his powers after the event of Age of X, so that means Chamber could appear in this book.

Emma Frost – I believe she’s running around in one of the few remaining X-Books currently being published by Marvel. I can’t see anyone taking her off a major X-Book to put her on Generation X. But I could be wrong.

Husk – Husk flirted around with Angel for quite some time, before eventually becoming a part of Jean Grey’s School of Higher Learning, where she eventually left the school. I don’t know if she’s appeared since, so I am guessing she’s still alive.

Jubilee – Jubilee went from being Wolverine’s side kick, to becoming a member of the the X-Men, to eventually losing her powers, to joining the “X-Men New Warriors” (along side of Chamber), to then becoming a vampire… Jubilee has been a trainwreck, and lost her fun spirit that she once had… But, she’s alive… and could make an interesting addition to a Generation X book. 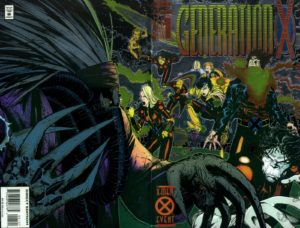 M – She is currently a member of Uncanny X-Men and getting a lot of air time there, and has a major story going on there (where she has accepted Emplate, who is now merged with her). I can’t see her leaving the Uncanny X-Men book, because it definitely seems like Bunn has big plans for her.

Mondo – The original Mondo that was on the team was a clone (sigh), and they eventually met and fought the original Mondo (after the clone had been killed by Bastion). The real Mondo was shown to still be alive and powered, as he was a part of Cyclop’s march in Washington, DC. 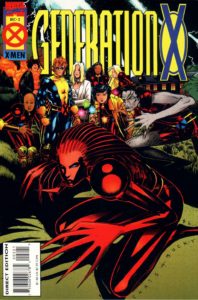 Penance – She has one of the messiest origins in Marvel history (I loved her character, before they tried to explain who she was and then retcon every attempt to explain it), but she was definitely seen alive, and still powered, in the pages of Avengers Academy.

Skin – Skin was one of the mutants killed by the Church of Humanity. His body was cremated and then later (somehow) resurrected as a part of Selene’s transmode virus army. I have no idea what came of that.

Synch – Was killed in an explosion, saving kids, and like Skin, was resurrected by Selene for the transmode army to attack Utopia. Not sure what ever came of that, after the attack, if they returned to death.

UPDATE: DurararaFTW on the CBR Community informed me:
Emma Frost is not in any X-Men on going. She has a part in the mini-series Death of X, that’s all. Banshee is alive, last seen in custody with the Avengers. I’d read Hellcat before judging that Jubilee has lost her fun spirit.