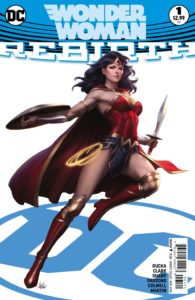 Wonder Woman rebirth is a reintroduction of sorts of Diana Prince. We get dropped off with Diana on a successful rescue mission of a young lady at a strip club. But something feels off. She feels like her memories are failing her, like she’s forgetting something. Reality seems false. Something seems wrong. Wonder Woman does something that I’ve never seen her do before, which I think is pretty cool; she turns the lasso of truth on herself and discovers a deceit buried deep within her consciousness. After this moment of clarity, she sheds her New 52/God of War armor and dons her classic Wonder Woman outfit in search of answers. This book was my favorite of the first Rebirth issues. It blends an original story into the larger picture of the Rebirth event. I highly recommend picking this one up. 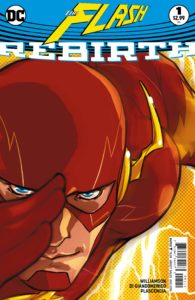 WARNING: Do NOT read this issue until after you read DC UNIVERSE: REBIRTH #1

The Flash rebirth picks up almost directly from his story in DC Universe: Rebirth #1. The flash is working a case that hits a bit too close to home. The homicide a woman murdered in her own home with the primary suspect being the father. The flash has to put his own personal experiences aside to solve the case. During his investigation he begins to have visions…he sees a speedster calling out to him from within the speed force.

Just like Flashpoint, The Flash is a major anchoring character in the rebirth event. His book will be one that holds many of the key elements moving away from the New 52 and into the Rebirth. I highly recommend that you stay glued to this series. 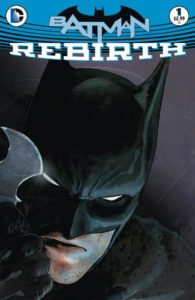 Scott Snyder couldn’t screw up a Batman book if he tried. Batman: Rebirth is no exception. The calendar man is up to no good, changing Gotham city’s seasons by the day. Monday is Spring, Tuesday is Summer, Wednesday is Fall and so on. In classic Batman fashion, this story has little to do with the overall Rebirth storyline. After all, Batman doesn’t need the DC universe, the DC universe needs batman. When it comes time for Batman to be called upon, I am sure he and his Bat family will jump into the fray and help out the Justice League save the world from imminent doom. Until then, Calendar man!