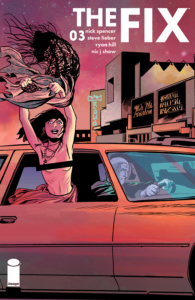 Caution, this book is for mature readers. This review is not though 😉

Have you ever found yourself rooting for the bad guy? Have you ever felt like the bad guy was way cooler than the good guy? Did you ever wish that the story followed the villain instead of the hero? Then this book is for you. The Fix is a fun crime noir that follows a couple of crooked cops through the seedy underbelly of Los Angeles. They rob, scheme, double cross and break the law as much as they drink – and they love every second of it. This book is funny, brutal, shocking and can get a little too real at times. If you’re into bad guys doing bad things for selfish reasons, then this book is for you.

The story is fast paced and quick witted. Nick Spencer masterfully dispenses both subtle and in your face humor. He likes to paint his characters into corners and make them squirm their way out of terrible situations. You can’t help but not feel bad for these characters because ultimately, the situations that they find themselves in are of their own doing.

I’ll just come out and say it, I am a huge fan of Steven Lieber. This is the perfect book for his cartoony art style. The art of this book reflects the writing perfectly. A layer of cartoony art and behavior that almost makes you ignore the brutal goriness of the actual events transpiring. Perfection.

Did I forget to mention that this is the same creative team that brought us The Superior Foes of Spider-Man?  Yeah. Go pick this book up now. 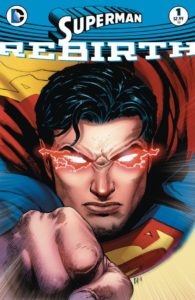 The Superman of the New 52 is dead and the Pre New 52 Superman wants his body. Having once died at the hands of Doomsday, he knows from experience that his doppleganger stands a shot at revival. With the help of Lana Lang, Superman recovers Superman’s body only to discover that the means to bring Superman back to life are not available on the post convergence earth. New 52 Superman may actually remain dead. The audience cheers.

Mahnke’s pencils border on being too sketchy for me. The lines and shading feel a bit busy at times. To be fair, some pages are better than others. Also, little things bother me, like characters not making eye contact when face to face in battle or characters not falling in the correct direction that they are being punched in. Little things. Not terrible, but not as tight as I would expect from a Flagship DC character.

This is a major part of DC’s apology to fans as mentioned in my DC Universe Rebirth review. The New 52 Superman was unnecessarily dark and brooding. He was similar to Zack Snyder’s Man of Steel and just like that version, did not sit well with fans. Fans missed the classic Superman of the days prior to Flashpoint.  Jim Lee and Co are trying to right the flagship title and restore it to it’s former glory. We’ll have to see what they do with this Superman. Hopefully DC returns Superman his roots; Truth, Justice and the American way. 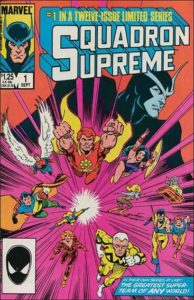 At first glance Squadron Supreme is a counterfeit Justice League book. A blatant ripoff attempt by Marvel. Sure the costumes and names are different, heck even their powers only show slight variations to the Justice League.  Let’s be real here, mirroring characters between the two big publishers is nothing new. We wouldn’t have Marvel’s Deadpool without Deathstroke, Thanos without Darkseid or Aquaman without Namor. The Squadron Supreme fit perfectly into this category. They are unapologetically a Marvel version of the Justice League. Writer, Mark Gruenwald even includes many tongue in cheek references to the DC heroes throughout the book.

But that is where the parody ends. What isn’t fake is the quality of this story. Well into the first issue, Gruenwald makes the reader forget the forgery. He makes these characters his own. They are unique and interesting heroes with personal struggles and beliefs. Gruenwald tortures them, teases hope then takes it away.  By the end of this 12 issue series, the reader yearns for more. After the final issue,  I wanted to learn what happened to the surviving characters.  This is a true testament to Mark Gruenwald’s masterful writing skills.

“The road to hell is paved with good intentions.”

The Squadron Supreme’s earth (Earth-712) is in a post-apocalyptic state, put there by the once mind-controlled Squadron Supreme themselves. The story begins with the team reeling from a near defeat at the hands of the villain, Over-Mind. Seeing the catastrophe and disorder left by their own hands, Hyperion (The Team Leader) decides that the only option is for the team to harness their great powers to rebuild earth into a Utopia for humanity.

They do this by first publicly revealing their secret identities and assuming control of the US Government. They then ban firearms, institute forced behavior modification for criminals, and develop a method to cryogenically freeze the dead until a cure for death can be found.  Not all of the members agree with this utopian plan causing a major rift within the team. Battles lines are drawn, adversaries become allies, friendships are ruined, and lives are lost.

A guilty pleasure of mine is when a writer puts his characters through hell. Physically, mentally and emotionally. Mark Gruenwald does just that. This book has no winners, no happy endings – only consequences.

The art of Squadron Supreme epitomizes 80’s comic book art. I would hazard to say that Bob Hall’s pencils and Christie Scheele’s colors could stand head to toe with any other flagship title published around this time from either publisher. The art is consistently clean, vibrant and bright throughout the entire run with great attention grabbing covers.  There are a few discrepancies that are common in this era of comic art, for example, small panels where the colorist colors a portion of a costume with skin tone or vice versa. Minor discrepancies that don’t take away from the overall experience. It does take away from a perfect score though.

What should have been a simple throwaway parody comic is a surprisingly well written, deep story with huge moral undertones and permanent consequences. Squadron Supreme has action, drama, suspense, betrayal and romance. All done very well.  Mark Gruenwald spins an almost perfect story about a superhero team’s ambitious attempt to protect the planet by any means necessary and overreaching with their power.