I am still trying to piece together, exactly what Marvel Comics is doing. So right now, there’s Civil War II, which is far from over – as a matter of fact, it’s hardly just begun and Marvel is already teasing a Divided We Stand – which apparently won’t be an “event” in the traditional sense of a cross over or anything; but it’s going to be the “new Marvel Status Quo.”

The image isn’t a Left Side vs Right Side. Rather, those pictured above will be the next set of characters that will be significant in the upcoming Marvel Universe. Alex Alanso, Marvel’s Editor in Chief said, “It’s a glimpse as to whom we can point to in the coming year, with just enough ‘What the heck’s going on there’ spots to get people speculating…. There’s no Tony Stark in that picture, but who’s that guy holding the helmet? Is that Doctor Doom?… The young girl in the gray armor looks a lot like the new War Machine…”

It’s funny, because I didn’t have those thoughts. I saw that image, and immediately sighed. It does look like an opposing sides photo. And if these are going to be the significant characters – I applaud going away from the “big characters only” – but the majority of those characters in the above photo I care absolutely nothing about. 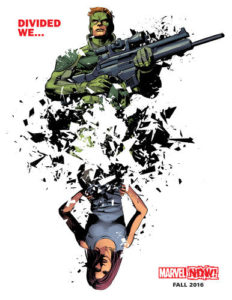 I mean, I understand why some of them are being put front and center. Jessica Jones for example has a successful Netflix series, and the next season is due out by next year. So it makes sense to put her out there. I remember Solo from the pages of Spider-Man, but I can’t imagine why he’s being pushed out there as a big character for the upcoming year; other than my own speculation that he might be appearing in the upcoming Punisher Netflix series. (Seems like the two of them would make pretty equal enemies, and given Punisher a recognizable equal to fight throughout the series). But again, that’s just speculation. Regardless, I think it’s cool to see Solo getting some love. Not sure why, but I have always liked the character (though, looking at him now, with some color changes, he does bare a resemblance to Spartan of WildCATS – not sure who came first, but that just dawned on me). Or it could be simply because Solo is going to be in the Deadpool book, which leads me to… 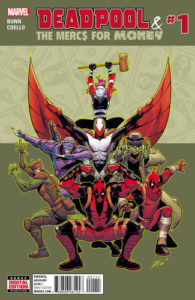 I see Slapstick in there. I know he’s headed (and currently is in?) the pages of Deadpool. So I am sure whatever he’s going to do to highlight him will happen in the pages of that book, probably along side of Gwenpool (Really Marvel? I mean, seriously. Really? Is it no wonder there’s so few Marvel books I pick up. Gwenpool. As if Spider-Gwen wasn’t already bad enough). Now before any ladies get upset and think I am some misogynistic male comic book reader – you couldn’t be further from the truth. My favorite character from Alpha Flight? Snowbird. My favorite character from The New Warriors? Namorita. Favorite character from The Defenders? Valkyrie. One of my favorite books from the New 52 was…? Batgirl. (Back when Gail Simone was writing it, and before we got the “Selfie!” Batgirl that I loathe). I actually really love strong, well written female characters. But I also enjoy the more serious comic book stories. Well, not serious, but I am not a fan of the offbeat comic book stories. So for example, shoot me now – I am not a fan of the Deadpool comics. I didn’t like Slapstick. I do enjoy the “not so over the top” funny characters, such as Speedball from The New Warriors. The only way off the beaten path, over the top crazy character I enjoyed was Madcap – and that was pretty much restricted to his appearances in Captain America. (I understand that he’s also appeared in the Deadpool comics, but I couldn’t bring myself to pick it up). 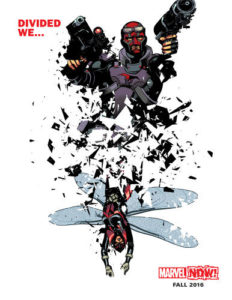 Moving on, there’s apparently a new Fool Killer in town; and he looks really weird. Now, granted, the original Fool Killer (there’s been a few) didn’t have the best costume either; but this Fool Killer, I don’t know. I can’t get behind that costumes. At least Wasp looks normal, and hopefully, whatever she does, she’s restored to the great strong, female lead that she used to be. But honestly, my faith in what Marvel can produce currently, in terms of comics, is not all that high. So I fear for whatever comes of the Wasp, it won’t do her the justice she deserves. (She’s probably getting spotlight time to try and align itself and make her relevant again, in time for the Ant-Man & Wasp movie). 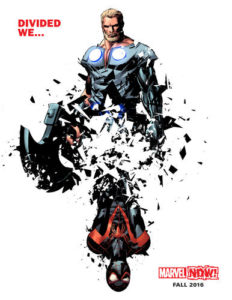 The recent news has already revealed that, apparently Miles Morales may be cast in the upcoming Spider-Man: Homecoming – so I can see why he’s being put up front. And it looks like on the opposite side of that is the (male/original) Thor, who is no longer the Thunder God. (Sad that I was an avid fan of Thor, but after trying to make it through Jason Aaron’s run, I finally gave up and have absolutely no idea what’s happening in the life of Thor; but at least I have several hundred back issues to read, whenever I need to get a Thor fix). I tried collecting when Jane Foster took over as Thor, but I didn’t find the story all that captivating and dropped the title about four issues in. There’s also Thor 3 being worked on in the movies; so again, I can see why they’re trying to make Thor significant again. 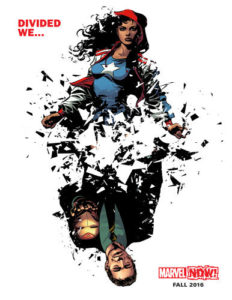 Moving down the line we have Miss America and Doctor Doom. I am at a loss here. Who is Miss America? And it looks like Doctor Doom might take over the Iron Man armor – kind of like how Doctor Octopus took over Spider-Man to make the Superior Spider-Man. This is just speculation, naturally. (And for me, uninteresting). I think Marvel realizes that, while Fantastic Four can’t seem to sell books (or make a good movie), there is no denying that their main villain Doctor Doom is definitely an iconic villain – so they need to make use of him, even if they can’t save the rest of the Fantastic Four franchise. I am not entirely surprised by the creation of Miss America – I don’t know her story (and I seriously doubt she has the Super Soldier serum in her) – but it certainly not surprising at all that Marvel would make a female counter part to Captain America by the looks of things; and to even place the “Race” card by making her (I am guessing, Mexican, with a last name like Chavez?) Seems to almost be countering Trump’s “we will build a wall” motto, by having a (female) Mexican character representing America. 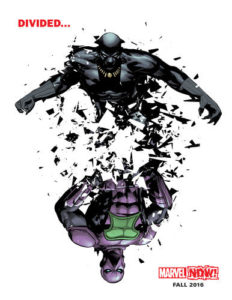 Next we have Black Panther and, of all the characters, Prowler. Prowler, much like Solo, I remember from the pages of Spider-Man. I am not sure what their plan is with him; other than perhaps he’s one of the villains in the upcoming Spider-Man: Homecoming movie? As for Black Panther, to be fair, they have been trying to push Black Panther forward for quite some time; even having him marry Ororo Monroe (Storm) of the Uncanny X-Men. No surprise he’s getting thrust forward into the limelight, with his own solo movie coming out (and after all the positive reactions) he got from his appearance in the Captain America: Civil War movie. 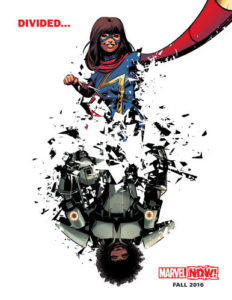 Fear not true believer, there’s more to come, because up next we have Ms. Marvel and – what some are speculating – is the new War Machine. Ms. Marvel to me, was another attempt at Marvel going for the “we’re so ethnically diverse” card. Read about her, and you will perhaps not agree with me; but probably see why I say that. As for the other character, I have absolutely no idea who she is (in regards to if she’s supposed to be some existing character). But it certainly looks like that she might be in some modified armor, that could potentially have her in the War Machine moniker. And again, would not be the least surprising to take the male character out – and they did just that by killing War Machine (in a rather pointless way) during the beginning of Civil War II. For a comic company seeking to be so ethnically diverse; this is twice now that they have killed an African American character during the events of Civil War (in the first one; Bill Foster/Black Goliath was killed; and now Jim Rhodes/War Machine). Oh, Marvel, if I could only figure out what you were doing… or better yet, if you could figure out what you’re doing… 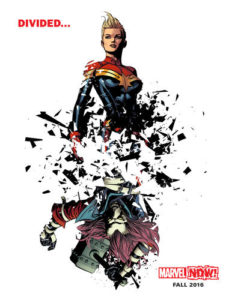 Next on the discussion block, we have Captain Marvel and Slapstick. Now I have always been a pretty big fan of Carol Danvers; from her days as Ms. Marvel on the Avengers & her solo series, to the days she was using the name Binary (probably my favorite version of her), throughout most of her solo books; her latest book however, I am not picking up. Which is… rather surprising. Because several members of Alpha Flight (a favorite of mine!) are present in this book: Puck, Sasquatch and Aurora! Normally, I would pick up the book; but with what comics cost these days, and the cost of living in California; I need to be picky about what I pick up and not get something solely because I like the characters, like I used to do. Now, the stories and the art both need to be good for me to pick up a book. I got the first issue of her latest series, and perhaps that wasn’t enough time to really give it a fair shake, but it didn’t hook me (and at the time I was getting quite a few New 52 books), so sadly her title didn’t make the cut. We already know that she’s getting her movie; and I am quite excited about it. So I imagine this is why they’re continuing to make her a relevant character in the Marvel Universe. 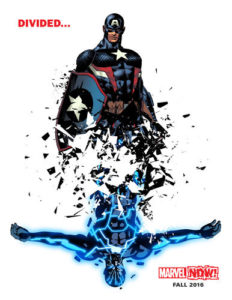 Another one is Steve Rogers: Captain America and Mosaic. Now, I know Mosaic is a new book coming out from Marvel Comics; but I know nothing about the character (if he’s an existing character, completely new character, or why he’s even coming out, when Marvel has thousands upon thousands of existing characters who have plenty of stories left to tell – but hey, let’s clutter up the characters some more by making new characters, rather than investing on some existing characters…) And then there’s Captain America, who has already made waves by declaring his allegiance to Hydra; and that he’s been a Hydra agent all along (but – spoilers! – apparently it was Red Skull who tampered with him, or the timeline or something – gee, not that anyone called that idea… but they revealed that pretty quickly, rather than let the story play out… curious if that’s because of all the negative fan backlash that Marvel got).

Regardless, these are my thoughts on this latest bit of news. At least Marvel was right about one thing – I certainly feel divided from those who are enjoying most of what Marvel is currently dishing out.