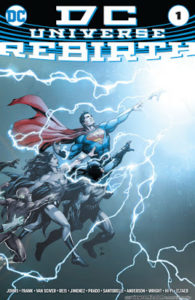 Flashpoint, New 52, Convergence,  Rebirth. DC is following up on the critically panned reboot of the New 52 with yet another reboot following their convergence reboot. What? These aren’t reboots? Oh. Okay. Well I’m not sure what they are but Goeff Johns is writing the kickoff so I’m in.

Story: B+
Something happened during Flashpoint , the series that catapulted DC comics into the New 52 era. Well, something other than the actual Flashpoint event caused by Barry Allen traveling back in time to prevent the death of his mother. There was an outside influence that was the true source of the continuity changes to the DC universe. It wasn’t necessarily Barry changing past events that altered the course of history but something or someone else that acted at the same time. Major pre-New 52 events that were written out of continuity are shown to have actually happened, just wiped from memory.

Let’s be honest here, Rebirth is an apology reboot from DC to fans. After the new 52 pissed off die hard DC fans by rewriting continuity and erasing milestone events, character developments and relationships. DC’s Geoff Johns pens the opening Rebirth story by bringing back a character that had been sorely missing during the New 52. He masterfully weaves this fan favorite throughout five different chapters which introduces and reintroduces characters brought back post convergence.

Sound confusing? It is. But the stories are touching and sincere. It takes a lot for me to get emotional from a comic, I normally need characters that I am familiar with and have already established a liking to. Johns made me shed tears while reading Rebirth #1. I blame a combination of John’s excellent writing, CW’s Berlanti-verse and WB’s animated movies for allowing me to know enough about these characters to care this deeply in one single issue.

Art: A
Various artists provide arts to different chapters of the story. All world class. Phil Jimenez in Chapter 4 is top notch.

Overall: A
If you’re interested in jumping on to DC 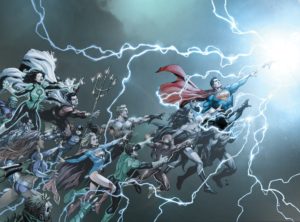 books, this is your opportunity. If you are new to DC continuity, I recommend watching a combination of the animated movies like DC’s Flashpoint Paradox, Doom (really though ,they are all good) and YouTube videos that explain the happenings of the current Rebirth event. In Johns we trust!

This entry was posted in Review and tagged comicreview, Comics, DC, rebirth. Bookmark the permalink.

2 Responses to Comic Catch Up!