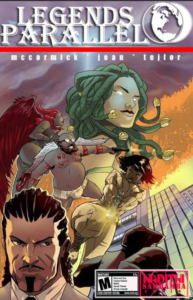 LEGENDS PARALLEL is a, single story, comic book which spans twelve issues. It tells the tale of five Earths, each very different from the others, and the one woman who wants to control them all.

THE STORY IS RATED “M” FOR MATURE, however this review is not.

The story begins with focusing on Tom Hill, who is the CEO of Hill, Inc. He’s staring out from his office at the city of Chicago, and thinking about how he believes – and confirms – that a “multiverse” exists.

STORY: C
Now, there were a few things that I thought were a little off. First, we have Tom Hill, who is clearly the main character of the story. There’s odd moments of dialogue throughout the story; for example when he’s talking about creating a cold fusion reactor for the multiverse thing; that he says that he found the cure to AIDS while searching for this. Seems to be an odd bit of dialogue, as I am not sure how creating a mechanical device led to the cure of AIDS?

Also, the two characters, Valencia Chumbs, who goes by the name of Oshun, named after an African Love Goddess; and Bes, who is supposedly named after an Egyptian Sex God; I guess, I never understood their motivation or their purpose in the book (so far). Also, not sure why someone named after a love goddess and a sex god, would take so much pleasure in killing a guard? 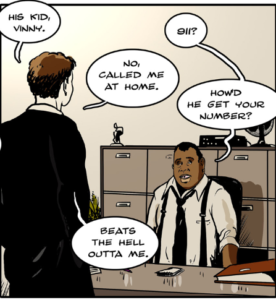 There’s also the next scene, with the police department; where Lt. John Conrad and Captain Walter Thompson are exchanging some dialogue about someone’s kid named Vinny making the call in about a murder. But it’s not very clear what the murder was, who Vinny is.

The dialogue between Tom Hill and Stacy is done very well, as she proves to be a very intelligent woman.

There are also times, where I feel like the story makes unusual jumps between segments (for one, after the good dialogue exchange between Tom Hill and Stacy, it suddenly jumps, without real explanation to Jack of Spades). 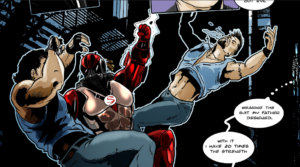 The art throughout the story is very well done; especially for an indie comic. Along with the art, the colors are pretty spot on, with the shading giving the characters a lot of depth in terms of perception. The artistic teams clearly knows how to draw people, buildings, and even a pretty realistic looking car. The artistic team clearly knows how to draw voluptuous black women!

There is one odd thing; the Siafu armor can apparently change itself? Because during a dialogue between Tom Hill and Stacy, when Stacy reveals Tom’s mother had used the armor to kill someone; it’s clearly suited for a female (with ample breast plate covers, that apparently included nipples); but when we see Tom Hill thinking back on using the armor, it was clearly modeled for a male. So 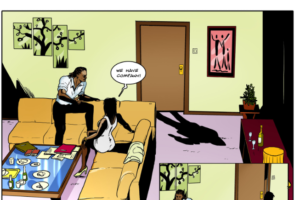 it’s either a glitch in the story, where that’s not made clear (since Tom Hill confirms that it’s the same armor being used) or a missed opportunity to explain some of the capabilities of the armor.

There’s also an odd scene when Jack of Spades is going after Tom Hill, that somehow, his entire shadow is cast into another room – through a shut door, and that’s how Stacy knows that there’s someone on the other side. So that was visually odd. 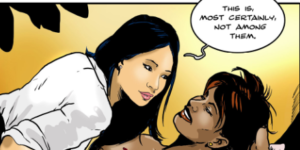 I also found it rather unusual that, Tom Hill, who looks to be at least in his 20’s to mid 20’s has a mother, running around in armor. But not only that, that his mother is a knock down, drag out hottie. The scene here is cropped, but she’s lying on the bed, pretty much nude, and has a very incredible body. So she either had Tom Hill at a pretty young age, or she’s had some surgery to keep her body as fit as she is; especially since gravity apparently has been generous to her, considering her ample… assets. 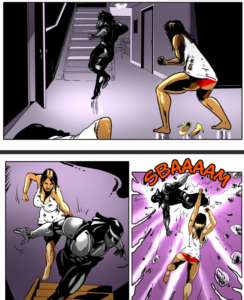 I think the biggest problem is pacing. The story crams too many events and especially too many characters for the first issue. I feel like the issue could have been better focused on Tom Hill, and his dialogue about the multiverse. Show him doing some things in the Siafu suit, fighting crime; rather than just one panel, so we get an idea what this armor is capable of. And end the issue with Jack of Spades, already with his armor, going after them; getting in the fight, revealing that Stacy is a meta; then ending it with Lady Vin (who we see at the very end) ending it with her dialogue. 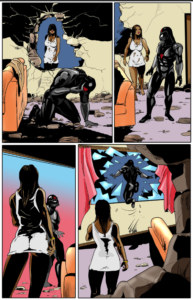 I also feel there were some missed opportunities for some dialogue; for example during the fight between Jack of Spades and Stacy, there’s no words being spoke. I felt like this could have used some filler dialogue. Also when Stacy confronts Jack of Spades after slamming him through a wall, there’s a scene where she just kind of looks at him and they look at each other again, and then he jumps out the window. I can’t tell if she was letting him go on purpose, or what the deal was. But some dialogue here would have fleshed out this scene much better.

All in all, it is just the first issue. And it’s not horrible by any means, and I’d recommend checking it out. 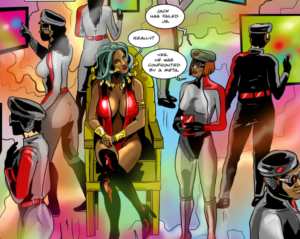