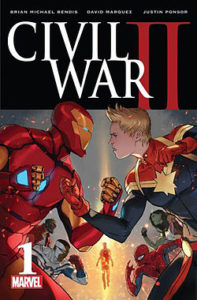 This is how I imagined the conversation at Marvel went when they decided to do a sequel to Marvel’s Civil War:

Axel Alonso: “Oh crap, Captain America Civil War is going to destroy the box office, we should do another Civil War event to capitalize on it.”

Joe Quesada: “But Mr. Alonso, we don’t have a story and the movie is coming out soon.”

Axel Alonso: “Bendis! Make some junk up, I don’t care what it is, fanboys will eat it up!”

Axel Alonso: “MUAHAhahahaha.!!!” *The sound of laughter slowly dies out over the ringing of cash registers*

A new Inhuman (“no more mutants”) has emerged. A young man with precognitive powers. He successfully predicts an attack by a Celestial Destructor which Earth’s 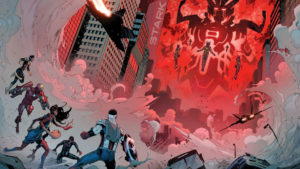 heroes are then able to defend against. Seems pretty straight forward. This new Inhuman would be very advantageous for any  team. Captain Marvel seems to think so. She wants to recruit him immediately. But not Tony Stark. For some friggin’ reason, that I don’t fully understand, decides that this Inhuman is too dangerous to be a member of any team because predicting possible events can be dangerous. Also, they haven’t worked out the Inhuman’s “Probability Ratio” and…you know what, screw it, CIVIL WAR! 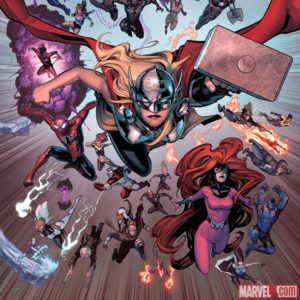 It’s no secret that Marvel has a plethora of artistic talent. If anything, this book is pretty to look at.  David Marquez’s art is incredible. He has a knack for splash pages, action scenes and huge group shots. Justin Ponsor’s colors are soft and beautiful with the perfect tone and flair.

I found myself really admiring the art of Civil War II.

Overall: D
The story of the precognitive Inhuman is decent but not enough to justify launching the Marvel Universe into a Civil War crossover event. Also, Marvel has had a number of notable precogs and clairvoyant characters, what’s the big deal?  I understand that Marvel needs to capitalize on the success of their amazing movies but this story just feels forced and ridiculous. They have very talented writers on their staff, they could have done better.

What worries me most is that because this is Marvel, because this is their big summer crossover event and because the lead-in to this event was weak, they’ll kill a character or completely change their hero/team landscape yet again as some sort of cheap payoff in the story. As a matter of fact, I’m calling it now, a major character will die in Civil War II!

This entry was posted in Review and tagged civilwar2, comicbooks, comicreview, Marvel, marvelcomics. Bookmark the permalink.