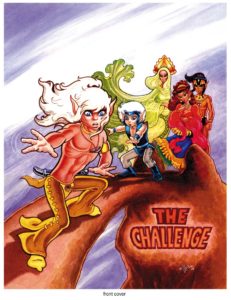 Back again – this time to talk about the original quest of ElfQuest #3. A little reflection on what happened previously with our beloved Wolfriders – Cutter (chief of the Wolfriders) rescued a tribesman named Redlance, which resulted in the humans burning down the forest – and the Wolfriders were forced to go underground to where the trolls lived. The trolls turned around and quickly betrayed them. The Wolfriders braved the desert sands, following Skywise’s lodestone, which led them to a group of desert dwelling elves, known as Sun Folk. So at the end of the second issue, the Wolfriders were taken before Savah, the Mother of Memory, who is the eldest among the Sun Folk, and certainly centuries older than the oldest Wolfrider. She goes on to explain the same story that we saw in the first

issue, that the humans attacked the elves of the Palace, our of fear, when the confused elves extended their hand in friendship. She explains that her own people were forced to also make the trek across the desert, and that’s how Sorrow’s End (the name of the Sun Folk’s village) was formed. 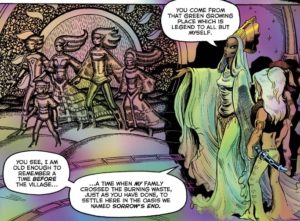 Cutter asks if Savah is what is called one of the High Ones; and she assures him, though she may be old, she is not one of the High Ones. The High Ones are the first elves to have landed on the world, from inside the Palace. The Wolfriders celebrate one of the High Ones, as a part of their bloodline (but more about that in the next issue! So hold on to your hats – or wolf fur – for right now, we will get into that tomorrow!) 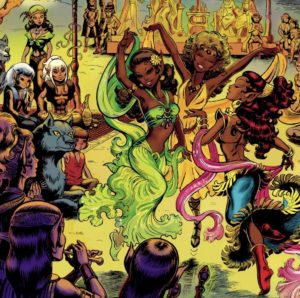 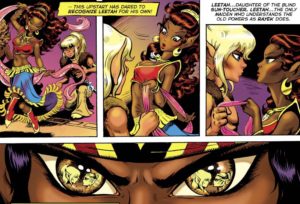 Rayek is less than pleased with the arrival of the Wolfriders. There’s several reasons that Rayek’s hatred of the Wolfriders runs deep – these new elves are excellent hunters, which puts Rayek’s value in Sorrow’s End, much lower. They’re new and different and catch the attention of many of the Sun Folk, when Rayek and his power, might, and magic, was often the center of the people of Sorrow’s End. But the deepest part of that hatred is born out of sheer jealousy of Cutter – and his inability to understand, that in Rayek’s eyes, Leetah is to be his and his alone. But something draws Cutter repeatedly to Leetah, from the very moment he saw her during the siege on Sorrow’s End – something that makes her irresistible to him.

During one of the days, Cutter is out hunting, when he spots Rayek and taunts him that hypnotizing his prey is unfair and takes the game out of the hunt. Rayek doesn’t take kindly to Cutter’s taunt, and turns around and uses the hypnotized animal as an example of what Rayek will do to Cutter if he continues to get in his way, and does not respect him.

Later, Cutter is seen wistfully leaning on his wolf, gazing into Sorrow’s End, and Treestump explains that when two elves see one another and Recognize one another – there’s nothing that can be done, but accept it. You learn that there’s a thing in the world of ElfQuest called Recognition. This is a essentially instinct built into an elf’s genetic pattern, triggered when two elves whose genes would combine to make a good, viable, elf come in contact with one another. Through Recognition, an elf with a Soul Name (not all elves have Soul Names) will have their Soul Name known by the other. So then, what’s a Soul Name? I’d best describe it as the undeniable truth about who you are, down to the very fiber of your being, void of any deception or lies. So essentially, the person knows who you are, fully and truly. That’s about to be important in this issue.

Rayek, tired of Cutter and the Wolfriders, challenges him to a Sun Folk custom called The Challenge of the Head, Hand and Heart. This forces Leetah to make a choice between Cutter and Rayek, and if she can not, they will compete for her hand. Leetah wants to choose Rayek, because they have been courting and flirting for a long time; but when she turns and looks at Cutter, she feels that Recognition; but thinks that she can’t choose 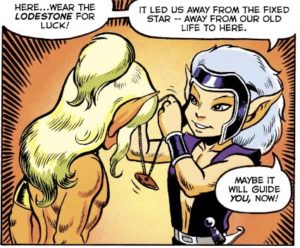 Cutter, because she would rather mate with his wolf than him. (Why would she say that? Well, because she knows Cutter down to his core – but still, seems a little extreme, right? He seems like a great guy, and an attractive one to boot! Well, the next issue tomorrow I go over, will shed some light on this!) Unable to choose, the competition begins, and fate will decide who is to be with Leetah based on who wins. Skywise allows Cutter to wear his lodestone for good luck (since it was lucky enough to lead them to Sorrow’s End).

There are three competitions that they must complete. The first one has them blind folded and standing on two sticks that the Sun Folk move up and down, back and forward on a circular device. Cutter and Rayek seem evenly matched her for a considerably long time, trying to knock the other off, but it’s Cutter who eventually wins the first competition.

The second competition has the Sun Folk taking Rayek’s dagger and Cutter’s sword, New Moon (which he puts up a fight surrendering; the importance of that sword and why it means so much will also come up the next issue). Their weapons are hidden in a nearby cave. But to make it more tricky, both Cutter and Rayek are blindfolded, their hands tied behind their back. So now they must escape their bondage, remove their blind fold, and find and recover their weapon. Cutter does so and stumbles and sees New Moon in a small crevice (similarly, Rayek’s dagger is hidden in the same fashion). Cutter’s not able to reach it, while Rayek uses his necklace to create a device to grab his dagger. He returns to Sorrow’s End and finds that Cutter is already there, defeating Rayek in the second competition. It turns out as Cutter leaned in to get it, the lodestone did that whole magnetic thing and got the New Moon for Cutter. 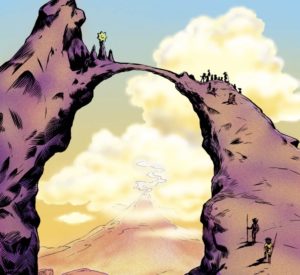 makes the attempt to try and cross the Bridge of Destiny, but between his own fear, and the winds that threaten to blow him off the bridge, Cutter’s not able to, and is overcome with fear and returns back to safety. Not to let this slide, Rayek takes this opportunity to try and belittle Cutter and his foolish fear of heights. Rayek strolls out onto the Bridge of Destiny, arms wide, walking

backwards, taunting how Cutter is gutless and isn’t someone worthy of Leetah’s hand. However, Rayek’s overconfidence is his undoing as a gust of wind knocks him off his balance, and knocks him from the Bridge of Destiny. It is only by sheer luck that Rayek is able to barely catch the edge of the Bridge of Destiny. Cutter, fearful that Rayek will fall to

his death, pushes his fear down, stomach churning, and slowly crawls towards Rayek in attempt to rescue him; and in that moment, Leetah mentally calls out Cutter’s Soul Name, which is Tam.

And this issue ends, literally, with a cliff hanger.

Here’s some cool bonus stuff. Each of the issues of the Original Quest had prints on the back of each issue. Issue #1 had Cutter, #2 had Leetah, #3 had Rayek. 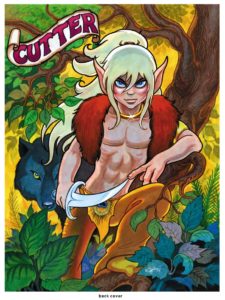 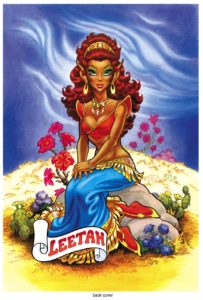 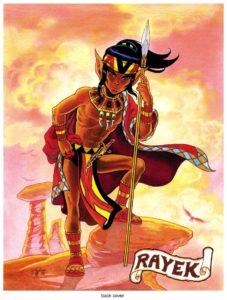 This was a nice thing to have in the third issue – a break down of the Wolfriders (click on it for a larger image) – : 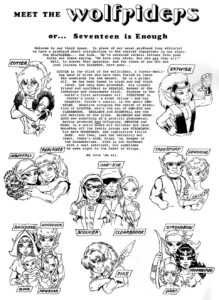 And finally, a black and white cover of Fantasy Quarterly #1 which is where ElfQuest officially first appeared: 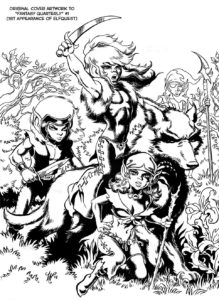