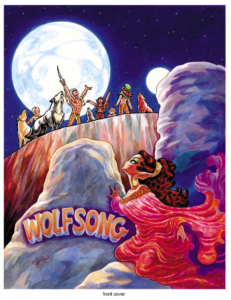 Been busy with a lot of things going on (before you ask, we’re doing all right now) – but I definitely wanted to get back to talking about ElfQuest, especially since Issue #4 of the Original Quest was probably one of my favorite issues for a very long time. (Another set of issues would eventually come along and usurp it’s top issue position, but that’s a long ways down the line!) This issue essentially gives the reader some backstory to Cutter, his father, his mother, and members of his tribe – and why, besides humans – that their numbers are so few. But not only do we learn Cutter’s father & mother’s names, we also get to track his family 10 generations back, and we discover that Cutter has the title of Blood of Ten Chiefs (which, come on, is a pretty cool title to have). So, in the story, Leetah who can’t stop dreaming about Cutter (much to her dismay) hears howling and goes to eavesdrop on what’s happening. 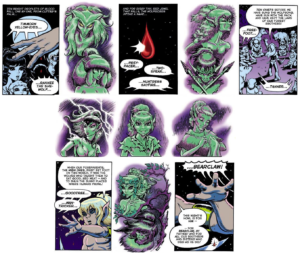 Cutter pricks his hand, and for each drop of blood, they call out the chiefs before Cutter, all in order. This continues until the drop for Bearclaw, his father is called out, in which Cutter catches the drop of blood with his sword, New Moon (which you’re about to learn has some significance; but that’s just the tip of the iceberg about this special little sword). 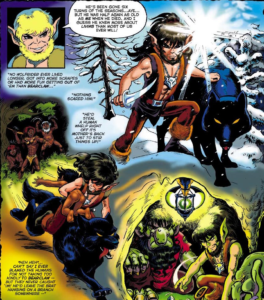 As we go into the flashback of Bearclaw, being told by Treestump, the oldest member of the Wolfriders, we learn that not only did he not have a problem tampering with the humans, but he also dealt with (and gamed with) the very trolls that would eventually go on to betray Cutter and his tribe (locking them out so that only the desert was before them). But we also see that it’s Bearclaw who owns New Moon; and since we know Bearclaw isn’t the leader of the tribe, we can assume something happens to him.

As I said, it wasn’t just the humans that were a problem for the Wolfriders. A new threat enters their woods, and becomes a thread to elf and human alike; killing for sport. The Wolfriders sense it during one of their hunts, and before they know what’s happening, the creature that became known as Madcoil struck with a vengeance, killing the one that could heal people first – murdering Rain, with a brutal swipe of it’s claw. But Rain was just one of the many casualties. Among the slain were other elves, including Joyleaf, Cutter’s mother. 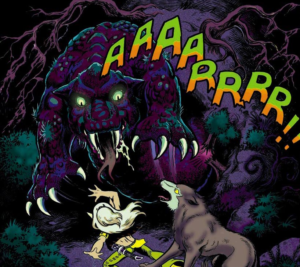 This made Bearclaw furious and he attempted to hunt Madcoil down on his own, but young Cutter would not let him go alone. Bearclaw did sneak off and try to face off with Madcoil and paid for it, with his life. Cutter found his dying father, and took New Moon for himself and returned to the tribe and formed a plan. With his tribe, he was able to lure Madcoil out and deliver the killing blow with New Moon. 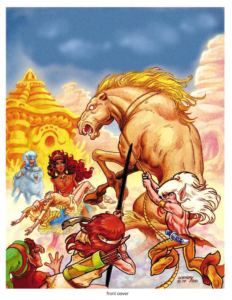 In ElfQuest #5 of the Original Quest, the story centers around these large horse like creatures that the Sun Villagers call “Zwoots.” Several of these creatures can be spotted around Sorrow’s End as beasts of burden; but when a rumbling volcano sends these untamed zwoots in the desert on a stampede that often takes them through Sorrow’s End; as the villagers hide, and accept that the zwoots will destroy much of their land and food, the Wolfriders offer to find a way to save 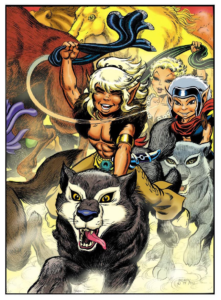 Sorrow’s End by diverting the Zwoot stampede. The Wolfriders do manage to divert the wild Zwoots, and then they proceeded to hunt some of them during the stampede as forms of meat; and Scouter and Dewshine of the Wolfriders, even try to bring a wild zwoot to the village to be tamed and be used as a beast of burden; however, the zwoot is erratic and cause Dewshine to be flung from it and wounded.

Leetah is able to get to Dewshine and save her from being trampled, and similar to how she healed 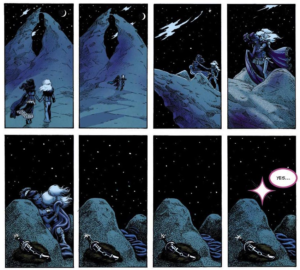 Redlance, she now uses her magical abilities to heal and save Dewshine. In this episode, you can also see the interaction between Wolfriders and Sun Folk have really developed and the two have come to accept one another. And later that night, Leetah finally surrenders to Recognition, and she and Cutter “seal the deal” if you will.

When Savah appears as an Astral Projection to tell Rayek that Leetah has accepted Cutter’s Recognition, Rayek determines that there’s no place for him in Sorrow’s End anymore; now that the Wolfriders are there, there’s ample protectors for Sorrow’s End. 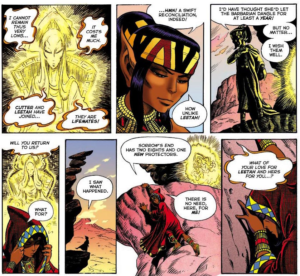 So what is Rayek’s fate? We will find that out soon enough. However, issue #6 fast forwards a few years, and I will cover that next time I do another ElfQuest post!