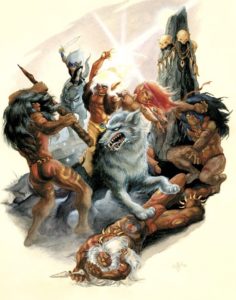 To say ElfQuest is an amazing comic would be sorely under stating how incredible this book is. I admit, I was enthralled by The Hobbit in the 4th grade, so when I saw the cover of ElfQuest – it captured my attention. Not only did it have these more… barbaric looking elves… not your traditional pretty elves, in pretty colors, in pretty clothing – but also these elves… they rode wolves?

This was certainly something that was unheard of. At the time, I was knee deep into my Uncanny X-Men and Avengers books – and ElfQuest was a black and white book – but at the time, actually in magazine format. So it was larger than your standard comic book. Flipping through it, it seemed everything was very … homegrown. 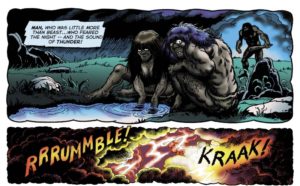 Immediately, the first thing that captured my attention that “super hero” comics did not – was Wendy Pini’s ability to capture sheer emotion in these characters. Covers are one thing – because you can take all the time in the world to make a beautiful cover. But opening the first issue – I saw that remarkable talent for capturing and conveying emotion in every single panel of the first issue. There was no need for words in most panels, because of Wendy’s distinct ability to show something happening; and showing someone’s reaction to those events. 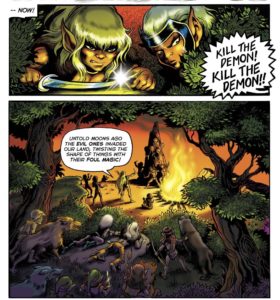 ElfQuest showed so much emotion – and more so, it was… realistic… which is odd, coming from a fantasy setting. I completely understood why the humans feared the “pointed eared demons” – and also, why the elves hated their “round eared enemies.” A hatred was born out of fear, and that hatred carried on for endless generations, which was so beautifully portrayed in the first issue of ElfQuest. There is no question to the reader as to how this world works and why people hate the people that they do. (It’s hauntingly real, in that, to this day, we have hatred in this world, simply because someone is different… so it’s easy to understand how this world works… because you need not look further than our own to understand how it applies).

The other amazing thing about ElfQuest was that every action had a consequence. Rarely, in ElfQuest did someone do or say something, without there being an effect that impacted the entire story. For example, in the first issue, the elf known as Redlance is captured by the humans, to be sacrificed because they’re “demons” and their gods 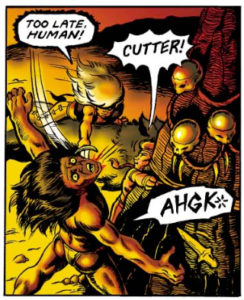 demand the sacrifice. However, Cutter (the chief of the elves known as Wolfriders) is not about to let someone from his tribe be killed, and pulls together some of the elves for a rescue mission. That rescue mission results in one of the humans (the one that was going to kill Redlance) being killed by Cutter.

This, you would think, is not unexpected – this war between elf and human, has been shown to have gone on for centuries. But, this time – because it’s a part of the main story – Cutter’s action has drastic consequences. Demanding reveng 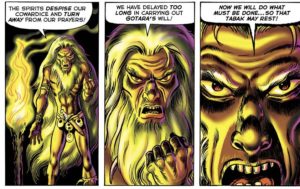 e, the leader of the humans claims that his god has spoken to him and that the lands must be cleansed – with fire.

This leads to the humans burning the lands down, with no regard for themselves or anything else, as the fire immediately burns out of control. This forces the Wolfriders to 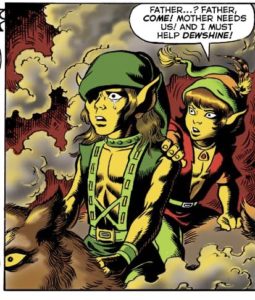 seek shelter – and that they must turn to the trolls (who are unlike any kind of trolls you’ve probably seen before) in order to seek shelter from the fire. But before they escape, Wendy Pini manages, to yet again, capture the emotion on One-Eye’s face so tragically… so beautifully.

Speaking of One-Eye, it reminds me how unique all of these characters are in their appearance. It’s very easy to identify this small tribe… which brings me to another point. Usually in Uncanny X-Men or Avengers or any other standard comic book, you’re only reading about five to seven primary characters. While ElfQuest certainly focuses on Cutter, Skywise and eventually Leetah – the rest of the cast are predominately written throughout the story, so much so, that their personalities shine in just about every panel of this issue; but more so as the original quest continues. 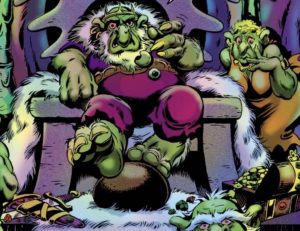 As I was saying, the Wolfriders need to seek the help of the trolls, whom live underground, from the fire that threatens to burn them down. Now, you’d think that these trolls whom they turn to – well, first, you immediately get the impression you shouldn’t trust them… while they seem like a bumbling lot, they also look like the type of people (er, trolls) you shouldn’t trust. But the Wolfriders have little choice but to trust these trolls – who promise them that there’s a new home for them just down this special tunnel. 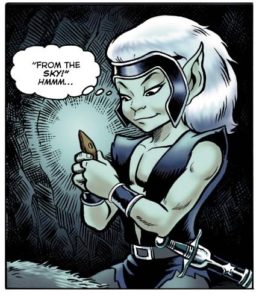 But before they go, the current troll king has his foot, seemingly resting on a normal rock – that is anything but a normal rock. That rock turns out to be a lodestone, fallen from the sky. Skywise gets a piece of it, and uses each of his tribes members hair strands to weave a necklace to keep around his neck.

At any rate, the Wolfriders are led down this tunnel by Picknose, who uses a lever and betrays the elves – leaving them stranded, staring out into a vast sea of endless sand dunes. Things, for our beloved Wolfriders seem to have gone from worse… to… well, even more worse.

I am going to try to cover each of the issues, of at least, the original quest for the 40th Anniversary of ElfQuest’s “Forty Years of Pointed Ears.” But – I recommend that you read the original Quest and the others – legally – on ElfQuest’s own site. 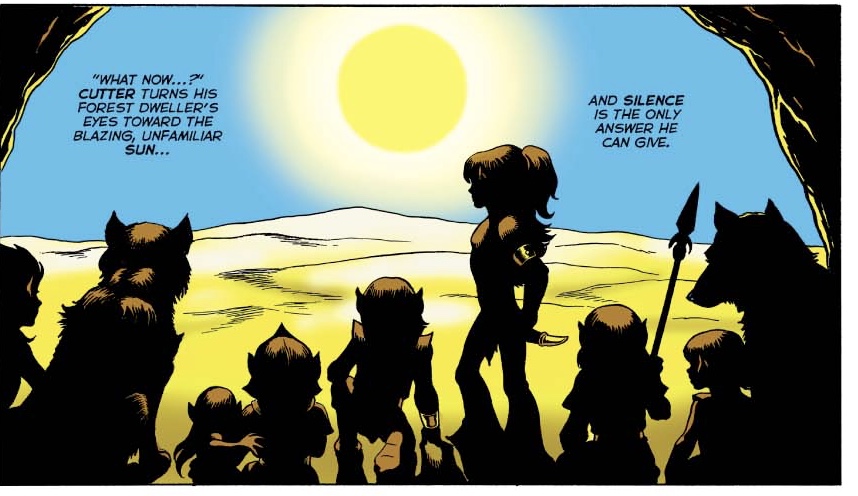