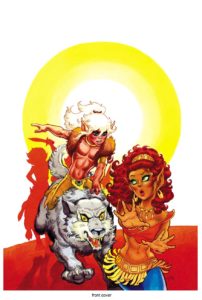 Continuing the celebration of Forty Years of Pointed Ears, you can read ElfQuest #1 (Original Quest) piece from yesterday… Today, I am going to talk about ElfQuest #2 from the original quest.

As you can see from the cover, you can tell that Wendy Pini is an amazing artist. But as always, never judge a book by it’s cover – well, unless it’s ElfQuest and Wendy Pini is doing the art of the cover and the inside.

We return to the Wolfriders having been betrayed by the trolls now staring at a vast and endless sea of scorching hot sands. Once again, Wendy Pini takes the time to draw some beautifully pieces in these panels, where each of the Wolfriders stand out in their appearance and convey such realistic emotion in the panels. 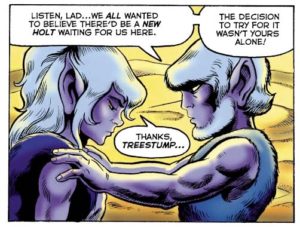 Remember, in the previous issue, where I said everything has a consequence, and Wendy and Richard have set things up? Well, the lodestone that Skywise acquired from the trolls (before their nasty betrayal) 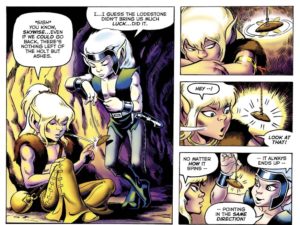 once again comes into play as it continues to always point in the same direction. (Rest assured, this isn’t the only time that lodestone comes into play… but much more on that later).

One of the most incredible things about ElfQuest (aside from the art and story) is the unbreakable bond that exists between Cutter and Skywise; they’re more than best friends, as they say in the series: We are brothers in all but blood. That friendship shows as the series progresses – but I am getting ahead of 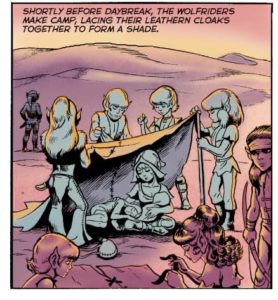 myself again. Believing that the lodestone is pointing them to their new home, they follow it’s lead. The Wolfriders venture int the desert – and struggle through the searing heat of the sun, with no food, and no water (until Cutter is pricked by a cactus and cuts it in half out of frustration – only to discover that it contains water).

The panel where you see Rainsong, with her infant Wing, and young daughter, Newstar, you really get a sense that what these trolls have done, by tricking the Wolfriders to be stuck, is a pretty despicable act. That point is further 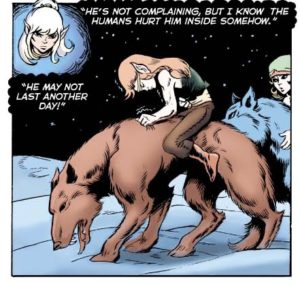 driven, when we get to see Redlance (who was captured and wounded by the humans in the previous issue), is barely able to cling onto his wolf.

Eventually the gut wrenching moment comes, where Redlance knows he’s slowing the others down – and that he will wait for them to find water and food and come back for him (knowing full well, that may never happen). Nightfall, his lifemate, refuses to leave his side. 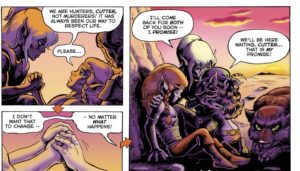 Cutter makes a promise that he will come back for them. It’s a touching moment, where he’s forced to leave Redlance and Nightfall behind…

The others press on, and spot what looks like mountains in the distance, which is a hopeful sign of plants that might be edible, perhaps animals that could be feed upon, and water from a stream or river – but what Cutter and the other Wolfriders find is something beyond what any o them could have probably thought. 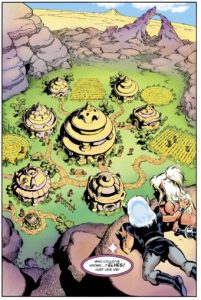 What they do discover is another civilization of elves – but like none they’ve ever seen before. These elves appear to live in tiny huts, and having a small farming community. On top of that they don’t ride wolves or any kind of animal that’s visible to the Wolfriders. 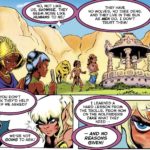 We return to what I mentioned in the previous issue; that every action has a consequence and reaction. Because of what happened with the humans (and how these elves even seem to live like humans), Cutter decides that this time – they won’t politely ask. They will simply take, because that’s what needs to be done. 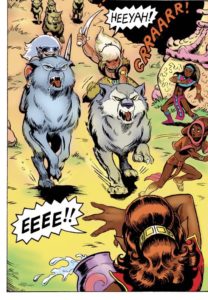 When the Wolfriders charge in, it’s Leetah that Cutter is headed for – but… again, things take an unexpected turn

for Cutter. When Cutter looks down at Leetah – and their eyes lock – he feels something change inside of him. Immediately, he decides to capture her and throw her on his wolf, while the other Wolfriders grab food and water, and retreat back to the top of the mountain.

Rayek, from these new elves who had been seen attempting to court Leetah before the arrival of the Wolfriders, seems to be the only one 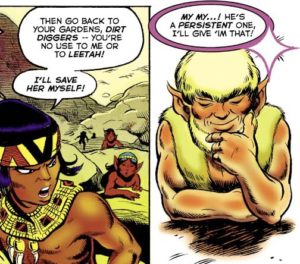 Rayek indeed turns out to be more than spunky – as he almost immediately proves to be a threat by using his own magic to hypnotize Pike, of the Wolfriders. After some fighting where the Wolfriders use Rayek’s headband to cover his eyes, Cutter is reminded of Redlance and Nightfall. He pleads with these new elves for their help – and Leetah reveals that she, like Rayek, has 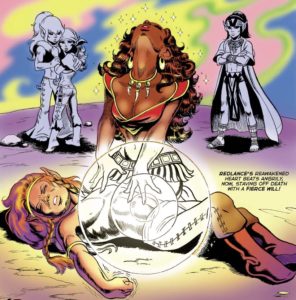 magical abilities – namely, her ability to heal. Rayek demands that Leetah not go, but we see Leetah shows off just how strong of a female she is as she denies Rayek and says that a life is a life, and that she must help.

Rayek refuses to let her go with Cutter alone, and accompanies her and watches on with some distrust still for these savage, barbaric Wolfriders. Leetah however, taps into her magical abilities to heal and manages to save Redlance. This immediately earns Nightfall’s respect and trust, because her lifemate had been saved. 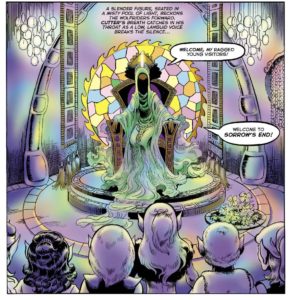 Returning to the village of these new elves, Cutter and the Wolfriders discover that they’re called Sun Folk; and we meet Leetah’s father, who is one of the elders (who is blind, but sees far more than his eyes could ever see). And they decide to take the Wolfriders to Savah – the Mother of Memory – the eldest of all the Sun Folk – and an elf, far older than any Wolfrider ever lived!

PS: It’s Mandy’s birthday tomorrow (Weds) and she’s trying to hit 500 Subscribers. Consider going over there and subscribing to her channel!

Interested in collecting @elfquest? check out my #YouTubeChannel for info on finding EQ Treasures & #Updates on the #Fandom, as well as #vlogs & other fun from me in my “Just Mandy!” series!
Use Hashtags #ElfQuestMerch & #JustMandy!✨🐺💖#SUBSCRIBE TODAY!https://t.co/Lz9Oiymruo pic.twitter.com/XuDlWbJuyK