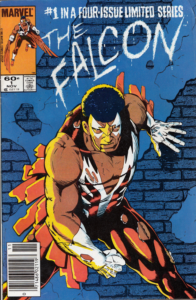 Sometimes, our minds play tricks on us. That “favorite” book, movie, and yes, even comic book, doesn’t turn out to stand the test of time when you go back, with excited, trembling hands to revisit it and take that walk down memory lane.

I’ve done my Retro Reviews for: Secret Defenders, Nomad, and even the entire New Universe line. With each of these, I had memories of fondly remembering how good most of these were; or at least, how good most of it was. For example, I remember pretty much enjoying all of Secret Defenders, but after giving it a re-read with more mature eyes, I was struggling to get through it. When I did the Nomad limited series and full series, it all started off totally great, but by the end, it did get pretty unusual, to the point it was a struggle to get through (some of that, however, I do blame on the artist who they had come aboard towards the end of the series). And New Universe… man, I remembered pretty much enjoying that whole thing, with the exception of Merc Hazard, which I didn’t recall enjoying… and that whole thing, except for DP7 and Psi-Force (but even Psi-Force good off the rails), were a definite struggle to read. I almost couldn’t make it through Justice. 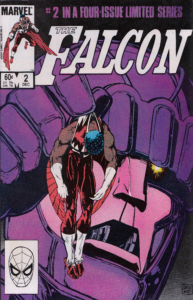 So, all of that said, I am very happy to report, that when I went back and re-read The Falcon (limited series from 1983), I actually enjoyed the entire 4 issue limited series. There were some points in the story where you had to let go of reality, more so than you would for a comic book about super heroes (for example, a gang in Harlem managing to abduct the President of the United States).

The first issue is pretty standard fare; things are bad in the ghetto and there’s a white “buddy” cop who ends up partnering with Falcon throughout the series, named Sargent Tork. Amidst the increasing tensions, a new villain by the name of The Nemesis shows up, tearing down a building. After Nemesis is forced to flee, the owner of the construction site (of Kane Construction) shows up, scolding The Falcon for letting the villain go, and rants about how much money this will cost his construction company. (You can almost see where this is going, if you ever watched any episode of Scooby-Doo). Sure enough, Nemesis shows up again; this time gets defeated by The Falcon and is revealed to be none other than Kane himself, looking to collect insurance money! 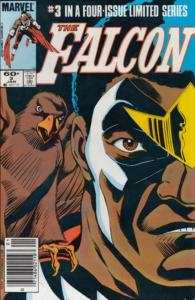 It was the second issue of The Falcon that had initially captured my attention. I was already a fan of the Falcon from Captain America & The Falcon issues, from back in the day; but the second issue featured Falcon being held up by a Sentinel. A Sentinel! If you’ve listened to any of our podcasts, you probably already know what a big X-Men freak I was! So to have a Sentinel in The Falcon series! I had to know why! As it turns out, a damaged Sentinel detects that the Falcon is actually a mutant, and pursues him. There was an uproar about this (apparently), that Marvel had made it a mutant ability that allowed him to speak to Redwing, his falcon bird. This was later undone, and explained away, as the Sentinel was malfunctioning (which makes sense as well, since it was a damaged Sentinel that had put itself together). Still, I loved the story back then. It didn’t bother me one way or another whether Sam was a mutant or not. (I was also about 13 years old, so I didn’t really have a lot of strong opinions about much).

Third issue, as I said before, was where you had to suspend belief a little more than usual, and accept that a street gang in the ghetto would have rocket launchers and the like, and manage to successfully abduct the President of the United States, without the entire US Government coming down and getting involved. This issue also brings in one of my all time favorite (at the time) Spider-Man villains, Electro, who believes that Falcon is after him. 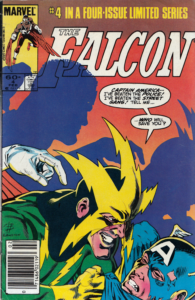 The final issue has Electro defeating Captain America, just as he’s trying to save the President; and it’s Falcon who swoops in (literally!) and saves the day, having a well written, well drawn, well executed battle against Electro, and eventually smooths things over (the best one can) with the gang that abducted the President of the United States, and sets everything straight.

All in all, this entire series is well written, well drawn, perfectly paced; and other than the one thing about the President’s abduction (and the lack of government response, really), the entire series is still as great as I remember it, and I’d have no problem repeatedly reading this. Through and through, The Falcon Limited Series (1983) delivers time and time again, in each issue. If you’ve never read it, you can probably pick up each issue very cheap; you can even purchase them through MyComicShop.com using our Affiliate ID and helping us out! I’d highly recommend giving this one a read!