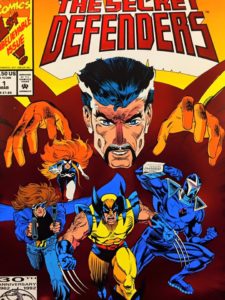 It’s always an interesting voyage. Going back and reading comics that are quite a bit older, that you can swear up and down were “totally awesome comics.”

And so begins, the next Retro Review! Prepare yourself for a mystical adventure going back to 1993 when Marvel Comics gave us Secret Defenders.

Now, I was a huge fan of the original Defenders run, and unlike many, I actually also really enjoyed the New Defenders, as it was called (Defenders #121 or so, and after). The Defenders had come to an end early 1986, after a grand 152 issue run.

So when Marvel presented Secret Defenders, I remember being sincerely interested and super excited when I saw the cover of the first issue! It had Wolverine (which, granted in 1990’s he was everywhere – so why not be on the Secret Defenders book too, right? He was clearly the hook for the selling power). Because the cover also included Doctor Strange (naturally!), Nomad (who I was a really big fan of – read the previous Retro Review where I covered his limited series and series), Spider-Woman (who I loved from Secret Wars, then in West Coast Avengers), and Darkhawk (whom I was a big fan of – loved his original series, loved him in the New Warriors, and loved his guest appearance, also in West Coast Avengers). I thought this was going to be the team. 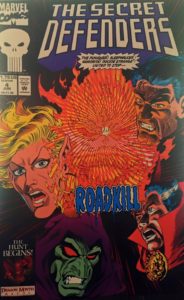 But, not so much. As it turned out, the series had a number of short stories, with rotating characters, depending on who Doctor Strange’s Tarot cards said would be needed. Reason for concern? Well, not so much for me, initially. After all, the second issue had Sleepwalker (who I found interesting), Punisher (the selling point for this story arc), Doctor Strange, and my biggest “comic book crush” – Namorita. So how could it go wrong?

Well, because the stories were all indeed “short stories” – lasting anywhere from two to three issues only, you don’t get a lot of development. The formula seemed to be: 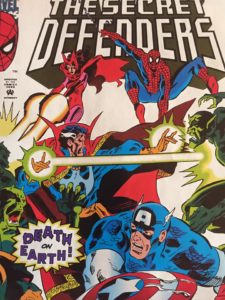 Now, granted, the heroes should always prevail. But the problem is, after they prevail, they all went their separate ways, so you didn’t get to feel any real development with the heroes. And because the stories were always short stories, the villains were typically trivial, or completely made up for the “short story” itself, which loses some “Urmph!” to a “world changing event” that Doctor Strange needs to summon some heroes to do something to “save the world.” You don’t feel like the world’s in all that much danger when the villains are made up for that story; because you can pretty much bet, that no matter what, that villain is not going to pull one over on the heroes. 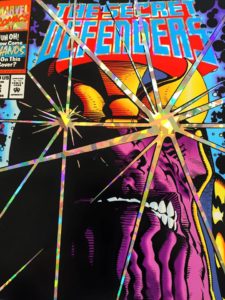 Even the letters column of the book pointed out the relatively weak story telling, and the lack of development, and the heroes always winning in the same formula. I thought it was pretty cool that Marvel was printing both praises, and negative comments in their letter column for the book. (The rest of the letters were recommendations as to who they’d like to see appear as a “team” in the book). So Marvel took a different approach come issue #12 – rather than Doctor Strange summoning up heroes, it was actually Thanos who summoned up a group of villains to do his bidding; this included Rhino, Super Skrull, Nitro and Titanium Man. I thought this was a great twist, because we always see the point of view from the heroes; comics were always about heroes doing heroic things. But this gave us a glimpse at villains, their motives, and how they interacted with one another. (Naturally, Thanos betrays them all by the end, but who didn’t see that coming?) 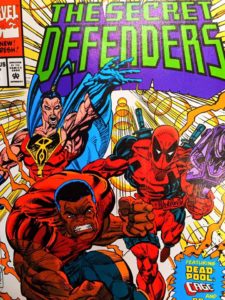 But that didn’t last long. It lasted two or three issues (what a surprise!). But when it returned to the focus being on heroes, it wasn’t Doctor Strange summoning heroes. No. The book takes a turn for the worse (in my own opinion). Doctor Strange bestows (curses) Doctor Anthony Druid (Doctor Druid) with precognitive powers, so that now he sees when bad things are coming down the magical pipeline. So, Doctor Druid (other than being a pretty horrible person, and a worse hero) had been redesigned from his actual, tolerable appearance of being a balding man with the “horse shoe” hair style, to a younger, buffer, stronger, thirty foot wearing pony tail version of himself. 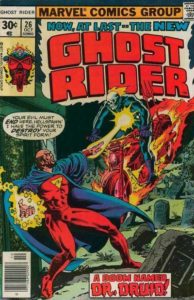 How Doctor Druid USED to look before his horrid 90’s Redesign to make him “marketable.”

So his first mission, he summons up Deadpool and Luke Cage. Now one thing that bothered me – so Luke Cage is hired to protect this museum from theft, right? So some people break in and are trying to steal a mystical item… and what’s Luke Cage do? He breaks through a wall in the museum. Then goes on about how he won’t let anyone steal from a place he’s been hired to protect – but apparently, him smashing through the museum’s wall was okay? I get that it’s dramatic, but it’s also bad story telling. But anyway – the bad guys get the magical thing, and make good of their escape. So now the heroes are chasing them down, and as a consequence of this woman using magic, she’s forced to drain the life of people – and enter stage right, the unfortunate soul of Cody. He’s killed by her lethal kiss, but as the magic flows all around, his body is reanimated and he adapts the “heroic name” of Cadavar, and what does he do? He rips out one of his own ribs, and it becomes a mystical sword. (I am not kidding you). Along with Doctor Druid’s team is a woman named Shadowoman (that’s not a typo – it’s Shadowoman – not Shadow Woman, but Shadowoman – with only one “w” in there). 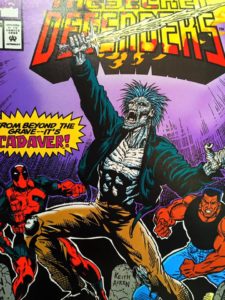 The book then tries to appease fans, who complained about a lack of “main stay” characters for the cast, but giving us Doctor Druid, Shadowoman, and Cadaver as main stay characters, with the always shady Doctor Druid, clearly displaying questionable motives (and acting completely horrid throughout his time as the team’s “leader”).

What I never understood about Shadowoman (that pains me to type) is that she was “dead” but alive (thanks to Doctor Druid’s questionable actions), but when she was out being a hero – she wore a costume similar to that of the original Spider-Woman. And while the original Spider-Woman’s name was Jessica Drew, Shadowoman’s name was Julia. It didn’t help that they both had long, flowing, black hair that was drawn very similar. None of this was ever explained. 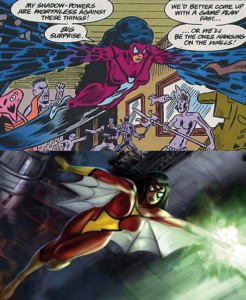 Will the real Spider-Woman please stand up?

Shadowoman would eventually learn what Doctor Druid did to her, and get a new name (Sepulchre) and get a major costume improvement (though, as a New Warriors fan, I found it sort of resembled Turbo’s costume; but nowhere near as much as the exact copy of Spider-Woman’s costume she wore as Shadowoman).

One of the more stranger moments of Secret Defenders to me, is the time that the writer for the series, seemed like they might have been out of ideas for the story; and needed to pull a random collection of heroes that were somewhat recognizable; but wasn’t sure how to do it… 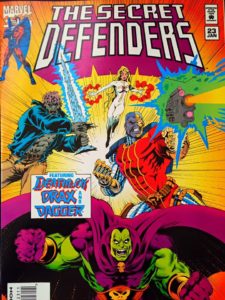 So what they did was break out an issue of the Marvel Universe Handbook (man, I loved those things! Still have them all!) and didn’t get any further than the letter “D” in the Marvel Universe Handbook as one team consisted of: Dagger, Deathlok and Drax the Destroyer. Now, I am a fan of Deathlok (his series may be one of the upcoming Retro Reviews I do), and loved Dagger (especially throughout her series with Cloak, and her appearances in New Warriors). Drax, at the time, I wasn’t exactly a fan of. He reminded me too much of the Hulk (back then, because he was still pretty brainless; and like Hulk, was all green, and like Hulk had purple for his choice of clothing colors). 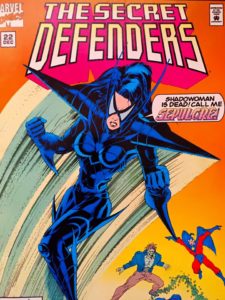 Another odd moment was the introduction of Joshua Pryce, who carried around with him, a head in a jar (that could speak to him). He was a part of a mystical band that recognized Doctor Druid as the real threat. But that’s normal right? Well, what’s odd (I don’t know if something changed in the story because the series was suddenly coming to an end) – but the head that Joshua carried with him, had abilities; and often killed people that helped them (like when they hitchiked and got a ride from a trucker; the head inside the jar blew up the truck, killing the driver; then it tried to kill a pregnant woman and her husband by dropping beams on them from a construction site)… and this is somehow supposed to be a hero? So I am not sure if something did change, but it was odd – that these two (or at least the head in the jar) would be concerned about the end of the world, when it’s doing it’s own killing spree along the way to find Doctor Druid. 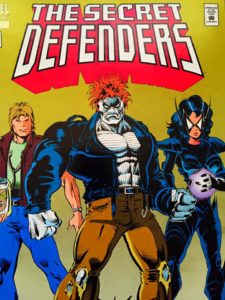 The series came to an end with issue #25, with the corrupted Doctor Druid defeated and restored (along with Cadavar and Sepulchre killed in the issue and restored in the issue). Sepulchre would eventually go on to make a few appearances (even recently), like trying to be a baby sitter for Luke Cage. Joshua Pryce joined the recent Howling Commandos led by Man Wolf. Cadaver, not sure if he ever resurfaced.

So with all of that summary said – let’s break down how I would rate this book.

Because of the rotating characters, it did make it hard to get a feel for any of the characters (even if you were familiar with them). In some cases, some of the characters were written worse than one shot guest appearances in a comic. And because, near the end, the team became about Doctor Druid, Shadowoman and Cadavar primarily; while it was nice to see them try to make a main stay cast; it was just three characters I cared nothing for.

The artist changed every couple of stories it felt like, and over all, it seemed like a lot of artists on this book were just going through the motions. Sometimes the art was pretty good, sometimes, it wasn’t there at all. So the lack of consistency, makes me land this at an average score of “C.”

OVER ALL: C
Over all, with both story and art with a C – I’d say the book sits there. It’s cool to see some characters you enjoy doing something different than what they primarily did in their own titles or team books. But the stories were generally weak, making it hard to feel like you were really going to enjoy the experience.

Until next time!
– Uncanny Tawmis Logue