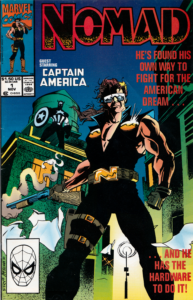 It’s no big secret. I am a fan of the obscure characters. And most often times, the more obscure a character is, the more I tend to like them. This is not to be “different” or “rage against the crowd” who enjoys the more popular characters. I think a lot of this has to do with the aspiring writer within me. If there’s an obscure character, there’s untapped potential to flesh out that character and tell some stories with them.

So when a (good) writer does this; I typically really enjoy the books. This is why I always looked back very fondly of the character Jack Monroe – better known as Nomad.

I am not going to go into the “backstory” of Jack Monroe; because it ties to Captain America – one of the Captain America’s anyway – when he had the name “Bucky” (not to be confused with the original Bucky, who was the side kick of Steve Rogers, better known as Captain America). Like I said, if you look too deep into his backstory, you’re going to end up with a convoluted headache.

However, writer Fabian Nicieza took Jack Monroe, after the events of Captain America, and having adopted the name “Nomad” (and apparently growing his hair out – a lot). It started with a four issue limited series of Nomad, and it essentially tells about how Jack Monroe has struck out on his own – become his own man, away from the shadow of Captain America. He “adopts” (well, technically, kidnaps if you really look at it) a baby, infant girl and gives her the name “Bucky” (granted the woman he took her from was a prostitute and a drug addict). 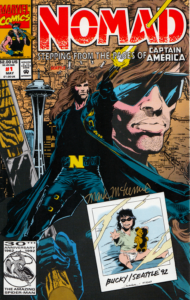 During the time of the comic, I never questioned the idea of Jack Monroe hauling baby Bucky around and dragging her into trouble. (There were times where he had made several underground contacts and would leave Baby Bucky in the hands of people he trusted – well, as much as Jack Monroe trusted anyone anyway).

The original series started off very strong. It tackled a number of real life events head on, and didn’t shy away from it – whether it was drug addiction, the battle (and fear) that was so wide spread (due to a lot of lack of information) about HIV and AIDS, and racism (among other subjects). The book did not shy away from this wandering warrior taking on odd jobs that had him dealing with an assortment of things. 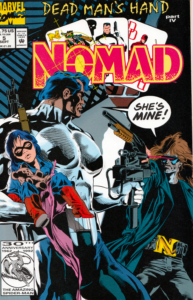 In the beginning; the series also featured a wide assortment of guest stars ranging from The Punisher, Deadpool, Daredevil, Red Wolf and Gambit. However, as the series progressed, there were fewer and fewer guest stars (which I always felt was a shame; because here you have this character essentially traveling across the United States; it seemed like there was an endless pool of character for Jack to run into, and team up with, or be at odds with).

As the series went on, a new artist by the name of Rick Mays became the regular artist. And it’s true that an artist helps tell the story that the writer is telling. For me, I was not a fan of Rick Mays art style; and I felt because of that, the story (for me) began to suffer. 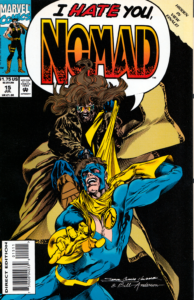 However, I’d never say I hated the book. The ending got to be a little rushed – but that could be because around issue #21 or #22, they had announced that issue #25 was going to be the final issue.

And here’s where memory is always a little foggy; I had complained that Winter Soldier killed Jack Monroe and never suffered any consequences because he was “brain washed” and not of his own mind. However, in issue #25 of Nomad, Jack Monroe guns down and kills about sixty white supremacists. Now, granted – no one likes a white supremacists; but to openly gun them down? In the end, Jack Monroe blows himself up (and many others) in order to stop an event from unfolding; and while it appears he dies in the explosion; he’s found, barely breathing and re-enters suspended animation once more to preserve his life.

He would eventually re-appear, now mind controlled himself, as Scourge in the pages of Thunderbolts – but that’s a Retro Review for another time.

All together, I’d give it the following rankings judging the entire series: 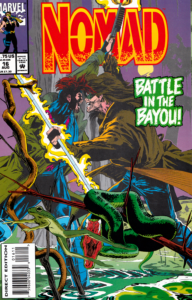 Story: B+
The story was typically quite engaging and cutting edge for its time. Fabian was not afraid to push the stories to the edge and deal with real world problems through the comic. There was even some editorial debates; because he had apparently planned on giving Nomad HIV, but the editors were against it.

Art: C
Most of the art throughout the series was pretty good (though it was frequently chalk full of very 80’s women – hey, the comic was made back then – with some voluptuous ladies to fill the pages). But hey, a renegade on the road; whose best friends were sometimes prostitutes, what can you expect? Artist Rick Mays, as I said, wasn’t one I enjoyed. He’s not a bad artist by any stretch of the imagination; just didn’t think it worked well with this book.

Over All: B
The stories were mostly spot on; the art tended to be good (even when it wasn’t my style, with the exception of a few panels that made me cringe).

This Retro Review is brought to you by Tawmis Logue!