No, this isn’t a Retro Review about the crash movie. Rather, this is a Retro Review on Marvel’s 12 issue limited series of Team America. (I believe it was slated to go longer, but something happened that brought this series to an end by issue 12 – and, it might have been because of low sales!) So why did Marvel make a series called Team America back in 1982? Well, back in the 1980’s – Marvel was in the habit of making several comics that were based off toys; for example Rom and Micronauts. (They also did GI Joe, but to be fair, at the time GI Joe also had an insanely successful cartoon backing it up). So if you’re not familiar with Team America, let me present this video for you, before I got into my Retro Review of the comic.

It’s pretty amazing, right? I remember having one of these… I can’t recall which one, but I remember this vividly as a kid. (Of course, I didn’t have the super cool backyard with these big dirt hills, so I had to make do with what I had!) But this isn’t about my memory down that – it’s about the comics based off these toys. 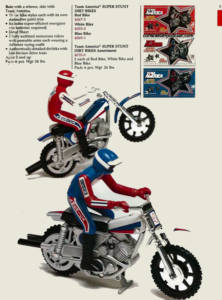 Much like ROM and Micronauts, Marvel was essentially taking these toys and developing character backgrounds and stories for them. They played it smart, and had the first couple of issues introduce and kind of give you a background to each of the characters. I don’t think the toys ever had names for the different motorcyclists, they just had different colors (pretty much of the same paint job, with swapped pallets). So if I am not mistaken, Marvel had free reign to do what they needed to do to help sell these toys for Ideal Toys Corp.

Marvel also wasn’t afraid to directly tie these characters into the Marvel Universe, and not hang them out to dry as just stand alone type characters. In the very first issue of Team America, it opens with the mysterious dark rider, Marauder, getting into a facility to erase some data files. And in the very next panel, after all of that happens, we see an immediate reference to Hydra.

As a matter of fact, they very first issue, has Team America pretty much in a big battle against Hydra, by the end of the issue. 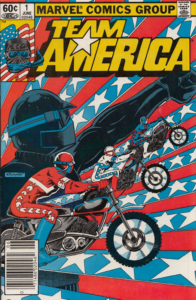 So I thought it was pretty cool that Marvel was at least trying to weave these characters into the Marvel Universe. In later issues, we even get an appearance from Iron Man and Ghost Rider. (These were probably attempts to save the series from cancellation is my guess).

By the second issue, we’re introduced to two new members of Team America; Cowboy and Wrench. It’s the first time that I also noticed that Bill Mantlo was attached as one of the writers. Bill had also done ROM and Micronauts, so I wonder if he was just who they tapped to handle these “toys to comics” type comic book scripting jobs. 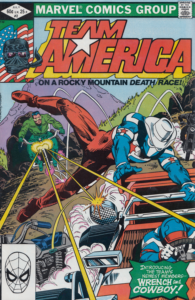 has a pretty extensive history with Marvel Comics. Most of what he’s done, I’ve enjoyed (including ROM and Micronauts… though I had my issues with what he did during his run in Alpha Flight), there’s no denying that Bill was extremely talented. Unfortunately, if you’re not aware, while rollerblading, Bill was struck by a car, who zoomed away, and to this day, has never been identified. Bill suffered greatly, being in a coma for some time, before awakening with extensive brain damage that has left him in a home care situation. A paypal has been set up in order to accept donations to help with Bill Mantlo’s care by comic book artist Greg Pak. In this issue, something mysterious begins to happen, as a fight with some local motorcycle gangs breaks out between them and Team America, and Wrench and Cowboy show up; and oddly, despite having never met one another, they each knew their names, as if psychically connected. 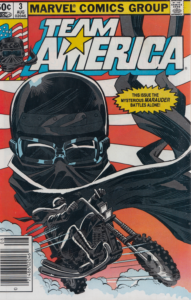 The next issue is a little corny; it introduces four new villains that belong to the Mayhem Organization; with members being Master Mayhem, Mister Magic, Mister Muscle and Mister Mind. (I couldn’t make this up, if I tried). Master Mayhem looks even worse that the Captain America foe, Madcap (who, okay, I admit I liked his costume), but Master Mayhem is something else entirely. Mister Magic just looks like an 1800 Male Magician, Mister Muscle looks like your typical circus muscle man, and Mister Mind looks like a flesh colored (as in non green) version of the Hulk foe, The Leader. Their assignment is to capture or kill, The Marauder. And they almost manage to do so, except, when the Marauder is in trouble, he suddenly has the ability to control his bike independently, which helps turn the tide of battle. It eventually boils down to all of Team America showing up and help defeat Master Mayhem. One very cool thing about this issue, is at the end; they do those cool “one page, pin ups” – but within those pin ups, they have it as a Hydra file, that has some information about the character featured in the pin up. (And if you know me, I love me some Marvel Universe Handbook type stuff!) 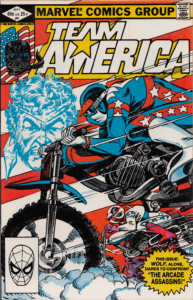 The stories continue to get odd, when the next issue focuses on one of their members, Wolf. Essentially, there’s an arcade / amusement park, where – now follow me here – they put kids into the arcade unit itself, and use their mental capacity to “power” the arcade games. Now… I don’t know why these guys couldn’t just use electricity like everyone else; but that’s where this story goes. Wolf gets involved, and ends up in a fight, but overwhelmed, he’s beaten. He, along with the rest of the kids, are placed on a roller-coaster doomed as a one way ride, when suddenly Marauder shows up. Wolf breaks free, and like a good episode of Scooby-Doo, the evil amusement park owners are defeated and captured and turned over to the local authorities by Team America. 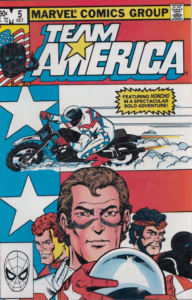 The next issue gets a little more normal. This one focuses on Honcho, who is pretty much the “leader” of Team America (even as his nick name indicates, funny how that works out). It hearkens back to his days, before Team America when he was a top government spy/agent. He stumbles onto something, and begins to get himself in a bit of trouble. Just when things look bad (he’s been tied up and drowning!), the Marauder shows up, and helps turn the tide of the battle.

I am not sure if it was intended, but even the art in this issue, the way Honcho and the others are drawn, also seems to hearken back to that 1950’s look. 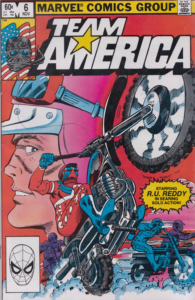 As I had mentioned before, they began focusing on each character per issue (Wolf, then Honcho) and then the next issue focuses on R. U. Reddy. (Are you ready?) This issue has R. U. Reddy fighting off some men who try to shoot him, but end off veering off the road into some green liquid that devours them. R. U. Reddy ends up going to a small motel, where the green liquid seems to be following him. It devours the owners dog, so R. U. Reddy grabs the beautiful, female owner, Evelyn, and rides away; but the green liquid continues to grow and follow, even attempting to grab them, as if it were also alive. Reddy discovers that a man, looking for a way to deal with oil spills created the slime to devour. However, the slime devoured anything but oil. The Marauder shows up and battles the man who created the slime; and the man ends up falling and being devoured by the very slime he created. But it doesn’t end there! Reddy and Evelyn try to escape and find that they’ve been cut off by the slime. So they do one of those cool jumps that the toy is known for an land on the freeway, where Reddy carjacks a man driving a flammable truck and drives it into the slime, jumping out last minute. The slime ignites and apparently dies a burning death.

I’ll stop there, rather than doing a synopsis of all 12 issues. As you see, some of the stories were good, some were unusual, and some were just really out there. Over all, I’d give this entire series a “C.” Because it is entertaining here and there, the art is really clean (if you don’t mind just seeing motocycles zipping around), I thought they did a good job, trying to make Team America a part of the Marvel Universe, even so far as giving them all powers that links them together. I will probably read this again, every few years, because it’s not horrible; but it’s not exactly good either.

Below are the other covers, in the event you were interested: 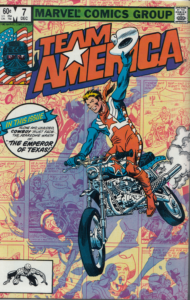 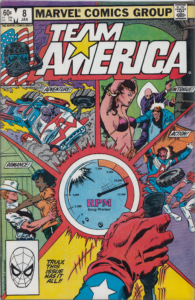 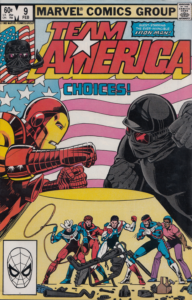 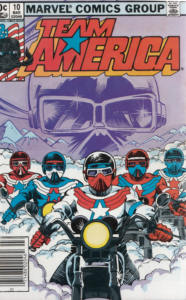 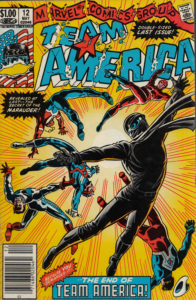