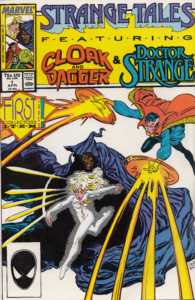 So, as I have said in my previous Retro Reviews; what I have been doing is going back through the lesser known books that I recall enjoying “back in the day” and see if they still hold up today, or if my young, impressionable mind was being side swiped by something. This Retro Review will center on Marvel’s Strange Tales (Volume 2) that focused on one half of the book being about Doctor Strange and the second half of the book focused on Cloak & Dagger.

So what I “remember” liking about this book is the fact that it had Doctor Strange in it and it had Cloak & Dagger. Now, I was never a fan of Doctor Strange and his solo books (even back when I had a young, impressionable mind!), but I absolutely loved him in the original Defenders run, which I was an avid fan of. And I always enjoyed the Cloak & Dagger mini series (and I think at the time this launched, they had a short lived series before this, which is why they were in this – to essentially continue their adventures, because their own solo book didn’t have the sales). 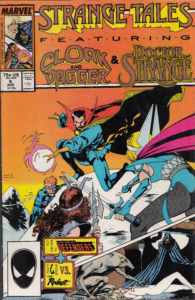 Well, apparently whatever it was that I enjoyed in this series as a kid, did not hold up. Now the first issue was pretty good; set things up nicely. As a matter of fact, the first few issues are actually pretty solid. For example, Nightmare begins tapping into Cloak through his, well, Cloak powers and causing all kinds of issues. But it didn’t last long; by the 5th issue, Cloak & Dagger were fighting a new villain by the name of the Rodent; who was essentially a humanoid rodent… and where things should have gotten better, got even worse in the Doctor Strange story line. So over in the Doctor Strange side, he comes into contact (for lack of a better word) spirit forms of the New Defenders who sacrificed themselves (Valkyrie, Manslaughter, Andromeda, and Interloper) – but these characters are written so horribly out of character, it’s literally inexcusable. And as someone who enjoyed The New Defenders immensely, it was difficult to even try and enjoy the story. 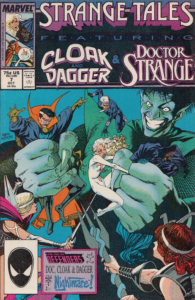 These horribly written version of the New Defenders continues for quite a few issues (and apparently the artist thinks Manslaughter only knows how to slink around with a knife in his mouth, as seen in these two covers). There’s also clearly a disconnect between artist for the cover and the interior artist, because Andromeda keeps being drawn with “pink” flesh on the covers; but the interior pages have her in her traditional Atlantian “blue” skin. This story concludes Bill’s run on the title.

So what happens next when a new writer comes on board to any title?

They all want to leave their mark. They want to 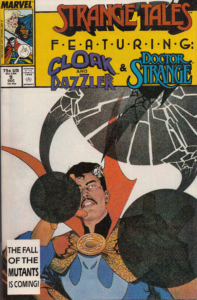 immediately shake things up, rather than transitioning their stories smoothly. So with the new writer, the first thing they do is have Dagger leave Cloak. So this begins a series of issues where Cloak is pairing up with other characters, and doing the whole play on “Cloak & Dagger” (with the first one being “Cloak & Dazzler”). Then later, they do a “Black Cat & Dagger” when they want to bring the focus back to Dagger. While I get that they were trying to do something different, I don’t feel like it worked. These stories didn’t feel natural; they felt very, very, very forced as in “Shake things up, forsake the story, let’s see if we can get some reader reactions!” 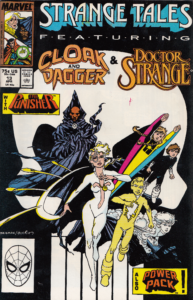 Eventually, Cloak & Dagger are reunited, and Power Pack begins to guest star in a few issues (which is no surprise, since Power Pack was pushed pretty hard in the 90’s – appearing in Spider-Man, X-Men, X-Factor, Thor, etc). But I didn’t mind that, because I actually enjoyed the original Power Pack series (none of the ones that followed, however). I feel like the writer(s) were trying to bring the focus back to the story for Cloak & Dagger, and make them feel like teen runaways again.

The Doctor Strange story, by this point, is so far gone, that I am literally reading it with so very little interest. 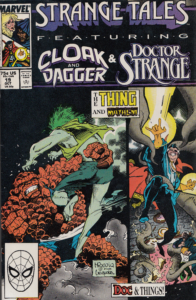 #19, it felt more like a chore to finish it, rather than an enjoyable read. After the 11th issue of this series, with the Doctor Strange side, it was so oddly paced, the story seemed to be bouncing around everywhere.

Whether you’re a Doctor Strange fan or a Cloak & Dagger fan, my suggestion is; unless you’re a completionist or someone who enjoys subjecting their brain to torture, I would otherwise, avoid this series. It’s nowhere near as glorious as I remember it being.