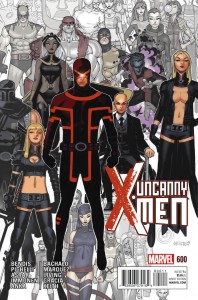 Uncanny X-Men #600 – the final issue of the series, but my final issue was long before this.

I had previously written, how after 30 years of collecting Uncanny X-Men, Marvel had finally done what I never thought possible – and made the one book I grew up with, felt the most attached to, and felt like it was a part of me – and made it a stranger to me. A stranger I no longer wanted to know or care for. Marvel had successfully introduced so many mutants, that being a mutant meant nothing. They also introduced so many unusual mutants, that it had become a bad “B” movie for the cast of mutants. I felt that the Uncanny X-Men – and all the X-Books in general – had lost their focus. I can’t tell if Marvel felt that way too – and began grasping at anything and everything in order to try and save the book… Whatever the case – it finally happened, after more than 30 years, I ceased collecting Uncanny X-Men. (A shame too, because it would eventually “end” with issue #600, but I couldn’t bring myself to buy the last year or so, at full price – if I find them in a dollar bin, I may pick them up to “complete” that collection). Both the story and art – simply were not my cup of tea. 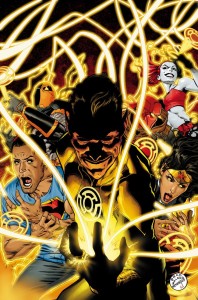 Sinestro by Cullen Bunn and team is a MUST read for EVERYONE!

Anyway – fast forward to news that Cullen Bunn is going to begin writing Uncanny X-Men. Now, Cullen Bunn had all my faith in the world because he was writing an amazing Sinestro book. I really can’t even put into words how much I have been enjoying Sinestro. And the thing is, before the New 52, I was admittedly not a big DC Comics fan (because I always felt like characters like Superman were just too powerful, and Batman never really lost – I was uneducated, really, in the ways of DC Comics). However, the New 52 with it’s “clean, new continuity” made it easy for me to jump in and get a feel for these characters. I literally collected almost every single title that launched from the New 52. And while some were good, some stuck out. The recent Convergence has, admittedly shook my faith in DC Comics; but there’s titles that they’re pumping out that are just amazing – and Sinestro – a character I knew so little about – ranks right at the top. Every week that Sinestro is out – it is, without fail, the first comic I read. Because Cullen knows how to write a good story; and he’s teamed up with an amazing penciller (Brad Walker) and a team of colorists that make the book come alive! 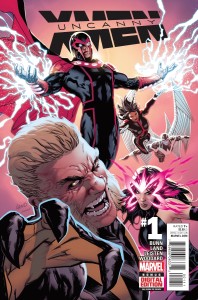 So news is released that he’s going to be teaming up with Greg Land; an artist I am very familiar with and appreciate and dig the art he dishes out. So now, I wait and see who the team will consist of. There’s certainly a thousand mutants that Cullen and Land can pull from to assemble this new team of Uncanny X-Men. I hear about how Cullen wants to make a harder edged version of the standard Uncanny X-Men. This captures my attention even more, based on how he has written Sinestro with a “harder edge” as well, as the new guardians of Earth. Then I see the team he has assembled for the book: Magneto, Sabretooth, Psylocke, M, Archangel (and Mystique). Okay. I admit, you had me at Sabretooth. So I picked up the first issue of Uncanny X-Men. You know what I did after I read it? I immediately read it again. Why? Because I could not believe it was that good. I mean, I knew it was Cullen and Land, and the cover looked amazing; but you never judge a book by its cover. I knew these two were on the book, and I figured it would be good, but my expectations of it really being a good book, were actually pretty low. (Not because of a lack of faith in them; far from that… more because… well, when it comes to Marvel and the Uncanny X-Men, by this point… well, just call me jaded, if you will). I was pleasantly surprised to see the book was so well written (again, not that I lacked faith in Cullen or Land; but they were taking over, what I considered a gigantic mess! Even the best can’t come out of that all the time!) The art is fantastic. The coloring pops. It’s no longer the flat art and colors that had existed the last few years of Uncanny X-Men. The book was alive with characters. And good characters. And good characters written well. The scene with Psylocke unleashing Archangel – I think I might have cried a little manly tear. 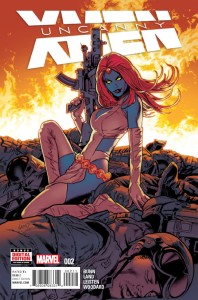 Uncanny X-Men #2 features Mystique – and I will never complain about that!

But it could be a fluke, right? (Again, despite how good it was, and how great the creative team was; I had spent years purchasing Uncanny X-Men more out of habit than actually caring anything what was happening in the book). So I picked up Uncanny X-Men #2 when it came out. Once again, more than happy how that issue was done. It primarily featured Mystique and her mission and what she has to do; but it also has a fantastic set of circumstances between M, Sabretooth and a healing mutant who they’re trying to save (won’t give away any spoilers) and what happens – when Sabretooth tries to save this mutant, and the mutant doesn’t listen and does exactly the opposite of what Sabretooth says! The “Aw kid, don’t you recognize a trap?” line from Sabretooth showed a more compassionate side of Sabretooth, which as an avid fan of this murderous mutant, I certainly did not mind. It shows depth of the character; that he’s more than just a killing machine (though, he has no problem showing that side of him in Uncanny X-Men either).

I am in love with the Uncanny X-Men again; and if you, like me, gave up on them at some point in recent years; might I recommend giving this new series a chance. You might be pleasantly surprised.

2 Responses to An Uncanny Change.