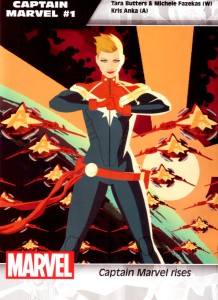 Fan favorite Carol Danvers is back in her 6th solo series as Captain Marvel. This time around, Captain Marvel receives the Hollywood treatment by Agent Carter show runners, Michele Fazekas and Tara Butters. The level of quality shows in this great sci-fi story that could have easily been written for television.

Carol Danvers has taken the assignment of Commanding Officer on board the new low-orbit space station, Alpha Flight. Accompanied by none other than Puck, Sasquatch and Aurora of the Canadian super team (you guessed it) Alpha Flight. Abigail Brand, ex-commander of S.W.O.R.D.’s low orbit space, The Peak, is her second in command.  Carol, as head of the New Alpha Flight along with Abigail Brand are earth’s first line of defense against extra terrestrial attacks.   I have to admit (and Tawmis will testify to this) I have never been a big fan of Alpha Flight but what I am a huge fan of is good writers doing justice to lesser known characters.  Fazekas and Butters do just that.

Captain Marvel’s new appointment as the Space Station commander gets off to a pretty mundane start. Contract disputes with the station janitors and day to day tasks leave Danvers a bit disillusioned, that is, until she discovers a mysterious ghost ship drifting towards Earth. With the help of Alpha Flight, Captain Marvel boards the ghost ship and accidentally activates the ship’s power while on board, triggering a full on attack.

Alpha Flight fends off the attack but not without a few consequences. Captain Marvel’s powers have been depleted and she begins having visions of the memories of Mar-Vell, the Kree Soldier from which Danver’s powers were derived from.  The crew learns that the ghost ship is somehow causing Captain Marvel’s issues and decide to completely destroy it as opposed to researching and exploring it. That plan is quickly interrupted when a second ship, similar to the first,  approaches with a live crew, hell bent on destroying Captain Marvel.

Captain Marvel’s art is very clean. The space station Hala Star design looks great . Alpha Flight crew’s uniforms are a nice bland of the Canadian team’s north star design mixed with Captain Marvel’s Hala Star.  The spaceship’s Alpha Flight rides are remeniscint of the Nova Corp ships used in the Guardians of the Galaxy movie. I’m a sucker for clean art lines, what can I say.

Captain Marvel has been my favorite character of the Marvel Now era.  Add great story-telling, clean art and the return of a classic team make this book a recommended pick up. Marvel is making a big push towards empowered female characters and Captain Marvel is the poster child for this generation of super heroines and as the co-lead in Marvel’s current summer crossover event, Civil War II. Captain Marvel is smart, funny, strong and grounded. Hopefully, this character’s personality traits translate well in her future movie. When it does, I will be at the premiere wearing my Carol Corp t-shirt. 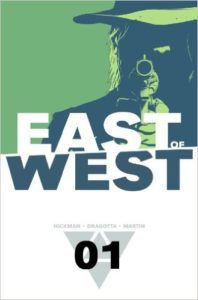 Imagine if the American Civil War never ended and to this very day, the fighting between the American Union and Confederate states raged on. Another dystopian mashup done incredibly well brought to us by the good people at Image comics. Saga brought us a sci-fi / fantasy mashup, Lazarus introduces us to a post apocalyptic future with a feudal twist and now East of West brings sci-fi to the old west (to be fair, East of West pre dates Lazarus by three years but you get the picture).  The apocalypse is here, the 4 four horsemen have arrived and our only hope is…..love.

East of West is set in present day America with a dystopian western sci-fi twist. The world is on the eve of the apocalypse and the four horseman are poised to usher in end times.  The world’s imminent doom is staved off only by the power of love, the sting of betrayal and the wrath of revenge. Death, while embarked on fulfilling his prophetic duty, falls in love and has son with the daughter of the Chinese Chairman and patriarchal leader, Mao Zedong. The other horsemen don’t approve of Death’s behavior one bit. Famine, War, and Pestilence betray death by capturing and enslaving Death’s baby’s momma,  killing the newborn (called “The Beast”)and then…. something happens that kills the horsemen. That “something” has yet to be explained at this point in the story,  but War, Famine and Pestilence are resurrected 10 years later as children – Death lives.

Nick Dragotta’s art and style is simply amazing. Feels like a steampunk version of The Good, The Bad and The Ugly….but you know, just good. The lines are clean (my favorite),  the characters look cool as hell and the colors contrast perfectly with the characters.

The characters have their own unique style, the settings look old west and worn and the vehicles are a nice blend of futuristic rugged western. Like the books mentioned in the intro of this review, East of West has a very unique style all of it’s own. The story and art are rich and layered. I highly recommend this book to anybody looking to try a story outside the big 2. You will not be disappointed. 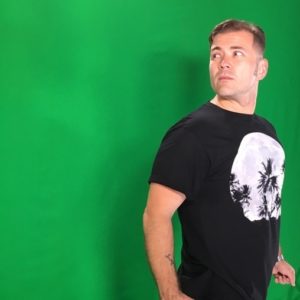