The Wrath of Con. (Not Such An Original Title, As It Turns Out)… 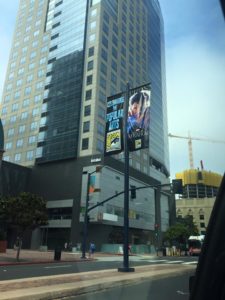 It’s been a few weeks now. A few weeks since San Diego’s population increased by several thousand; though in the heat of it all, it felt like several million. 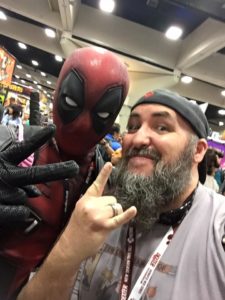 Still, that’s not to say that the San Diego Comic Con has done away with comics entirely, as a theme. But San Diego Comic Con has become more of a show that an actual comic book convention. The days of the San Diego Comic Convention being lined with comic book vendors is now over. Comic book vendors are squeezed into a very small area, taking up perhaps 5% of the Convention floor. The rest? It’s the Ritz and Blitz of of anything and everything else related to comic books; whether that’s enormous Marvel, DC and Image booths, with other companies such as Darkhorse and IDW among others, also having large booths, but no actual comics; just things to look at, and typically used as a stage to announce various comic book related shows, movies, DVDs, etc that are all coming out from said companies.

The artists are shoved, away from the comics and the major booths, into rows of tiny tables, that provide enough room – barely – for them to put their elbows on; and there’s so many tiny tables crammed together, that it’s insanely difficult to spot an artist you might be looking for.

And if you’re confined to staying in the Convention Center and not venturing into Downtown to hunt down your food; you’re limited to two food courts (maybe there was a third I am not aware of?). And seating? Yeah, you can forget about seating. At the food court downstairs, there’s about sixty tables 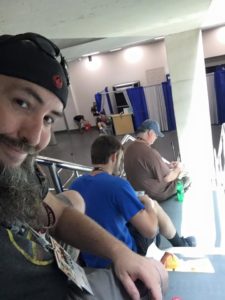 (and that’s perhaps being generous), and upstairs, there’s like ten tables. The problem is, a lot of people also used that as a place to rest. Because the other option was sitting upstairs, outside – and in San Diego, other than Saturday, the temperature was typically 95 to 98 degrees… which is pretty freaking hot. So, we had found a spot between the stairs (where people can’t walk), but – even the very, very, very nice Security Woman who came by and told us, “Look, I know you’re not blocking any traffic because people can’t walk here, but the security team has asked me to come down and tell you to move. I know, it’s stupid. But I am just doing my job.” We put up no fight, and relocated to stand by the doors and just stand and eat. 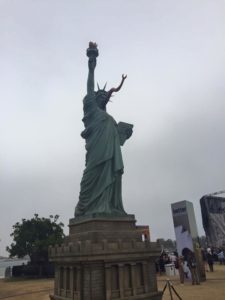 Now that the San Diego Comic Con has grown well beyond just the convention center, and now not only includes outside behind the convention center, the side area of the convention center, across the street of the convention center, and now into several hotels – it would be nice to see that inside the Convention Center if they made more of an effort to expand where people could sit to eat their (slightly) over priced hotdogs and pizzas that they buy in the Convention Center. Maybe even dedicating one of the Convention Halls as a place to eat and/or rest. I think this would alleviate some of the problems I felt were an issue; like resting against a wall, and having Security come by every 3 seconds telling us to move, or to stand closer to the pillars, so we’re not blocking foot traffic. While I completely understand that they’re doing their job, keeping areas clear in the event of some emergency; having a place to rest, that wasn’t outside in the blistering heat, would be nice. 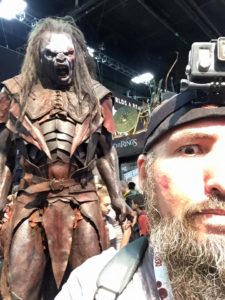 Now, while it certainly sounds like I did not have a good time; let me make it clear. I actually did. Surprisingly, I had a better day Saturday (which I have always viewed the “worse” day, because that’s when there seems to be the most people, so getting to anything seems literally impossible). But Saturday, other than that moment that the Suicide Squad cast came out at the DC booth, and the crowd imprisoned me between two immovable walls of people, with their arms up in their air, holding up their phones to record everything (and putting my nose at armpit level), I still managed to have a very good time Saturday. (Ironically, Sunday seemed to be more packed with people when it hit like 11am, to the point it became extremely difficult to move around, then having the Convention Security shouting in your ears, “Keep moving! Keep walking!” when you’re trying to do just that but can’t), was enough to shorten my stay on Sunday. 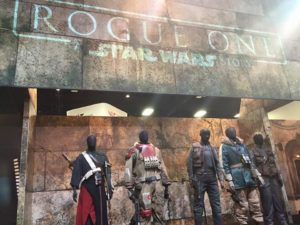 It was really cool on Saturday, seeing a bunch of cool Star Wars: Rogue One stuff… (there’s a lot more pictures on our Facebook page, see the link to the right and how to access the page!).

Also, while walking around, I took a quick tour through some of the Marvel booth (which was pretty packed with people, so it was a bit of a struggle to move), but I did manage to snap a photo with the Captain America shield, and also got to snap some photos of some action figures I am interested in being released… (Click the images for larger versions!) 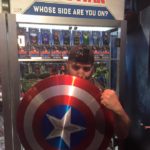 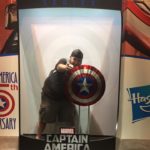 Who wants me as an Action Figure? 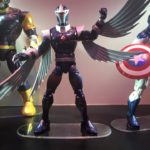 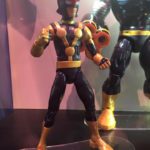 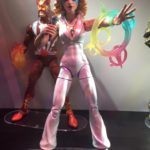 Amiee – do you want this? It’s even the Disco version of Dazzler! <3

And as luck would have it, I also managed to run into Colleen (Harley Quinn), Cindy (Poison Ivy) and Ace (Mrs. Freeze) doing their Rockabilly versions of these characters! (Click the images for larger versions!) 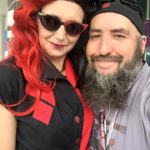 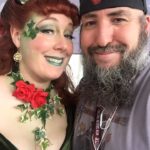 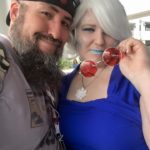 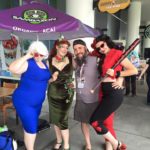