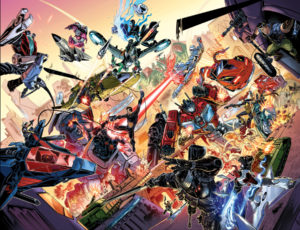 Image illustrated by Fico Ossio and colored by Diego Rodriguez.

Imagine a Universe that had G.I. Joe, Transformers, Micronauts, ROM, Action Man and M.A.S.K. (Mobile Armored Strike Kommand) all in the same shared universe. Now imagine a massive cross over event between all those titles?

Chris Ryall explains, “When I was bringing back ROM, the co-writer Christos Gage and I were talking about a nice way to make something big and impactful happen in that issue. So at the end of the issue there’s a big reveal that shows ROM might be a part of a larger universe than fans expected at the start. We were going to stealthily seed things along the way, so that fans would think these guys might exist in ROM’s world and then, in talking about it internally, it just made sense, now that we’re launching Micronauts and ROM, and we’ve already got G.I. Joe and Transformers, and were looking to do M.A.S.K. All these things should exist together. That’s what fans want to see.”

Revolution will be a five-part biweekly series that is launching in September, and will detail why all these characters are drawn together. The story will focus on “Ore 13” which is an unstable version of the Energone Cubes (which should be familiar to anyone and everyone who is a Transformers fan)!

While Revolution will bring all these characters together; it’s been made clear that after the events of Revolution all the books will “return to their corner” so that fans won’t need to keep buying books that constantly cross over. You may see characters, from time to time appear in another book, or might see them mentioned, or in the background, to show a unified universe, however.

You can look forward, to supposedly, Hasbro is looking to make a cinematic universe with G.I. Joe and ROM in the near future.