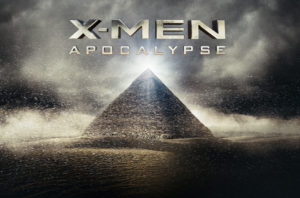 I will make every attempt to avoid (major spoilers) as much as possible. 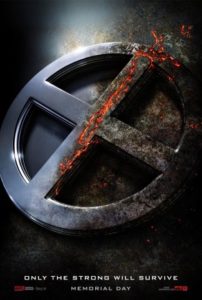 THE CLASS OF X-MEN.

So first, I was excited to see (yet another person) cast as Cyclops. It was also nice to see (another) good Jean Grey. Both of these actors did a great job with these characters; and I feel like they were really the defining characters in the movie (as they should be). I thoroughly enjoyed seeing Nightcrawler, who has long been a favorite of mine. While I didn’t care too much for his “appearance” – he was written well, and they did a lot of great things with his character. (And by appearance, I mean he looked too much like the cartoon version of himself from X-Men Evolution which I never, personally cared for). But the actor who played Nightcrawler did a wonderful job with the character. Beast has remained consistent from the previous movies, which was nice to see. And the actor (I’m horrible at names) who plays Charles Xavier continues to do a great job.

BRING ON THE HORSEMEN. 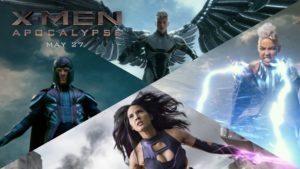 I don’t consider the following a spoiler, because you can see it in the trailer that Apocalypse has gathered Magneto, Angel, Storm and Psylocke as his “Horsemen.” And these are apparently the strongest mutants he could find. So first, let’s go with Magneto. He has started a new life, and things are going well for him. As you can guess, since you know he ends up as one of the Horsemen, that something is going to go wrong. Magneto, in this movie, shows he’s extremely powerful, especially after Apocalypse gives him a few pointers. So, Magneto, as a 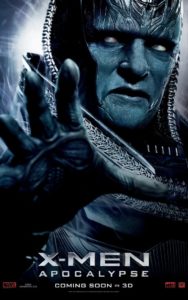 Horsemen makes sense. Next, we move to Angel, who as we see from the trailer, ends up getting his metallic wings. With his metallic wings, it makes sense that he’s a Horsemen (as he was also one in the comic, under the guise of Archangel). Next we go to Storm. Now, when we first see Storm, I actually really enjoyed her character. She was a thief, speaking to Apocalypse with an accent. Then, for whatever reason, just begins speaking English to him (even though he’s still speaking a foreign language – not sure why she just assumed he was American/British, but whatever). Now, that great start with Storm kind of tappers off – because when we see her use her powers, everything she throws a lightning bolt she grunts. Literally, every time. Like she’s throwing a softball as hard as she can. Okay, I get it for effect. Now, what I thought was an unfortunate missed opportunity is why didn’t Apocalypse show Storm her potential and have her create a massive raging storm that floods an area or something? That would have convinced the casual viewer that, “Yes, I can see why she’s one of the most powerful mutants and selected as one of Apocalypse’s Horsemen!” The last and final member of Apocalypse’s Horsemen? Psylocke. And without a doubt, the most disappointing character in the movie. Which is a complete and utter shame. Because Oliva Munn as Psylocke? Nails the appearance. She is exactly what I would envision a real life version of Psylocke to look like. 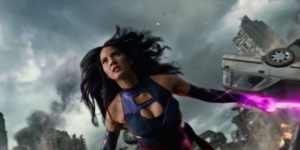 So why the disappointment? Well, other than a single line she has with Caliban and Apocalypse when we first see her, I can’t recall a single other line anywhere in the movie that she has. So this results in a very beautiful cardboard character running around the movie and doing cool moves and flips. But there was literally no attachment to the character. Because other than the (perfect) appearance, they could have replaced Psylocke with anyone else and it would have made no difference. So was utterly under utilized in this movie. But – with how the end the movie with her character, there’s hope that we might see Olivia Munn return and reprise her role as Psylocke (and hopefully redeem the character). As a character, with no development – Psylocke did have a bunch of cool moments – if you disregard what you know about her. For example, from the trailer, we see that she uses her “Psi-Blade” to cut a car in half. (So already we establish that it’s not a telepathic blade, that we know from the comics, but a physical manifestation of some kind). We see this again, when she uses it to stop her from falling, as well as when she fights Beast. The movie does away completely with her telepathic abilities (you know, her main power, where all her other sub powers derive from).

I admit. Part of the problem is I have seen Captain America: Civil War. I have seen how two teams of characters, clashing at one another, should be handled. I have seen how despite the large number of characters, how each character has a shining moment. I feel like the folks at FOX need to figure this out. And hammer their writers until we get an X-Men movie where all the characters have defining moments, that make us cheer, laugh, cry, or scream. This movie gives us a reason to understand Magneto. And it also did a wonderful job with Scott, Jean, and Nightcrawler. Mystique had a lot of cool moments, not being Mystique (as in not being blue). She ran around in her “Raven” form for about 90% of the movie (probably because the actress has made it clear she’s not a fan of the time consuming make up time to make her look like Mystique). So we only get to see Mystique as her blue self, a few scant times throughout the movie. (And not because she’s impersonating other people). 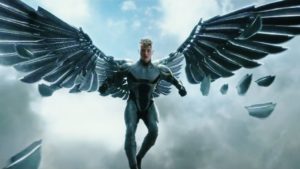 There’s also a few glaring errors that made me ask what they were doing. For example, pretty early in the movie, Nightcrawler and Angel are forced to fight in a cage. While it’s made clear that the cage is electrified, it never explains why Nightcrawler didn’t just teleport out of the cage – because he’s able to teleport while in the cage with no problem. There was also a scene where they find some flight suits – though, it serves absolutely no purpose (because the plane goes down moments later, so it’s not like these leather flight suits, similar to the look we see in the very first original X-Men movie served any purpose; this seems like it could have been cut from the movie). There’s also a scene, near the end where Magneto is “gathering” metal for an insanely long time; which seems completely pointless (since he really does nothing with it; and it’s not exactly clear what he’s going to do with it when he gets it). 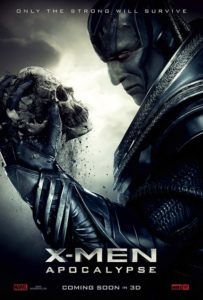 As I write this; I realize, this probably is the best X-Men movie to date, as others have said. Because, at long last, we have the X-Men fighting a real threat. In the end, I was entertained, which is all I really ask for. But the X-Men franchise still has not caught up to the Marvel/Disney MCU Universe. They’re not even close. A general feeling that the FOX Studios and writers don’t yet understand these characters. And all they keep giving us is this visually fun movie without a lot of content. It’s like buying a book that’s nothing more than a coloring book with lots of cool images, but no real story between the pages. But the ending of the movie gives me hope that they might be moving to a stronger direction. We see the characters, finally in somewhat familiar (variations) of the costumes we know from the comics. So, hopefully they’ve learned from seeing the success of the Disney/Marvel MCU movies, and the utterly successful Deadpool movie that it’s all right to put these characters in costumes. And the stinger at the end, gives me hope that things will not be so easy for the X-Men ahead, and that something sinister lingers in their future.

So all of that said – would I recommend seeing it in the theater? Yes. Because, I think, in the end, you may not love the movie, but you will probably be entertained by it.