I am surprised to announce that I enjoyed the heck out of X-Men: Apocalypse. Some of you may know that I ( like many of you, I am sure) have been very down on the X-Men movie franchise since X3. Growing up a reader of X-Books, it has been a sad journey from the somewhat decent X-Men and X-Men 2: Mutant Bugaloo, through the awful Wolverine: Origins movies and to the disappointing reboot/retcons; X-Men: First Class and Days of Future Past. But…. X-Men: Apocalypse surprised the heck out of me.

I am being compl 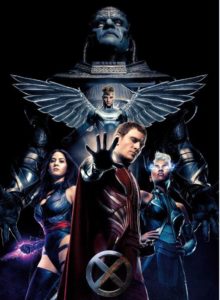 etely honest in saying that I was a part of the group of fans that expected this movie to be a steaming pile of X-Mess.  I didn’t like the last two reboot/retcon X-Men movies and came into this one with very low expectations. I figured Deadpool was an exception as Ryan Reynolds and crew were off the reservation with a low budget and a high risk. A unintended surprise for Fox studios from a movie that they probably had no real intention to integrate with the flagship X-Men movies.  Which may be why I was pleasantly surprised.  I was expecting to completely hate it. I was wrong. Very wrong.

I must warn you, dear reader, I have tried to keep spoilers out of the review as best as possible. Also, it is nearly impossible for me to talk about what X-Men Apocalypse got right without commenting on what they have gotten very wrong in the past. By past I mean X-Men: First Class, Days of Future Past and Deadpool. I am ignoring X1-X3 and the Wolverine Origins movies as they have been re-written out of movie canon. Please, allow me to vent.

What surprised me the most about X-Men: Apocalypse was that compared to First Class and Days of Future Past, this movie felt the most like a proper comic book adaptation. Admittedly, I was most looking forward to the return of Cyclops and Jean Grey to the X-Men franchise. The use of these two characters was going to either make or break the movie for me.  Tye Sheridan and Sophie Turner did not disappoint. Cyclops and Jean, the heart and soul of the X-Men, have been sorely missed. They made this movie feel like a true X-Men movie.  Focus (within the “reboot” films) has been misplaced on Wolverine, Xavier, Magneto and Mystique. I like Hugh Jackman, Jennifer Lawrence, James Mcavoy, and Michael Fassbend 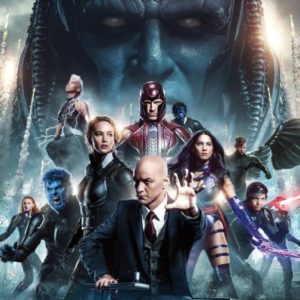 er, but to me, they do not make an interesting core X-Men team.  X-Men: First Class was an Xavier/Magneto movie, also starring a few other mutants that get done away with. X-Men: Days of Future Past was a Wolverine and Mystique movie, also starring a bunch of other mutants that get done away with. I recognize that that is a great generalization but my argument stands that the recent X-Men movies have been focusing on the wrong characters and have killed off many other potentially great ones.  While X-Men: Apocalypse did star Lawrence, Mcavoy and Fassbender, this movie really allowed the supporting cast to hold their own.  This review will focus mostly on the supporting cast members and less on the big name stars as that is where I think this movie shined the brightest. I’m sure the big names are getting their proper coverage by other media anyway.

Evan Peters’ return as Quicksilver did not disappoint. He played a bigger role in this film as opposed to his glorified cameo in Days of Future past. His character’s personality was 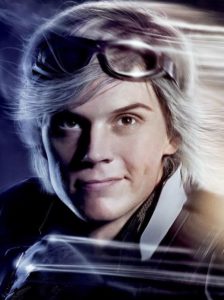 allowed to shine bringing humor, excitement and depth to the team, a feat that was not matched by his MCU counterpart.  The audience got their second epic “Quicksequence” as expected. The sequence, much like Peters, did not disappoint.  Quicksilvers sequences are quickly becoming a welcome staple in the X-Men movies and rightfully so because they are fun unique and demonstrate Quicksilver’s powers in a very cool way that set him apart from the other mutants.

Nicholas Hoult comes back for a third time as Hank McCoy, The Beast. One of the original X-Men, Beast is now a seasoned X-Man and a pillar of the team. He is still Xavier’s right hand man and the brains behind all of the X-Men’s cool tech including Cerebro and the Blackbird.  Hoult plays McCoy perfectly as a nerdy lab tech and brings him to feral life when in full beast mode.

Lucas Till once again wreaks Havok as Alex Summers. Growing up an X-Factor reader, Havok was one of my favorite team leaders. He had a great costume, great power set, and a cool look overall. I absolutely HATED how they used his powers in X-Men: The First Class. His hula hoop blast was cringey at best. The chest 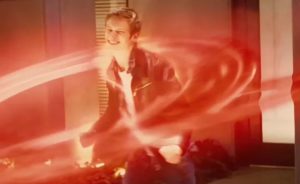 piece was unnecessary and fired a straight red beam of energy instead of his unique white plasma cones. I know this may sound like nerdy nitpicking but I honestly feel like the writers said, “He’s cyclops’ brother, right? Well just make his powers look exactly like cyclops’ blast coming out of his chest. Make it red, even.”  Well, unfortunately Havok’s powers still look the same, but thankfully he can emanate plasma blasts without doing the hula hoop dance or using the chest piece from X-Men: The First Class.

The Not New Yet All Different X-Men:

Now for the fun part. X-Men: Apocalypse did quick work to recast familiar roles after the Days of Future Past retcon. We welcome the return of an All Young All Different Cyclops, Jean Grey, Storm, Nightcrawler and Angel. This film is one Iceman away from comic X-Men “first class” team. So close.

I liked James Marsden and Famke Janssen as Scott and Jean in the original X-Men movies. I thought they portrayed the characters well and although the writing of those characters left a lot to be disappointed about, the problems were not with the actors. Tye

Sheridan and Sophie Turner as a younger Scott and Jean are pretty damn good as well. Cyclops powers still feel raw and unwieldy when unleashed.  I have always appreciated Bryan Singer’s take on Cyclops’ blast. It feels like Scott unleashes a fire hydrant of plasma energy instead of the traditional laser beam of the comics. One of the few instances where the movie power is portrayed better than in the comic.  Sophie Turner’s Jean Grey is young and somewhat angsty. She may look like the girl next door, but there is a bit more mean girl than previously portrayed in the comics, movies and animated series. I like it. I like Jean. That’s all I have to say about that.

Alexandra Shipp takes over for Halle Berry as Storm and does a damn good job. 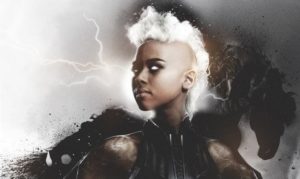 Halle had the look but lacked the writing to give us a true portrayal of a weather goddess. Honestly, she never lived down the cringey “toad beingstruck by lightning” bit from the 2000 X-Men movie. Sorry Halle, not your fault.  Shipp speaks with an accent, rocks the classic 80’s punk hawk that Ororo Monroe was known to rock and throws lightning like a badass. I am excited for the future of this All New All Different Storm.

Nightcrawler, for the longest t 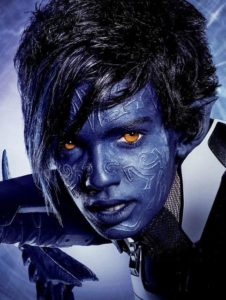 ime, was my high water mark for how X-Men characters should be portrayed. Alan Cumming was perfect as the teleporting mutant Demon Priest, Kurt Wagner. So this new nightcrawler had BIG shoes to fill. So….Who is Kodi Smit-Mcphee and where did he come from? Kodi brings us the childlike naivety of Nightcrawler more akin to the animated series, X-Men: Evolution. Kurt Wagner is young, full of wonder and a lot of fun to watch on screen. Kodi successfully makes the demon Nightcrawler look like a bright eyed happy child. His action scenes are as amazing as Alan Cumming’s Nightcrawler scenes in X2. Nightcrawler was a pleasant surprise. I am a fan of Kodi Smit-Mcphee.

We finally have an Archangel, although not blue like in the comic book 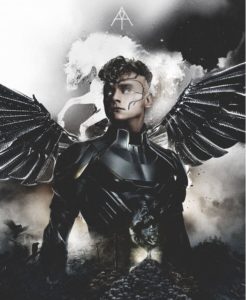 s, but a damn good Archangel none the less. Ben Hardy’s take on Warren Worthington III is perhaps the most different and surprising of the revised characters. Angel is more Billy Idol than privileged rich kid in X-Men: Apocalypse and it works really well. His feathered winged action scenes were just as awesome as his metal ones.  I personally never expected a punk rock take on Angel but like many of the characters mentioned before, was pleasantly surprised.

Olivia Munn as Psylocke suffered from what the other movies did to great supporting characters; gave them very little to do. She was grossly underused. Psylocke had some pretty satisfying fight s 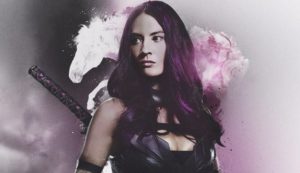 cenes but said very little. I only hope that this isn’t the last we see of her in X-Films. What they did get right is the costume. They absolutely nailed a true to life comic version of her blue bikini outfit. She is one of the few X-Men characters that has had an MCU level adaptation of their costume on the big screen. For the Fox studio movie lineup, only Deadpool, Colossus and Psylocke have comic accurate looks. Just 3, people. Step it up, Fox.

The Age of Apocalypse:

I am of the belief that superheroes are only as good as their adversaries. The villains of X-Men: The First Class and Days of Future Past were not very strong or clear. Kevin Bacon as Sebastian Shaw and Peter Dinklage as Bolivar Trask are exceptional actors portraying mediocre villains. Perhaps mediocre is too strong of a word. They are mastermind level villains much like William Stryker was in the original X-Men movies. Brilliant minds with complex approaches but not adversaries that can be fought, like Magneto and the Brotherhood of Mutants. Enter Apocalypse.  Oscar Isaac is powerful and stoic in his portrayal of the first mutant, En Saba Nur. 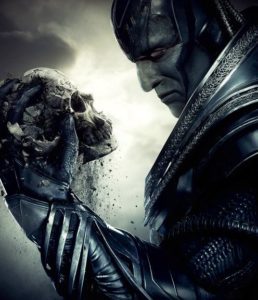 Apocalypse physical appearance was a major concern for many fans, I admit that I was a bit underwhelmed by early images of the mutant Apocalypse but after watching the movie I was not completely disappointed. Do I wish Singer would have used a more classic look for Apocalypse? Yes, of course but Apocalypse’s appearance bothered me a lot less than I expected throughout the film.  I had a bigger problem with Bryan Singer’s insistence on showing Apocalypse walking around like a common person. I felt that he could have been a bit more menacing and felt more powerful if they hid him a bit more or kept him behind his cloak a bit and instead gave the audience a full reveal towards the end of the movie. Instead he walks around in broad daylight interacting with people. The boss fight would have had more impact had Singer handled him a bit more like the MCU’s Thanos instead of like original X-Men’s Magneto. A minor misstep but not a deal breaker for me.  What was important was that he did come off as a powerful mutant. His intentions to rid the world of the weak were clear and he was a big enough threat that he and his 4 Horsemen required the entire X-Men teams efforts to combat him.
X-Men: Apocalypse has it’s problems, the writing is a little clunky in spots, the usual X-Men tropes are present and accounted for but the faults were not enough for me to dislike it. I really hope they continue with the core team of Cyclops, Jean Grey, Beast, Storm Quicksilver and add Angel, Psylocke Colossus and Negasonic Teenage Warhead to future X-Men movies. If they are smart they’ll start crossing members of this team over into future X-Men team and solo movies as well.

Deadpool and X-Men: Apocalypse have restored my faith (slightly) in the X-Men franchise.

This entry was posted in Review. Bookmark the permalink.