DO NOT READ IF YOU DO NOT WANT SPOILERS ABOUT THE NEW CAPTAIN AMERICA: STEVE ROGERS COMIC… 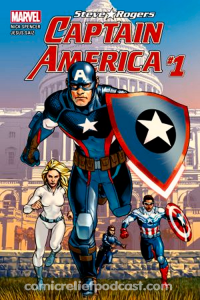 It’s now been revealed – and I caution you to STOP READING IF YOU DO NOT WANT SPOILERS that as it turns out – everything you know about Steve Rogers fighting those blasted Hydra agents was all “a lie.” That’s right – guess what? You know that wonderful, patriotic, good boy that Captain America was known for? It’s all a “lie.” Because, as it turns out, all this time that he’s been around, he’s actually been working for those crazy kids of Hydra. 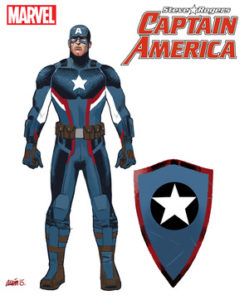 Now, Marvel is claiming this isn’t a “gimmick” – but, I can’t help but feel like it is. To me, it seems like they’re looking desperately to shake things up and land themselves in the news, and try to feed the “collector’s market” with the idea that this issue will be a big deal – and that way, tons of people, who may not be comic collectors, will go and get this issue to check it out (and probably store right next to their “Death of Superman” comic that they were certain would allow them to retire a millionaire after a few years). The problem there is – if everyone picks up a copy, then there’s very little supply and demand later, because everyone has a copy. What makes a comic “valuable” many, many, many, many years later is the fact that something major happened and the fact that the comic is scarce. So all you “would be hopefuls” that want to retire with the “value” of your comic collection – you may want to call your boss back and ask if you can have your job back. 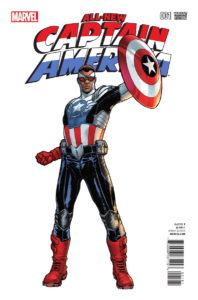 IT’S NOT A GIMMICK.

Marvel, as I said, claims that this isn’t a gimmick. That this is a ground breaking event that will shake the entire Marvel Universe to its core. If you can’t tell by the general tone of my article – I am extremely dubious. Only because history has repeated itself too many times. Remember when Captain America died after surrendering in the original events of Civil War? Remember how Marvel said he was dead? Remember how he came back? Remember back when Captain America’s super soldier serum was beginning to be depleted from his body and he began to age and get old and they brought in a new Captain America? Remember how that got reversed and he came back again? I mean, I could keep grabbing examples – and those are just Captain America. You take a look at the Marvel Universe (or any comic book Universe) as a whole – and you will see everything is undone.

I predict that Captain America will remain an Agent of Hydra for a few years; maybe five, at the most. (I don’t even think it will go that long). And it will get undone by the fact that – “Hold on! Turns out Captain America wasn’t a member of Hydra all this time! He was just brain washed into thinking he was!” Not that they’ve done anything similar like that before in Captain America. (No, I’m not looking at you Winter Soldier… I mean, Bucky…) 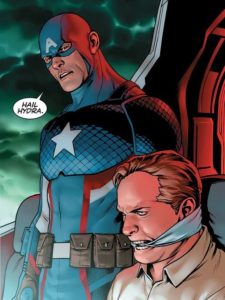 Now, as someone who has collected comics, probably longer than most of you have been alive… I am overjoyed at the fact that I get to see a lot of these comic book heroes being done so beautifully and amazingly on the big screen. (Who would have thought I’d ever see Ant-Man as a movie? And a damn good movie?) So, to me – it’s an odd move, to do something in the comic that contrasts the movie so completely. I agree (and am thankful) that the comics and movies aren’t exact copies of one another – but for that person, especially a kid, who saw the hugely successful Captain America: Civil War movie that literally just came out two weeks ago – and sees Captain America as this honest, true to America type hero – and then picks up this issue, because it’s a #1 – and reads that, no, Captain America isn’t the hero you know from the movie – he’s actually been playing the heroes for fools and working for Hydra all this time – that… that just seems like a bad move to me.

But, hey. What do I know? I just do a podcast with a few scant followers. I don’t own and run a multi-million dollar industry, so I probably don’t know what I am talking about.