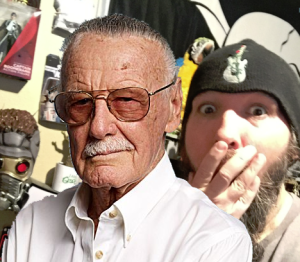 So I finally got approval to get this posted! Ladies and gentlemen, I want to share with you the one on one I had with Stan “The Man” Lee!

Comic Relief Podcast: What’s it like being Stan “The Man” Lee?

Stan Lee: Well, I get up every day, just like you do. Put one leg in my pants at a time.

Comic Relief Podcast: Do you ever tire of people asking you the same questions?

Stan Lee: I never talk comics when I do interviews! I can’t wait to see what you ask me!

Comic Relief Podcast: Always a comedian! So when you’re at conventions, people must flock to you and bombard the comic book icon with a million questions! Do you ever feel overwhelmed?

Stan Lee: I don’t. The thing is, I used to think what I did was not very important. People are building bridges and engaging in medical research and here I was doing stories about fictional people who do extraordinary, crazy things and wear costumes. But I suppose I have come to realize that entertainment is not easily dismissed. Beyond the meaning (of a work of art), it is important to people. Without it, lives can be dull. Singing a song, playing sports — anything that entertains, that takes people away from their own problems, is good. Sounds obvious, but it’s good to be reminded. I’m much happier now that I feel that way.

Comic Relief Podcast: You’re responsible for a laundry list of characters in the Marvel Universe. Is there a trick to coming up with them or their names?

Stan Lee: There was no trick. I would sit and think. It was never easy, though. Spider-Man, I wanted someone with the power of an insect, who could crawl on walls and stick to the ceiling and you wouldn’t know he was there. But Insect Man? Mosquito Man? None sounded right. Then I hit on “spider,” which sounded dramatic.

Comic Relief Podcast: How was it working on Spider-Man?

Stan Lee: First, I told Jack “The King” Kirby about it… but, Jack made him look very heroic and strong. But that isn’t the way I wanted him. I wanted him to look like a typical, thin high school kid. And he doesn’t get all the girls because of his athletic prowess. He’s just kind of a shy high school kid who’s a science major. It was no big deal. I said, “Jack, forget it. I’ll give it to someone else.” And he was busy with a dozen other books. He didn’t care. So I called Steve Ditko, and Steve gave him just the right look. And that’s how Spidey was born.

Comic Relief Podcast: I know you’re extremely busy – so I will cut this short. But since you created so many characters and have done so many things – is there one day, one event in particular that sticks out in your mind above the rest?

Comic Relief Podcast: Because you spoke with us?

Stan Lee: No, because today’s April 1st, and I wonder how many people are going to believe that this really happened?