Bedlam in Troubletown by Chad Cavanaugh 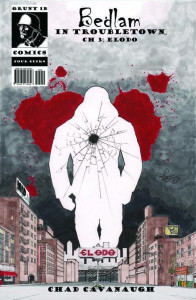 Bedlam In Troubletown is the second title released by creator Chad Cavanaugh and Grunt 1B Comics.  Grunt 1B’s sophomore release maintains a similar black and white format to his ongoing series, The Map. Artistically these books may appear alike, but the style and feel are worlds apart.  While The Map is a post apocalyptic tale of survival set in the barren desert of New Mexico, Bedlam In Troubletown introduces us to the sprawling city of Troubeburgh.  A dark city riddled with crime, greed and corruption.

The reader is immediately introduced to the protagonist Danny, a man marked for death and on the run. Danny’s days and night are spent looking over his shoulders for hitmen sent by the corrupt Paolo Verducci.  Danny is more than capable of handling himself and seems almost at home in this environment if it were not for one little detail; a young daughter to whom he has to protect.

Bedlam In Troubletown is a fast paced comic noir story replete with action and the grit of a 1970’s detective television series.  Follow Danny as he hunts down the criminals responsible for the city’s corruption and survives the onslaught of triggermen all while being a father and protector.  Crime, corruption, anarchy…business as usual in Troubletown.