It was the best of times, it was the worse of times.

A Tale of Two Comic Giants.

The 1990’s of the Comic Book era. In hindsight, when a lot of folks look back at how comics were – some remember those days fondly, while others shudder, shake, laugh, and blame the 90’s during the comic book craze, for the near collapse of the Comic Book Industry. There is, in my opinion, no one single thing to blame. It was an era of over the top characters, more variant covers of the same comic than you could shake a buck at, tin covers, golden covers, 3D hologram covers, six page fold over covers… You name, and the 1990’s did it – to the… X-Treme… if you will. (Maico will get that reference…) 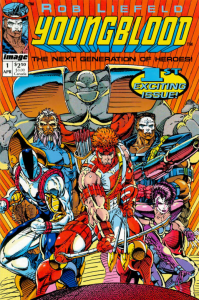 Rob Liefeld launched Youngblood. While he had often been criticized for his artistic ability, Youngblood was a huge success, as comic book fans jumped at the chance to get “the next big thing.” People can say what they will about Youngblood and Rob Liefeld, but when this comic came out, it was the highest independent comic book ever published. Those sales had to come from somewhere. I am sure, people out there, like myself back then, bought several copies banking that all these new Image Comics would one day be worth what Avengers, Uncanny X-Men and Fantastic Four #1 are all worth. But still, it ranked in a lot of money for being an independent comic.

The next comic I remember reading from Image Comics was a fun, smash’em up, kind of comic – it reminded me 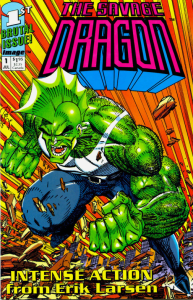 very much of “What if Hulk had been a cop and was intelligent, funny and pretty kick @$$?” That was Erik Larsen’s Savage Dragon. I remember talking to other comic book geeks about Savage Dragon, and the general feeling was that the comic book was very well loved. Savage Dragon had a different feel than Erik’s Amazing Spider-Man, and felt more aggressive. It still had that spunk that Peter Parker is known for. It was (well, is, as I believe the comic is still going and still done by Erik, himself!) a fun comic that found it’s footing and found that balance of being a smash’em up, with some story, and yet didn’t seem to take itself too seriously at the same time, and acknowledge that. 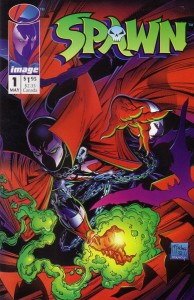 Next comes Spawn. My biggest memory – even today – is Spawn’s cloak. That thing just seemed to be everywhere and criss-crossed over panel lines and everything! Back then, Spawn had reminded me very much of Ghost Rider (more specifically Spirits of Vengeance) which I was really into. Someone who “gives ups their soul” (essentially, though in Spawn, if I remember correctly, he actually dies and comes back from Hell? Man, I need to go back and re-read these!) The chain that Spawn had only helped me to think of Ghost Rider. But really, that’s where the similarities stopped. In the case of Spawn, not only had he died, but he was completely disfigured, and had left behind a wife and child that he had tried to visit. Spawn, like Savage Dragon, is still being published currently (if I remember correctly). And that’s a pretty impressive feat! 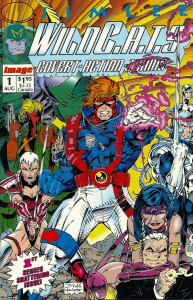 Next came the comic that was my jam – WildC.A.T.S. This comic was my “X-Men” originally, when I picked it up. With characters like Spartan (the Cyclops of the team), Grifter (the Gambit of the team), Maul (the Colossus of the team), Warblade (the Wolverine of the team), Zealot (was the Psylocke of the team), and Voodoo – well, she was a stripper turned hero, she didn’t need to be related to any X-Men character, she was easy on the eyes, to my young, impressionable brain. Jim Lee was one of my favorite comic book artists “back in the day” (he’s still a fantastic artist!), and I loved his WildCATS – but what could make that even better? The fact that he and Marc Silvestri, another one of my favorites, worked closely together in merging WildCATS with what would become my favorite Image Comics back then – Cyberforce. 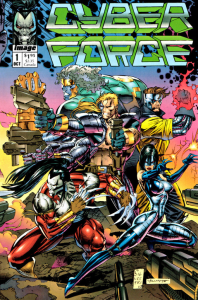 Cyberforce also reminded me of X-Men back then; with Ripclaw reminding me of Wolverine, Cyblade reminded me of Psylocke (in so many ways), Heatwave reminded me of Havok, and Impact was Colossus. Stryker was absolutely unique to me – not only did he have extra (metal!) arms; but they weren’t even even! He had three arms on one side, and one on the other! The cross over between WildCATS and Cyberforce featuring Ripclaw and Warblade with Misery (whose design I loved), was the stuff dreams were made of back then! Cyberforce also spun into a new series, with Stryker in it called Stryke Force, and that was an absolutely fun series to read. 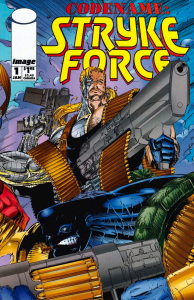 Stryke Force was a fun read, especially when it came to reading about Anvil who was ultra dense (not as in stupid, but dense like an actual anvil; though some of his team members may have thought he was also dense, as in stupid as well). 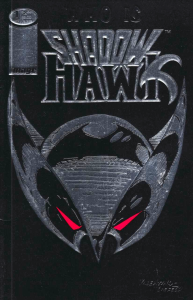 But taking a step back, because I got caught up in how so many of these comics were connected, despite the founders of Image Comics, saying that they had their own unique universe. Another title that came out from Image Comics in the beginning was Shadowhawk. This is a comic, to me, that was way ahead of it’s time. Sure, we look on the outside of the story as a traditional hero acting like a vigilante. If you look deeper, the character focuses on Paul Johnstone, who grew up in a bad neighborhood, who did some minor theft but with guidance would eventually become a lawyer, and even a district attorney. When some gangsters leverage his brother to try and free some of their members, Paul Johnstone is injected with HIV Blood. HIV. We’re talking AIDS. And we’re talking in the 1990’s when most people were so terrified of the word HIV or AIDS. To have your main character suffering with that? Bold move. And the reason I think this comic did not, unfortunately, sell as well as it should have, because people didn’t want to read something a little too close to “realism.” 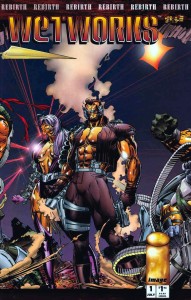 Another book from one of the founders was Wetworks. Sadly, as much as I love Whilce (he’s one of the nicest guys you can possibly meet; every year I see him at the Con, he’s always up for talking, photos, autographs!), but what I remember most about Wetworks was a delay. I remember I bought the first issue, and didn’t see the second issue come out for awhile, and suddenly one day I look and issue 3 is out, and I am frantically looking for issue 2. Despite that, it’s really difficult to beat Whilce Portacio’s art, and even the colors in these comics were so amazing (they really made that gold, look like gold!) 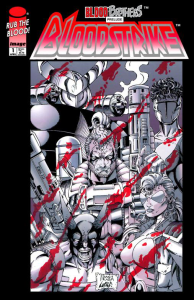 I remember a flood of titles in the 90’s being produced by Image Comics (just to name a few), The Maxx, Pit, Gen 13, The Darkness, Supreme, Freak Force, Stormwatch, Deathblow, Brigade, Bloodstrike, Ripclaw (Solo Series), Killrazor (one shot), Team Youngblood, Hellshock, Regulators, Battlestone, Badrock, New Men, among many others!

In hindsight, some of those titles, may be difficult to get through; the art, in many cases, was pretty amazing; but Image Comics back then, focused on art (in many cases) over writers and stories (rather than trying to find a happy marriage of both).

Today? Image Comics is now a powerhouse in the comic industry. For example, there’s this comic they publish – you might have heard of a television show based on it? – called The Walking Dead. Today, Image Comics is about diversity. And I don’t mean about having stories about a specific race, religion, or anything like that (though they have that as well). What I mean is – you can’t call Image Comics a “super hero” comic company, because that would be like saying 3.14 is the only numbers of pi. (Did I really just make a Math reference? What is wrong with me!) Image Comics has diversity, as in what kind of stories you’d find published. Whether it’s zombies (The Walking Dead), super heroes (Savage Dragon, Spawn), science fiction (Saga), and – well, let’s just say Image Comics has grown quite a bit since they first formed. They’ve done some insanely impressive things in the comic book industry.

Happy Birthday, Image Comics. Thank you for everything you’ve done and for the memories you’ve created.