ROM (Colored) and a note about Bill Mantlo 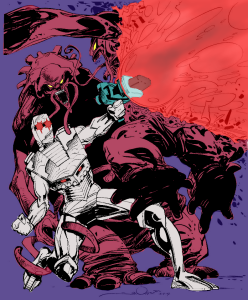 I’ve always enjoyed the early issues of ROM. Wasn’t until the last few years, that I actually went back and recollected the entire run of ROM comics (having sold them many, many, many years ago so I could afford moving from one state to another). I took this B&W ROM image that was posted and colored it, giving ROM a sort of silverish (my attempt at looking metallic) look, and giving his mortal enemies – the Dire Wraith, their deep, blood red like color. Shame that Marvel no longer has the rights to ROM (IDW recently gained the rights after many years of ROM being in Limbo). Curious to see what IDW will bring to the table in ROM, since there’s elements that remained copyrighted to Marvel (essentially everything that wasn’t ROM specifically). So for example, the Dire Wraith are copyright to Marvel still. IDW also got the rights to Micronauts which was also contracted by Marvel to do (ironically both written originally by Bill Mantlo).

If you don’t know about Bill Mantlo, let me share this:

On July 17, 1992, Mantlo was struck by a car while rollerblading. The driver of the car fled the scene and was never identified. Mantlo suffered severe head trauma. His activities of daily living are severely curtailed and he resides in a healthcare facility where he receives full-time care.

Mantlo’s brother describes the injury; “Bill is, and has been, trapped in a world of confusion and despair since his accident. The cognitive deficits he suffered have left him unable to reason or understand his situation, and he struggles daily to maintain any control over his own mind. For someone with his intellect and imagination, this was the absolute worst type of injury that could ever have happened to him.”

In 2007, Yurkovich released the benefit book Mantlo: A Life in Comics, with all proceeds from the book donated to Mantlo’s brother and caregiver, Michael Mantlo, to help toward the costs of maintaining Mantlo’s care. In addition, on Dece

In 2014, Mantlo was granted a private preview screening by Marvel Entertainment and Walt Disney Pictures of the critically acclaimed and successful Marvel Cinematic Universe film, Guardians of the Galaxy, which prominently features his creation, Rocket Raccoon, as a principal character. According to his brother, Michael Mantlo, Bill was pleased with the adaptation (which credits him by name as the character’s co-creator) and considered the occasion a happy day for himself and his family.

The photo is of Bill Mantlo and his sister-in-law Liz, August 10, 2013. Courtesy of Bill’s brother Mike Mantlo.