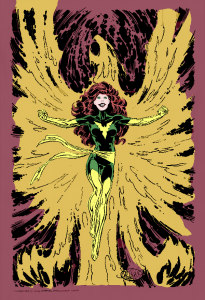 So when I initially colored this B&W image, I thought about how Jean Grey emerged from the lake after the plane crash, with the Phoenix Force all around her. (Many, many, many years later, the story would be retold that she was cocooned at the bottom of the lake, and that it wasn’t Jean who surfaced from the lake, but rather the Phoenix Force itself, taking on her appearance and personality, when X-Factor was launched). An 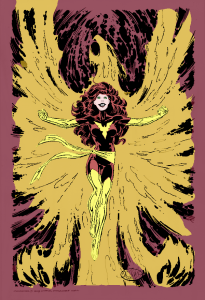 yway – all of that aside, I initially colored this as Jean Grey – with her classic green and yellow/gold type costume. However, my favorite costume of Jean Grey (and perhaps the only time I ever even liked Jean Grey was when she was in her Dark Phoenix persona). So this led to me doing a version of this photo where Jean Grey is in the Dark Phoenix costume, which is that more reddish and yellow/goldish costume.

Which was your favorite version of Jean Grey? Come by our Facebook or Twitter and let us know!