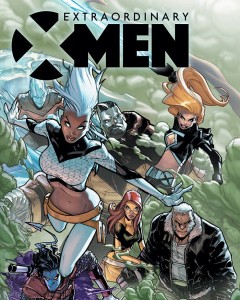 Something I’d like to begin doing is taking more advantage of our site, and begin doing write ups on various news in the comic book world (whether it’s about comics, movies, television shows – anything that relates to comics). So, I figured I’d begin with something that was just announced. Extraordinary X-Men.

The team will consist of Storm, who is taking leadership since Cyclops has vanished. Along for the ride is Colossus, Magik, Iceman, Nightcrawler – along with time displaced Jean Grey (from All New X-Men) and Old Man Logan.

The title will be written by Jeff Lemire (Animal Man, Justice League United) with art by Humberto Ramos (Amazing Spider-Man). The only clue Jeff is giving is that the story will focus on these characters – and the first arc has a lot to do with the missing mutants and how it’s involved with the Inhumans. 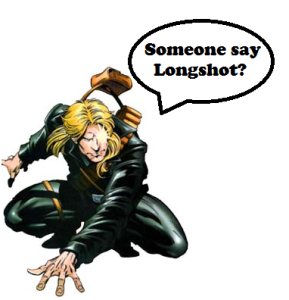 My Theory: With the movie rights being what they are (Sony with Spider-Man and FOX with anything that’s mutant related), I have long believed that Marvel would be “rebooting” the Marvel Universe and reveal that mutants are actually directly tied to Inhumans; and that possibly mutants cease to exist and turn out to be Inhumans – thus, in the movie world, eventually making everything fall back to Marvel’s rights to own movie characters such as Wolverine, Gambit, Deadpool and the rest of The X-Men. Seems like a long shot, but certainly also seems like something a corporation would do to regain the rights to what was (once?) one of their major money factors (The X-Men).

What are your thoughts on this team? Does this appeal to you? Sound off on our Facebook page or let us know on Twitter.