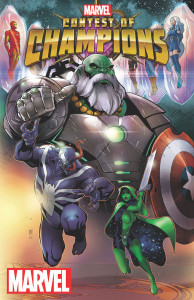 Spinning from Marvel’s Secret Wars event, there will be a new series entitled Contest of Champions. It will be written by Al Ewing (Judge Dredd,  Loki: Agent of Asgard) and Paco Medina (Nova). The series will be based off the mobile game, by the same name, from Kabam! The game will be a part of the post Secret Wars continuity, where heroes and villains alike will be pitted against one another to fight.

The cover features the Future Imperfect version of a future Hulk known as Maestro. It also features Gamora (with what appears to be her new look and powers post Black Vortex) along with a version of Venom. Other characters can be seen “floating” in the background within crystals. It’s unclear if Maestro, who Marvel says is here to stay post Secret Wars will be the one in charge of the Contest of Champions or if he’s just on this cover (and perhaps the first story arc). They also discussed that this series will be used to introduce brand new characters to Marvel that will also become part of the Contest of Champions game, such as Guillotine. 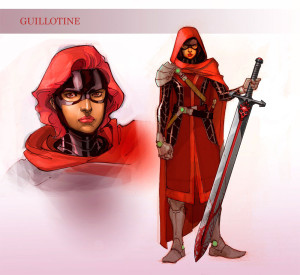 CBR reports that Guillotine as: a character possessed of a magic sword that dates back to the French Revolution, who was created as part of a collaboration between “Contest of Champions’ developer Kabam and Marvel artists.

The two teams were made from mortals on Earth (who knows why Earthlings are constantly used as pawns!) 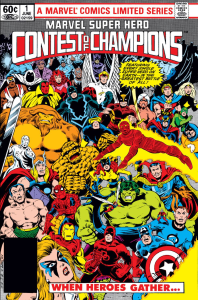 If some of those names don’t sound familiar, that’s because Blitzkrieg (Germany); Collective Man (China); Defensor (Argentina); Peregrine (France); Shamrock (Ireland); and Talisman (Australia) debuted in the series. Most of these characters hardly appeared since.

The second Contest of Champions called Contest of Champions II is a sequel in name, alone, and has nothing to do with the previous story. Despite being written by the magnificent writer, Chris Claremont – the story was weak (Brood trick heroes to fight one another, with the idea that the Brood Queen will infect the winners with a Brood Egg to invade Earth). The Brood Queen, using Rogue is defeated by Hawkeye and Iron Man (along with some of the other losers from the contest) and Ms. Marvel (Carol Danvers at the time), convinces the Brood Queen to leave Rogue’s body or she will kill Rogue.

We shall see what this “third” installment of Contest of Champions yields; especially being based off the mobile game.