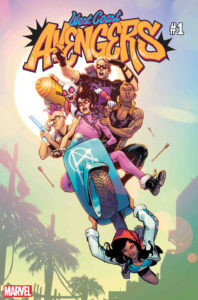 Well, first let me disclose – I am happy for those that will enjoy this version of the West Coast Avengers. So before I go too deep into my thoughts about it, let’s go over this version.

First, it will be written by Kelly Thompson – who has written Hawkeye, Rogue & Gambit, and quite a few other books. The art duties will fall on Stefano Caselli.

So let’s talk about the cast. First, we have Clint Barton (the original Hawkeye) who will probably be the leader of the team. Then there’s Hawkeye 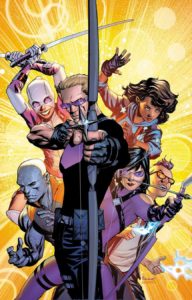 (Kate Bishop). Kate’s boyfriend, who I believe goes by the name Fuse. Joining them is Gwenpool, along with Quentin Quire (from the pages of the X-Men) better known as Kid Omega. And then rounding up the group is America Chavez, who I think just goes by the name America. The first issue comes out Wednesday, August 22.

Now, it might be me and my idea of continuity, that Marvel seems to have no problem forgetting. But in the piece on Marvel’s site, they said: 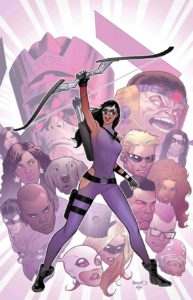 Now. Wait a minute. Why does this sound very familiar? Oh, that’s right. The New Warriors did this before! Which led to Marvel’s event Civil War, in which over 600 children (as well as several members of the New Warriors; including Night Thrasher, Namorita, and Microbe) were killed when Nitro ignited himself.

So now, these superheroes are going to do the same thing? Film a reality show? And not consider the similar consequences, that in terms of the Marvel timeline was not that long ago? (I would love to see a story where the New Warriors face off against the West Coast Avengers to tell them what a bad idea this is). 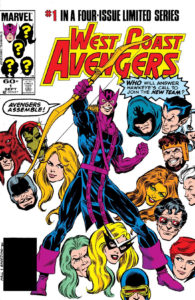 I was a huge fan of the original West Coast Avengers run, because I loved all of the characters that were on the team from my long history of reading Avengers (beginning with Avengers #159). My problem with this version is; other than Hawkeye (Clint), I am not familiar with the rest of the members (I know of them all, except for Fuse – who I know nothing about), but couldn’t tell anything about their stories, origins, or anything. And the idea that they’re doing a reality show, similar to what the New Warriors did, without considering the fresh wound that should have, admittedly bothers me. You’d think the super hero community would be like, “Whoa! Stop. This is not a good 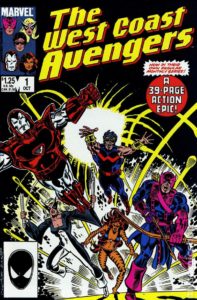 idea. Remember when the New Warriors did it and all those people died?” And maybe there will be some super hero opposition; especially if it’s the New Warriors, I’d pick up those issues for sure.

What are your thoughts about this West Coast Avengers – you excited about the characters they have selected? Let us know on Facebook or Twitter! We’d love to hear your thoughts, whether you disagree or agree!