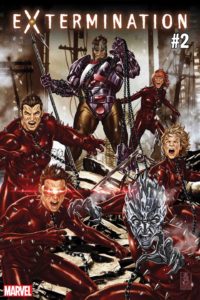 First, I must congratulate the X-Offices for not making this X-Men: X-Termination.

That alone deserves quite a bit of an applause; because that just seems like that would have been the easy answer to call this book. (And did anyone else, besides me, think that was Rachel Summers next to Ahab? So, now rather than young Jean Grey imitating – poorly, I might add – the original Jean Grey, now she’s going to be imitating Rachel Summers/Grey.

Apparently red headed mutants don’t know how to have any original ideas.

But, let’s dig into what this will be about… From writer Ed Brisson himself:

Ed Brisson: This series is about the Original Five—Jean, Bobby, Warren, Hank and Scott. Years ago, they were brought from the past to our present so that they could see how badly things went wrong with their older selves and, theoretically, fix it. They were only meant to be here briefly, but have stuck around for far, far too long and their presence is finally going to have some very serious consequences—not just for themselves and the X-Men, but for all of mutantkind. If the X-Men are here, then they’re not where they’re supposed to be, fighting those they’re supposed to fight. What happens when that past starts to unravel? What’s the butterfly effect on our present? 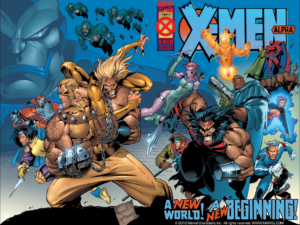 Now… I don’t know how time lines work, but I’ve argued for quite some time, that the moment Hank yanked out the “616” versions of themselves; their adult selves should have either ceased to exist or been drastically changed. For example, when the time displaced Angel got his energy wings; how did “616” Archangel not suddenly sprout energy wings also, rather than the metallic wings? I even wrote an earlier piece that ended up broken into two parts; about this very thing. I even used how tampering with the “616” past, as Legion did, which resulted in the (accidental) death of Charles Xavier led to the Age of Apocalypse. So… how has the “616” X-Men being yanked out of the past not also triggered a similar result? Essentially the very thing that Ed Brisson is basing this “Extermination” on when he said:

So, what makes Extermination odd is that it is about the original five X-Men (once again, focusing, what appears to be the time displaced X-Men), but then, it seems to take place in the future (since it seems to revolve around Ahab and the Hound program; and that Marvel even said:

The highly secretive series, brought to life—or death—by writer Ed Brisson and artist Pepe Larraz, tells a story set 20 years in the future as all of mutant existence is on the brink. 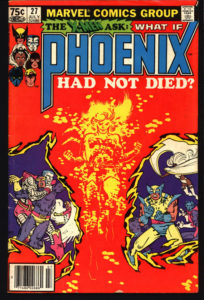 So now our troublesome time displaced mutants, who got yanked out of the future, into the present, are now also in a messed up future. And why is it 20 years in the future? And why is it the original X-Men? Where are the other mutants? I am sure it will be all uncovered in this book, but this book – let’s face it – is nothing more than an (ongoing?) What If…? issue because whatever they write in this grim future, will probably never truly come to pass for Marvel (similar to Days of Future Past, or any of the alternate realities we’ve seen others come from, such as Cable and Bishop). So they will have the liberty to kill and do whatever they want in this series, because it truly has no real consequences to the actual future of Marvel characters.