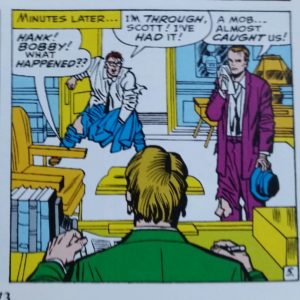 Others on there, such as Xavier Files explained that it was all “explained” in All New X-Men #19 – that the Universe “fixed itself.” I’ve gone back and re-read that issue, and it does “explain” that the Universe “fixed itself” – but I don’t buy it. It comes across as lazy writing, when they realized “If we took these characters from their own time line,

there should have been drastic consequences! We need a way to explain this… how about this… the Universe… fixes itself? Right? Golden, huh?” Xavier Files also said that time travel in the Marvel Universe is never consistent. Which is true, when characters are time traveling to alternate realities. But when they’re pulling from the same reality, as I mentioned before, we got Legion Quest/Age of Apocalypse. It’d seem logical that the same thing would happen. 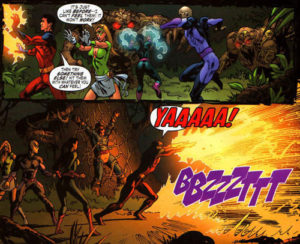 As I sat here writing this, I thought, “They really missed a chance to do something special with this.” Imagine – for Professor Xavier, the X-Men suddenly vanish (after the events of Uncanny X-Men #8). Professor Xavier pulls another team together to go find his X-Men (which they never do because they’re time misplaced) – so that team remains and becomes the new X-Men; and thus the Universe “fixes itself” by making a new team of X-Men to have the same battles the original X-Men had. And this new team of X-Men, goes to visit Krakoa to find this mutant that’s been detected. They get captured – so Professor Xavier pulls another team of X-Men, which includes the team we all know – Wolverine, Nightcrawler, Banshee, Colossus, Storm, Sunfire, and Thunderbird. Now, what if that team that’s been captured by Krakoa was none other than Vulcan, Sway, Petra and Darwin? 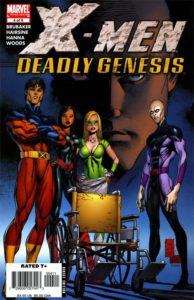 While I hated the Deadly Genesis retcon with unbridled passion, I do believe, had they explained that they became the new X-Men after the original X-Men disappeared, and fought all those battles the original X-Men were supposed to fight – I think that might have proven to be a very neat and interesting twist.

Instead, we have these time displaced X-Men, who were pulled from their reality, with no dire consequences or changes made to the world or timeline. It just seemed they were pulled into the 616 Universe for one reason, and one reason alone. Writers wanted to write these characters (Cyclops, Beast, Jean, Iceman, and Angel) without any strings attached, so they wouldn’t have to deal with continuity and that they could do whatever they wanted with these iconic X-Men characters and make it all seem very important. But a story without consequence or change is utterly boring; and I think that’s why I ended up eventually dropping All New X-Men, because the drastic changes I had hoped to see in that series were not happening. I’ve said it before, I’ve been enjoying X-Men Blue. But I also enjoyed Uncanny X-Men when Cullen Bunn was writing it; and if I had to chose between which two books I would rather see keep going, it would have definitely been Uncanny X-Men.

More food for thought! Thanks all of you who engaged me on Twitter about my previous post; whether we agreed or not, I love having these conversations!