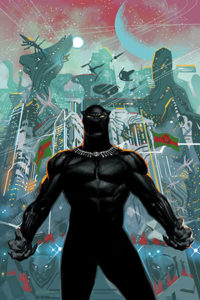 So Marvel’s been leaking out news about this new “Fresh Take” on their comics (a fancy way of saying, they’re relaunching some books with #1 – again). One of their newest ones to be mentioned is Black Panther, which is no surprise, considering the block buster success of the movie (and Marvel was pushing Black Panther pretty hard before the movie came out; even having him get married to Storm, to probably draw in some of the X-Men fans into checking out what’s up with Storm). The writer will be Ta-Nehisi Coates and the pencils will be by Daniel Acuña.

I am, admittedly, curious what they will do with Black Panther. Will the focus be in Wakanda (like the cover seems to suggest)? Will we be seeing Klaw as how he appears in the regular Marvel Comics, or will the movie affect his appearance, and make him human looking? Will Man-Ape drop the ape get up and just have the furs? I am curious just how much of this incredible (and very successful) movie will impact the layout of the comic itself. 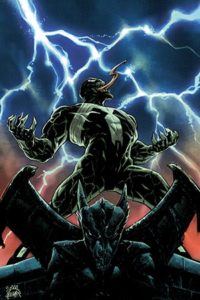 Donny Cates will be writing, with pencils by Ryan Stegman, the newly launched Venom book. The cover looks absolutely incredible – and might be enough to at least give this book a shot (though I admit, while I’ve liked Venom; I never cared for him as his own book; I loved him as a villain or anti-hero). Marvel has tried so many things with Venom lately – the Anti-Venom thing, the Space Venom thing, and on and on. But this looks to be more like the “down to basics” version of Venom. With a (anti) hero/villain like Venom, I suspect we will see quite a few Spider-Man appearances; but I am hoping they’re able to branch beyond that and include the vast roster of other characters that exist in the Marvel Universe. I think with a book like Venom, it’d be fun to bring in some obscure villains/heroes that have run into Spider-Man (Puma? Quicksand? Swarm? I say bring them on!) 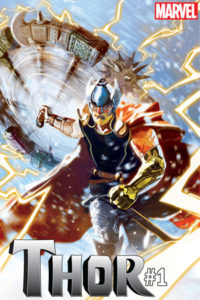 Jason Aaron returns to writing Thor Odinson (as it seems Jane Foster/Thor ends up passing away) with pencils by Mike Del Mundo. For reasons I don’t know, because I couldn’t follow Thor: God of Thunder by Jason Aaron or anything that came after that… I don’t know why Thor has a golden arm? (Maybe he thought Winter Soldier looked cool? Or Cable?) And not entirely sure why his hammer also appears to be made of gold (Midas Touch anyone?), but apparently he goes through several of them during a fight with Juggernaut. I suspect from the things I have read this is going to be a very different Thor, which means, for myself, this is going to be an easy pass. Jason Aaron is a talented writer – millions of folks love his writing – but it’s a style I am not a fan of personally (but that obviously doesn’t make him a bad writer, just to be clear). The main story will be about the artifacts of Asgard being scattered all over, and Thor has to go reclaim them. 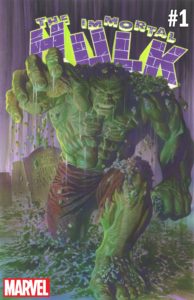 Next on the line is The Immortal Hulk, being written by Al Weing and penciles by Joe Bennett. This takes place after the second Civil War in Marvel Comics, where Hawkeye simply put an arrow through Bruce Banner’s brain, to stop him from becoming Hulk, and killing Bruce Banner in the process. Hawkeye explained that Bruce told him to do it at some point. (Bad story telling, anyone?) Anyway – the Immortal Hulk is about Bruce Banner’s corpse arising as The Hulk (at night is what the preview says; but I imagine that’s just for the horror effect, and I doubt said Hulk is restricted to only rising at night). So now, Bruce Banner will be back as The Immortal Hulk while Jennifer Walters will be in the Avenges, simply as Hulk as I understand it. That’s not going to cause any confusion. 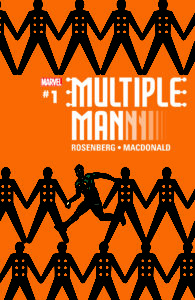 Another one coming up is a five issue limited series about Jamie Maddrox returning as Multiple Man – this, I guess, after coming back (or somehow surviving) his death with the Inhumans Terrigan Mist. This will be written by Matthew Rosenberg and art y Andy MacDonald. Ideally this means, we might be seeing an X-Factor book in the near future again? I can hope anyway…

Another book coming out is Cosmic Ghost Rider, who – I guess – appeared somewhere in Thanos. This will be penned by Donny Cates.

They say there’s more coming. So we shall see… and share thoughts as the news breaks.