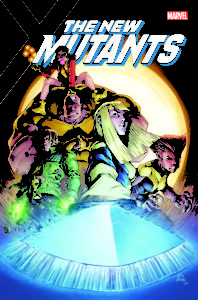 So for those of you wondering where Illyana (Magik) went – well, she’s about to pop up in New Mutants: Dead Souls.

Based on the cover; we can see Magik, Wolfsbane, Rictor, Strong Guy and Boom Boom. The book will be written by Matthew Rosenberg (who is writing Phoenix Resurrection) and artist Adam Gorham (who worked on Rocket).

Apparently, from what I’ve gathered, it looks like Karma has gone bad (again, sigh) and will be manipulating her former teammates. The issues will see the team fighting off some supernatural threat; which seems to tie into what we saw in the New Mutants movie trailer; where it seemed to be a supernatural horror story. The book launches sometime in March of 2018. With a title like Dead Souls I am curious if we will be seeing mutants who have gone from the land of the living, to the land of the dead, surfacing up in this book. Seems likely between the title and the confirmation that it’s a “Supernatural” theme limited series.