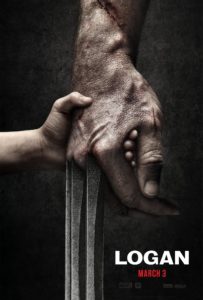 Riding on the hype of the recent Guardians of the Galaxy teaser that was released, we just got a trailer for the (last?) Wolverine movie, Logan.

The trailer opens with the haunting melody from Johnny Cash’s song, Hurt. The trailer gives a hint that the world of mutants has drastically changed as Logan explains, “The world is not the same as it was… Mutants… they’re gone now…” Is this a reference to the comic books when  Wanda/Scarlet Witch shouted, “No more mutants!” and mutants across the world lost their mutant abilities?

I think it may be, as this is further evidenced that, whatever has happened, has also impacted Wolverine/Logan. Because his mutant ability should prevent him from aging (at least in the comics), and now we see he’s clearly aged. While some would say, that perhaps Wolverine aged because it’s set further into the future; you’d have to ask yourself, then why is Professor Xavier still alive? Also, there’s a scene, where I assume it’s Logan’s hands, and we can see they’re bloody; as if he had extended his claws, and his healing factor did not kick in to heal it.

Also in the video, we see Charles Xavier laying in – what appears to be an unusual hospital type bed… and then we see a young girl, who Xavier hints is, “Like you [Logan]… She’s a lot like you.” This is clearly X-23, who in the comics, is a young girl named Laura Kinney. She was made using a damaged DNA sample of Logan; and thus, like Logan, has heightened sense, and a healing factor. In the comics, like Logan, she also has her bones covered in Adamantium; and has two claws that can extend from her hand, where Logan has three, and she also has claws (talons?) that extend from her feet, unlike Wolverine.

I am not able to figure out who the person, covered in head to toe is – with the cloth and sunglasses, seen only for a brief second. (Pretty sure that’s Caliban. – Maico)

Since the movie apparently features, The Reavers, who in the comics were men that were part machine/part human – I assume the guy, with the cybernetic hand and blond hair who puts on the sunglasses is none other than Donald Pierce (in the comics, formerly of the Hellfire Club, but would go on to lead the Reavers; and like the person seen in the movie, has a cybernetic hand).

And my guess, at the end, with him standing their with the shovel, and the young girl comes to hold his hand; it’s Professor Charles Xavier who has been buried.