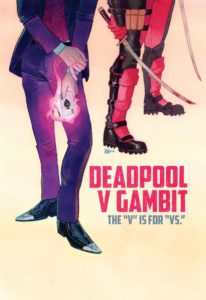 The smoothest most handsomest mutant con man in the Marvel universe meets the ugliest mercenary on planet earth in a funny, quick witted series that reunites the on-again off-again X-Men; Gambit and Deadpool.

The story opens with the two ambiguous heroes both waiting in line at a coffee shop. Things tense up after they recognizing each other and try to remember if they left off on good terms of not. The story goes into a flashback as they recall when last they met.  The two were partnered up in a heist that ended up with them being triple crossed and at odds with each other. This first issue is packed with action, humor and ridiculousness. Acker and Blacker do a good job of pairing this odd couple quite well. Both so self-serving that they can’t even tell when they are being played by one another.

I am not a fan of Danilo Beyruth’s art in this book. His faces are just… bad. It works well for the disfigured Wade Wilson, but Remy Lebeau looks like a wrinkly old man. Not as terrible when masks are worn but overall tough to look at.

Gambit is my all-time favorite character. Deadpool is up there as one of the most popular and interesting characters in comics. They would really have to screw this series up for me to not like it. I feel like as long as they keep the story small, personal, funny and action packed it’ll be fine. The art is terrible but not terrible enough to turn me off from a Gambit v Deadpool story. If you like either character, I recommend this book. 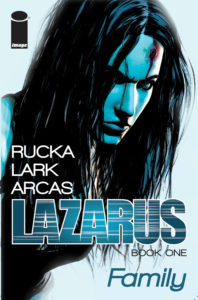 Dystopian futures are a popular setting in comics. Post apocalyptic environments filled with warring tribes, famine, suffering and a few at the top controlling the masses. Lazarus fits right into this premise….. and you know what? It does the genre justice.

The story is a cool mashup of a post apocalyptic world under a feudal governance. Families serve as governors of territories, they are the Kings and Queens of their land. Serfs work the land for the families and Knights,  in this case called “Lazarus’” protect the territories, the serfs and the family’s honor. The rest of the population are known as “the waste.” The waste are the overwhelming majority of the population with no lot in life. Poor wretches wandering the planet with no purpose.

The Lazarus are bio-engineered family protectors trained in combat and programmed for loyalty. They also serve as judge, jury, executioner and representatives for the family.  Whatever dirty job or deed that needs to be done, they send the Lazarus.   Our story revolves around the Carlyle Family and their female Lazarus Forever.  Forever is the family’s female protector who is treated lovingly by the family patriarch and like a younger step sister by the biological adult children. Forever’s father has tasked her with investigating a recent attack on the family’s seed bank. She has a feeling that this attack may have been an inside job by a member of the Carlyle family in a push for power. Forever has to navigate the treacherous waters of a family feud to figure out who is the betrayer all while maintaining her undying loyalty to her father and family.

Michael Lark is a great artist. You can quickly tell that Lark likes to draw settings and backgrounds. Not in an elaborate sort of amazing fantasy way but in a way where his scene transitions make you feel like you are watching a movie. The color tones and palettes change which each new location all while maintaining the feel of a post apocalyptic environment. Lots of flat brown, grays, reds and blues.

This is a great introductions to the Lazarus series. You get a feel for the layout of the land. Forever meets and interacts with other families and their Lazarus. You feel the tension and deceit as she serves as her families negotiator, enforcer and protector.  This book contains a ton action, family drama and character development. I highly recommend picking this one up.

1 Response to Comic Catch Up!