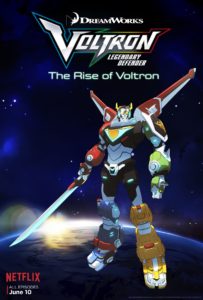 The nostalgia is real!

The 80’s favorite robot lions are back and better than ever. Voltron: Legendary Defender is a new Netflix animated series that debuted on June 10th, 2016. This show is  good…like really good. For those of you not familiar with Voltron; Voltron is a show about a group of humans that pilot five mech lions. The individual mech lions, when needed, combine into a giant ass kicking robot that flies around space kicking ass, looking cool and selling toys.

For the past millennia, the evil Galra Empire has been on a rampage across the universe conquering planets and civilizations in search of Voltron, the only force powerful enough to stop them. The whereabouts of the five robot lions are unknown and presumed lost. During an ancient attack on planet Altea by the Galra Empire, King Alfor scattered the lions across the universe to hide them from the Galra until the time came when a worthy group of Paladins could take up piloting the Voltron Lions once again.

Fast forward to the future. The Blue Lion is discovered on Earth and awakened by a group of human space pilots. The pilots are swept across the universe to the planet Altea where they meet Princess Allura. The princess briefs them about the millennia long war and the significance of the humans awakening the blue lion. The pilots reluctantly set out in search of the remaining lions in order to form Voltron and defend the universe.

Voice Cast and Animation: A+

oltron: Legendary Defender has an amazingly talented voice cast, top among them being Jeremy Shada as the cocky blue paladin, Lance. Jeremy Shada is best known as the voice of Finn The Human in Cartoon Network’s animated series, Adventure Time. Jeremy brings that same lighthearted humor and youth to this show that he brings to Adventure Time.  Th

e Walking Dead’s Steven Yeun voices the brooding red paladin, Keith. Steven is best known for his role as fan favorite, Glenn. Steven is the wildcard   Flight of the Concord’s Rhys Darby,aka Murray, voices the goofy Coran. Coran is basically an animated version of Darby. This character brings a silliness to the role that is in line perfectly with Rhys Darby’s comedic style.  Arrow’s Bex Taylor-Klaus voices the green paladin, Pidge. Bex was the Roy Harper’s (The Red Arrow’s) friend, Sin,   in the early seasons of CW’s Arrow…you know ba

about vigilantism and not a super hero soap opera…but I digress. Bex was cast perfectly as Pidge, as is discovered

The animation uses a combination of American style anime reminiscent of Nickelodeon’s Avatar: The Last Airbender. CG graphics are used heavily but do not take away from the art but instead add a sharp element to the sci fi series. The fight scenes are fast paced and intense. The action and interaction with the paladin’s is fun to watch regardless of whether they piloting the lions or not.

Voltron: Legendary Defender blends beautiful animation, an amazing voice cast, great writing, amazing action and tons of humor all while keeping loyal to the original show content. After completing the series I felt there was a pace in the writing, humor and action that felt familiar but I couldn’t quite put my finger on….then I found it;   Lauren Montgomery,  Joaquim Dos Santos and Tim Hedrick, known for their work on the Avatar: The Last Airbender and its sequel The Legend of Korra, are the showrunners and writers of Voltron: Legendary Defender.

So let me put this into perspective here; Voltron: Legendary Defender is a Netflix show, written and produced by the Avatar: The Last Airbender/The Legend of Korra creators and writers and voice acted by members of Adventure Time, The Walking Dead, Flight of the Concords and Arrow.

WHY ARE YOU NOT WATCHING THIS SHOW RIGHT NOW!?!

This entry was posted in Review and tagged animatedseries, netflix, voltron. Bookmark the permalink.