The New Defenders #141 (The Coloring Book) 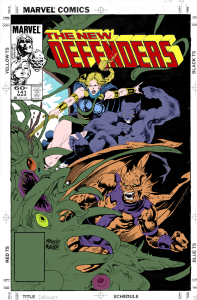 It’s going to sound crazy, but then maybe not. Remember, when you were a kid, how much you enjoyed coloring? Well, something that always helps me feel better – even now, is coloring. While Tom B. of Marvel may post some seriously over the top snarky comments (he claims because people are snarky in their questions; but I am pretty sure he gets sincere questions; they’re just not as fun to answer and be snarky!) – at any rate, he frequently posts the making of covers, posting both the (final) colored version as well as a completely B&W version of the cover.

Frequently, these covers, if they were a big part of my comic book collecting (such as Uncanny X-Men, Avengers, Defenders, New Defenders, New Mutants, New Warriors, Darkhawk just to name a few) – well, I will take them and then recolor them myself, using an old version of Paint Shop Pro (and I say old, because I use version 8.0, when the program still belonged to Jasc, rather than Corel Draw). Not that I have a problem with Corel, heck I wish I could afford to get the latest version. But money being what money is, and not using the paint program more than just a hobby, sadly (mental) justification can not be made within my own head.

All of that to say, here’s my quickly colored version of The New Defenders #141.