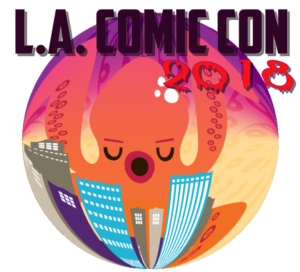 I want to preface this with; we got there, on Saturday, around 4:30pm (maybe closer to 5pm). The Con was open Saturday, until 7pm.

I am not sure why that matters, but I feel like if you’re reading this, you should have the facts.

Now, the previous versions of LA Comic Con (or back then, Komikaze, then later Stan Lee’s Comic Con, to now being called LA Comic Con) – the Con was always happening and alive. Even when we would leave near the tail end of the Con for the day, there were still people bustling about. And usually at the end of the day, all the Cosplayers gathered in the foyer area for photo opportunities with tons of admirers.

The first thing I noticed when I strolled inside for Saturday, the foyer was pretty empty. I was expecting it to be full of Cosplayers and people taking pictures. There were people and there were cosplayers; but not nearly the volume that’s normally there in previous years. Previous years, you’d have to be careful of not stepping across someone’s photo; this year I walked through there with ease, and no issues of stepping in front of photographers.

You’d think, as someone who is definitely an introvert, this would be a plus, right? Well, as Charles and I stepped into the Convention Center itself; even the people in there were sparse. I thought, “Well, this will be kind of nice.”

But it quickly became evident to both of us (I thought it was just me, until Charles said something) – that something felt… off. As we walked around, we came up to where the Ghostbuster car was and I noticed, the food court was closed; the reason became clear because they had food trucks outside – this was a great move. The food trucks provided a much wider variety of food, at better prices, and way better quality.

But as we continued to walk through; there was no… energy? No excitement? No chemistry? I can’t describe it, exactly – but both Charles and I paused and talked about how there was something odd about the Convention. We then noticed there was no Marvel or DC booth, which is odd at a Comic convention. That’s like watching a Star Wars movie without lightsabers or a Star Trek movie where they don’t have the Enterprise or say “Beam me up” at least once. As we walked around, I considered getting another Lightsaber and figured I’d try to hunt down Ultrasabers (only place I get mine), and they weren’t even there. (I am not sure if that has anything to do with a fiasco that happened at Phoenix Comic Con – but they were at this con last year). Some other company was there that sold lightsabers, and while they looked sturdy enough, just didn’t feel like they had the same feel of Ultrasabers.

As we walked around (and we walked the entire con, very quickly, due to what appeared to be low attendance), there was this big row – where the vendors were separated by like 30 feet, and I told Charles, that it felt like I was at a garage sale, more than a comic con. None of the vendors seemed to have any energy or interest in engaging anyone. Everyone was just sitting in their booth. Even when I approached a few booths, none of the people behind the desk engaged me. The actual comic book selection at this year’s con was so absolutely sparse, it was actually a little on the pathetic side.

Had this been my first time to this Con (granted, first time at it being called the “LA Comic Con”), I probably would not return to it next year. Because I remember writing about the 2016 Comickaze thing – and talking about there were so many people inside and outside on the foyer area, that moving was almost impossible. This year, it was a polar opposite, that seemed to go too far to the other extreme. I remember the Stan Lee Comic Con 2017, feeling like the right balance.

I hope that next year, whatever it is that I felt like was off (because, I don’t know if it was just me and Charles who felt this way) – but I hope they fix it, and that next year, there’s the perfect balance of people (fans), cosplayers, vendors – and that the energy level is back. Because this… this felt depressing.