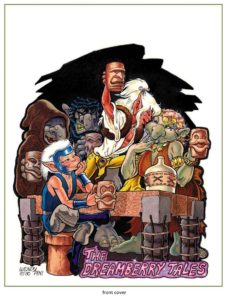 ElfQuest #7 really starts the true nature of he Quest of the original series.

It opens with Cutter and Skywise going through the troll caves and entering the lands that were once their woodland home; and see that grass has begun growing and some of the stumps have branched out; but the land over all has burned to the ground; even the stream that was once vibrant and full of fish, now is but a dribbling puddle. The Father Tree; the largest tree where all of the Wolfriders once dwelt and called home, shaped by their ancestors is nothing more than a hollow, gutted stump. 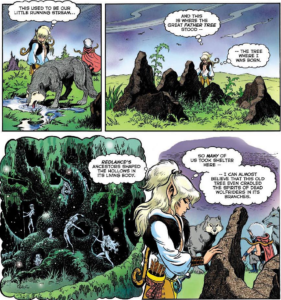 Inside the stump of the Father Tree, Cutter finds the now melted remains of his father, Bearclaw’s, necklace. Cutter notes that even when his children, Ember and Sunspot, grown will never see the forest in the former glory; and that not even the eldest of trees will be able to support their weight, because the trees would still be saplings.

Cutter and Skywise also discuss what may have happened to the trolls in the caves; since they were not there either. Could they trolls have left in search for game? Or did something more sinister happen. You can bank on the fact that even this far back, Wendy has something planned that’s revealed much later in this original quest, as to what happened to the original trolls. Well, you find out this issue – but the … consequences are felt much later in the series, as neither Cutter not Skywise (nor their wolves) catch the scent of a pair of figures watching them. 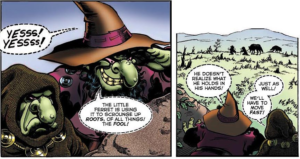 It turns out to be none other than Picknose and Old Maggoty, of the trolls – and they make note that Cutter has New Moon (his sword). Again, the significance is revealed this issue, but the story doesn’t fully unfold until nearly the end of the series.

When Cutter and Skywise regain consciousness, they’re shackled and Picknose is seen with New Moon. Cutter lunges at him, with less than spectacular results; and a bit of humor. Old Maggoty mentions to Oddbit, Picknose’s love interest, that Picknose will finally amount to something now that he has New Moon. 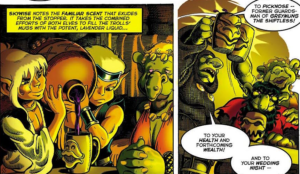 Cutter and Skywise are made to be servants to the three trolls, while they celebrate Picknose’s apparently change of fortune – while this hasn’t been made clear yet, why the sword is so important – the first piece (literally) is about to be revealed. 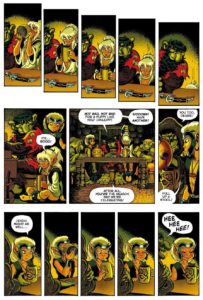 Picknose invites them both to try the drink which they’re consuming and enjoy in the merriment, knowing that neither of them has tasted it before – and would immediately feel the effects – which they both do. 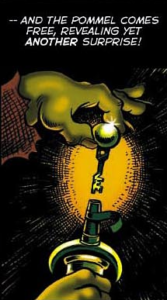 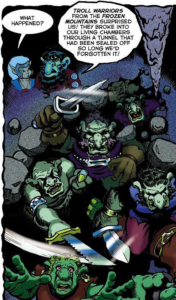 After sharing some drinks and some thoughts, Skywise finally decides to ask Picknose what had happened to the other trolls in the cave – and that’s when he shares the grim tale of other trolls – which he calls Frozen Trolls from the North – had come – and that they were vicious and cruel and killed and enslaved all that they found. Cutter and Skywise are shocked to discover that there’s other trolls out there – much like how they had discovered other elves at the Sun Village – and spurred on the idea that there might be even more elves out there. 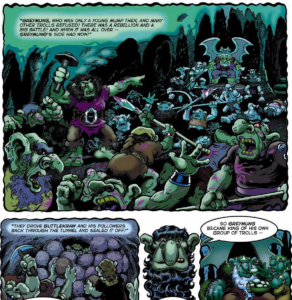 Picknose goes on to explain how Greymung, the King of Trolls that Cutter and Skywise were aware of; and how he had apparently driven back another troll called Gutterkraw, and drove them back and sealed them off, long ago – when Greymung was still young. (You can see where this is headed, right?)

When Gutterkraw returned, the trolls were not fit to fight against him, and no one was strong enough to stop Gutterkraw; so those that were not killed were enslaved.

When both Skywise and Cutter question the idea that there’s some great treasure; Picknose assures them that it’s true – and that he has the word of Two-Edge himself; who they explain is part elf and part troll. Neither Cutter nor Skywise can believ 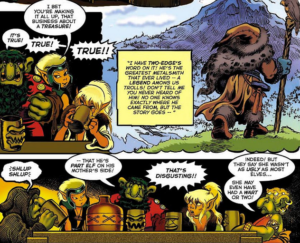 e it, and Oddbit adds, “Rumor has it she wasn’t as ugly as most elves; and may have even had a wart or two!”

Now, you might be thinking – that’s really weird, right? Well, rest assured – it plays a major role in what’s coming up in the Original Quest and is – beautifully, yet tragically – explained how it all happens… and it’s not what you think, or maybe it is. But Two-Edge plays a very, very, very key role in this entire quest that Cutter has put himself on. 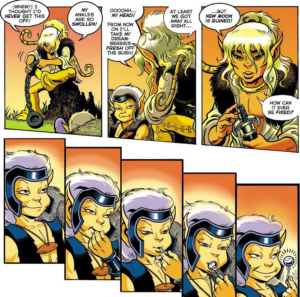 Cutter and Skywise do eventually make their escape; but Cutter doesn’t have the key, as Picknose had put it in his pocket. But in the struggle with Skywise, he had managed to take the pummel and end up with the key – much to the dismay of Picknose and the others!