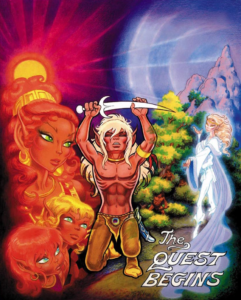 ElfQuest #6 is where the book truly takes a turn. It fast forwards time, considerably, and we see that not only have Cutter and Leetah remained together; but they have had two “cubs” (children) named Ember (female) and Suntop (male). Both children are still young, but vastly different. Ember seems closer to Cutter (more of the wild nature to her), while Suntop is far more reserved, and has potential for magic – much like his mother, Leetah.

Also, from the very start of the issue, we’re given a hint of something sinister is at play, possibly, when the Savah, the Mother of Memory (from the Sun Folk) travels out of her body, using Astral Projection 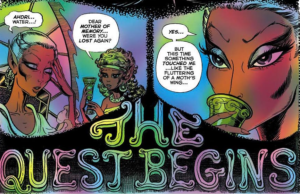 – and this time, in the darkness encounters something – noting that something had touched her, gently, like a fluttering of a butterfly wing. (That will come into play in the very near future!) But as a reader, at the time ElfQuest came out – readers were chomping at the bit as to what it could have been – and what would shake up an elf, so powerful in magic, like Savah? 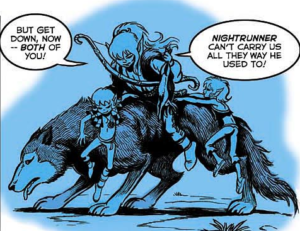 You will find that nothing in the original ElfQuest is said just as fluff – almost everything is foreshadowing something else. Such as the scene when Ember jumps on Cutter’s back while he’s on his wolf, Nightrunner. Cutter remarks that she needs to get off because Nightrunner can’t carry them all like he used to – and take a good, close look at Nightrunner’s face in that panel. That little bit, added to the fact that Cutter explains that Nightrunner no longer leads, nor runs with his pack, because he’s too old – and that if he goes back, the wolves would kill him. 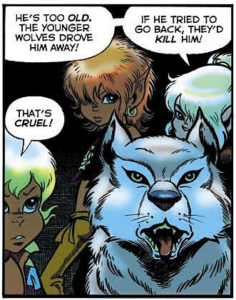 Make no mistake, Nightrunner’s age is about to come into play in a not so distant story – and if you do not have a box of tissue with you when you read that story – you’re going to be reading it with the most bleary eyes in the world – that, I can promise you. ElfQuest excels at yanking on your emotional chain throughout the entire original quest.

What they do – and what they pull off – and how they execute it all – makes the original run of ElfQuest an unparalleled and unmatched emotional comic book. You’d think reading it is like riding a rollercoaster – you’re going to have your up moments, where you’re cheering wildly; you’re going to get tossed around, unexpectedly at some of the turns; your world will get turned upside down, and when the ride is over – you’re going to remember that wonderful mixture of emotion. 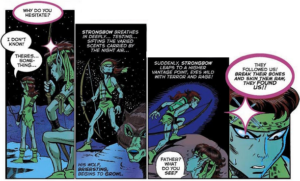 Anyway, back to the comic – we learn that Moonshade and Strongbow’s son, Dart, has grown up to be a young man as well. And while out practicing his hunting skills with Strongbow, Dart spots something out in the desert that’s about to change everything for the Wolfriders and Sun Folk – and by Strongbow’s reaction, it’s not hard to guess just what it is!

The Wolfriders gather and it seems that the humans are about to be executed, but the ever gentle Redlance is the one who asks Cutter to wait – so that the humans can explain themselves. The humans explain that the fire that they had started raged uncontrollably, forcing them to linger in the center of the lake, waiting for days, until rains came and put the fires out. But by then, all had been lost – there was no possessions, no game, no food. They were forced to walk in the direction where the sun goes down – before they encountered another tribe of humans who took them in. But the elder brother of the human explaining this had fallen mentally ill and they would not leave him, so they were exiled – and they wandered through the sands until finding them. The leader explains that his brother, Dro, will soon be dead, as he no longer even sees or acknowledges those around him, in his madness.

Woodstock demands justice, and Redlance tells Woodstock that if he can kill the young, human boy, then the others can be killed too. But Woodstock can not – he lets loose an arrow but intentionally misses by a centimeter. In that moment, however, death comes for Dro, and the older human clasps his chest and falls off the starved horse. Cutter 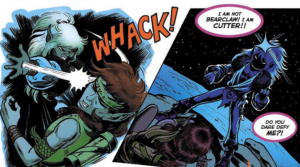 tells the humans to leave the dead one there as a warning to any other humans; and that the rest are free to go – but if he sees them or any other humans, ever again – he will kill them. Strongbow is furious that Cutter let them go and the two engage in a silent battle of sending; but it’s Cutter who wins.

Something that the humans said, sits heavy with Cutter. They had encountered other humans on their escape from the dead woods. And the Wolfriders had encountered the Sun Folk. What if… there were even more elves out there? Cutter tells his tribe of fellow Wolfriders that he will give himself one year to go out and find other Elves – and if he can, unite them all. He tells everyone that he is to go alone and none came come with him – that way everyone is in one place. However, Cutter’s best friend, Skywise, will have none of that and insists on going – citing that he’d rather face Cutter’s wrath than Leetah’s wrath, after he had already made the promise of keeping an eye on Cutter.

They retrace their steps through the desert, and even through the now abandoned troll caves, and see nothing but ash of their former home – unaware that several figures are watching them!