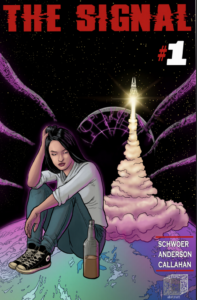 The folks at The Signal Is Real have kindly allowed me to review their first issue of The Signal. I enjoyed it – the art, colors and writing are all spot on. I wish we got some background on the friction (hatred!) between our star, Annie and the military jerk, Ben, even if it was just through a few lines of dialogue to reflect on whatever past they have to create that angry tension. (I mean, really, Ben comes off as a jerk, right from the first panel – and that’s putting it very, very mildly). But there’s certainly a sense of something happened between them previously! But it’s the first issue! So undoubtedly this isn’t the end we will be seeing of interaction between Annie and Ben (or I hope not – he seems to be the perfect pain in the rump for Annie, because he is so real…) And Annie herself, reminds me a bit of Jessica Jones (mostly what you see on Netflix). She’s the tough, take no $#!+ from anyone (man, woman, doesn’t matter), who will throw down, no matter the odds, take some hits and keep on standing – who has also, has an affection for the bottle.

The Signal reminds me if Jessica Jones was in a crossover with The X-Files meets “Impending World Doom” type of show. It’s good. It’s fun. It’s entertaining. But definitely for adults (because it’s not your traditional kid friendly comic – plenty of “adult” words used in this!) So, stop by their website and give it a chance!