We have lost a hero – Len Wein. 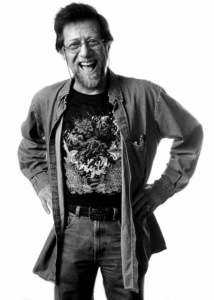 If you’re here, there’s a good chance it’s because you read comics. And if you’re here, you know how often Maico and I discuss the X-Men in our podcasts, and how important the X-Men were to us, growing up.

A legendary figure helped co-create the very X-Men that both Maico and I enjoyed the most – Wolverine, Colossus, Storm, Nightcrawler.

Of course, he’s done much more than that – but, because Maico and I were so attached to the X-Men growing up, specifically these characters, I wanted to focus on his work on the X-Men, because that’s where the writing will come from the heart. 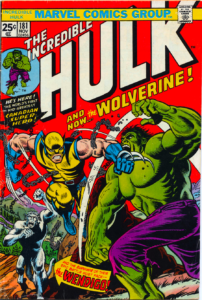 Without a doubt, his biggest creation in the X-Men world is none other than Wolverine. Initially appearing in The Incredible Hulk #181, I still remember when my wife got this for me as a part of my birthday present – and, unfortunately, not when it initially came out (we were not together yet), but many, many, many years later, when the comic was already fetching a very pretty penny because of the success of Wolverine.

Wolverine’s popularity has only continued to grow, since then. With the X-Men franchise movies from FOX Studios (despite how much Maico and I may rant about them), they have helped put the X-Men into the minds and hands of a newer generation; which eventually led to the solo movie, based on Wolverine, entitled Logan, which gained much more success. 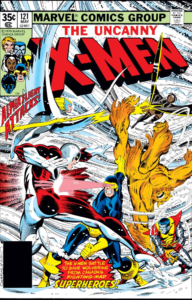 I remember when my friend gave me Uncanny X-Men #121, I was in the 4th grade, and it – along with Avengers #159 – was my plummet, free fall into the comic book world. I had picked up other comics before this, Aquaman, Superman, but they never captured me. I had picked up those books, mostly because I knew them from the Superfriends cartoon. But who were these X-Men? I had never seen any cartoon about them – but they looked very cool, very vibrant. The art, the story, all of it was so incredible.

This issue in particular, remains one of my favorites, not only because it was, indeed, my introduction to the X-Men, which immediately became my favorite characters – but there’s this great splash screen on this issue where Alpha Flight (who I also loved their look!) was going to face off against the X-Men, because Alpha Flight needed to take Wolverine back to Canada. (At the time, I wasn’t sure of why Alpha Flight wanted Wolverine, or even really knew anything about anyone, being my first issue). 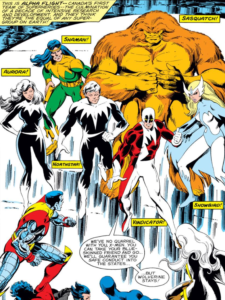 But that splash screen was down right incredible. The odds certainly were not in the X-Men’s favor when you looked at this – and as a kid, you’re thinking, “How can they hope to win? It’s literally three against six!” But sure enough, Nightcrawler teleports out of his bonds, and Wolverine is free – evening up the odds!

I think the very first X-Men comic I bought for myself, was Uncanny X-Men #145 – which featured Doctor Doom, who I knew nothing of, because it had just come out (so my friend got his copy of Uncanny X-Men #121, two years before it was passed down to me, back in the day!) 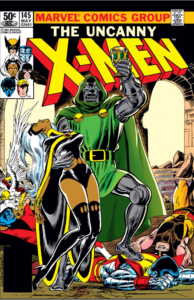 They taught me that it was okay to be different. And as someone who was 11 or 12, I was going through an awkward point in my life. I felt different than everyone else, other than my best friend (who got me hooked into comics), Charles Stevens. I never felt like I fit in anywhere or with anyone, other than when he and I were hanging out. But the X-Men allowed me to accept that. Chuck and I were best friend, and we had a pretty cool imagination, because of the comic books we were reading. 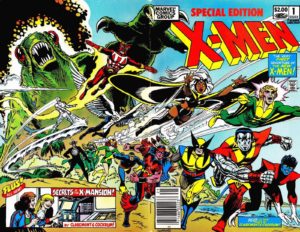 You see, had it not been for Len Wein’s co-creations of these fantastic characters, my life would have been drastically different. I’m sure, somehow, I would have still managed to come out the other end all right – but these characters than Len Wein created helped give me “friends” when I had none. “Friends” who understood me. Who were different, like me. Who were there for me, when I needed it. They were comforting. They were strong, when I was weak.

In comics, we’ve seen many characters die; and they always come back. 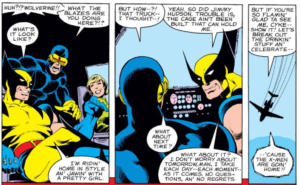 Well, in the real world, that doesn’t happen. And we’ve lost Len Wein. He won’t come back reborn as the Phoenix or anything like that. But here’s the thing – he may be gone from the world – but his work is not. The mark he’s left on so many others, just like me – continues to live on in our memory. It continues to live on the comics. Even if they kill our favorite characters, there’s the back issues that we can travel back to – and read again.

For many, they will say “they’re just comic book characters” – for me, these were my heroes. They were there for me, and Len, I hope you know you helped forge a child’s life, helped shape him as he grew to be the man he is, and fed his imagination endlessly, with the creations you’ve given the world.

Rest in peace, sir. You are, forever in my eyes, immortal.

We lost a legend today. Just heard that Len Wein passed away. The foot print he left in comics is beyond enormous and I am deeply saddened. pic.twitter.com/T13u5bUNT9